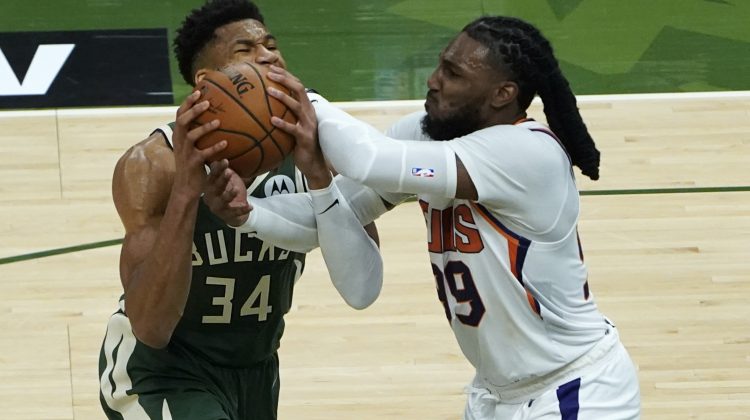 What’s new for the Phoenix Suns following a Game 3 loss to the Milwaukee Bucks? Not much, considering they’re 3-1 following a loss this postseason.

The message from Monty Williams after each of the previous losses is simple: play with more desperation. Today, it’s the same.

“They took it to us, no other way to look at it,” Williams said, describing the Game 3 loss. “They played with a great deal of force [winning] 50-50 balls and attacking the paint. We had spurts of playing the way we play but certainly not as consistent as we needed to… We were physical but they were physical from the jump. I could sit here and make excuses about what we didn’t do, but they played at a high level.”

Here’s what they’re focusing on heading into tomorrow night.

The focus and spotlight is all on Giannis Antetokounmpo. He’s scored 40 plus in games two and three, averaging 34.3 points per game this series. The Shaq references are abundant and he’s proving he is a superstar, despite what naysayers may think.

Giannis has been UNREAL over the past 2 games.

“He’s a two-time MVP,” Chris Paul said in response to people who don’t give Antetokounmpo enough respect. “Regardless of how he scores, he does it… We are going to keep trying to build a wall. He’s coming full speed every play like a running back coming downhill. Coach has a saying, we just try to get in his way.”

The Suns are short on big-man depth behind Deandre Ayton, especially following the season ending injury to Dario Saric. Because of this, Ayton’s role in matching up with Antetokounmpo is under a microscope. In Game 3, Ayton got into some foul trouble.

“I’m not going to let any of those foul calls change my aggression,” Ayton said. “Giannis has an awareness where he does put his head down going for fouls and he’s really lengthy and strong. But you just have to keep up, match the physicality and not really back down and try to brace contact. That’s where the fouls really come in.”

What Antetokounmpo is doing is remarkable. He’s the first player to score 40 plus points in back-to-back finals games since LeBron James in 2016. The Suns know they need to make it more difficult on him, even if he’s still going to go get his.

“It’s a hard truth, that you have to be able to do both,” Williams said about guarding Antetokounmpo and stopping open shots. “You have to show a wall but also have the integrity of your defense in tact on the other side.”

Book a bounce back

Following a 10 point performance on 21.3% shooting in Game 3, Devin Booker is moving forward. Following games where Booker shoots below 35%, the Suns are 9-2 and he’s averaging 25 points per game.

Drafted in 2018, Ayton is use to seeing Booker prepare for games with a relentless attitude. That doesn’t change after poor performances, but he knows Booker will always come back hungry.

“He gets pretty scary after that,” Ayton said. “Just knowing his mentality and knowing that games like that don’t really slow him down. It was just one of those games but I know he’ll definitely step up and as a team we’ll step up as well.”

Not only does Booker need to perform better, but the rest of the unit needs to execute the game plan as well.

“It’s more like what’s our team is like, this ain’t golf, it’s not tennis,” Paul said. “We all in this together. Everybody on our team took the loss hard, as we should. We never go into a game expecting to lose.”

Suns assistant coach Willie Green is reportedly closing in on a deal to become the head coach of the New Orleans Pelicans. Paul played with him on the New Orleans Hornets and respects him for everything he does as a coach.

“I’m a little biased, that’s my guy right there,” Paul said. “I know he deserves it, he’ll be the most humble head coach you’ll ever see in your life… I’m happy for the opportunity he may get.”

Game 4 will tip off at 6:00 p.m. PST on Wednesday night. If you’re in the valley and were hoping to attend a rally, you may be able to go to Chase Field to watch on the jumbo tron. However, tickets are sold out.

Game 4 at our place.

Learn the offense during season??🤯🤯🤯 @ArizonaFBall nows not the time, keep the streak going…. @NCAAFootball @12SportsAZ @Sports360AZ
View on Twitter
0
0