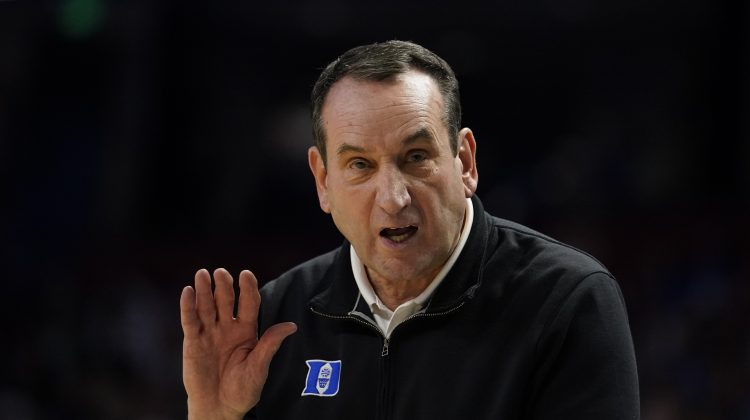 On six occasions over the long history of the NCAA Tournament, the western third of the country has sent two teams to the Final Four.

Not once has the region produced three national semifinalists.

If there was ever a chance to dominate the sport’s grandest stage, it’s this year.

Gonzaga, the tournament’s No. 1 overall seed, is alive in the West region.

Arizona, the No. 2 overall seed, is still advancing in the South (barely).

And UCLA remains very much a threat in the wide-ope East, where the No. 1 and 2 seeds are out.

The Bruins will face North Carolina, with the winner meeting either Purdue or St. Peter’s.

The Zags must deal with Arkansas, then would face Duke or Texas Tech.

Arizona gets Houston, then either Villanova or Michigan.

All in all, we give the western trio a 20 percent chance of advancing in lockstep through the second weekend and gathering in New Orleans.

Granted, that’s not much. But the scenario is far more plausible now than it was 72 hours ago.

Winner: Pac-12. After a forgettable regular season that sent just three teams into the NCAAs — and after USC was bounced in the first round — the conference has its blue bloods, UCLA and Arizona, in the Sweet 16. The former was impressive in dismantling Saint Mary’s; the latter was pushed to the brink by TCU. But the details matter not. The Wildcats and Bruins are through. Two down, four to go.

Loser: Officiating. The no-call on a 3-point attempt at the end of the Iowa-Richmond game was beyond egregious. Same with the play at the end of regulation in Arizona-TCU, which had to be either a backcourt violation or a foul (neither was called). And there have been plenty more head-scratchers. Officiating has become increasingly difficult with changes in rules and styles of play. Perhaps it’s time to consider a fourth official on the court — either for the NCAAs or the entire season.

Winner: Shaheen Holloway. The former Sean Hall guard is working magic at St. Peter’s, a small school in Jersey City that plays in the Metro Atlantic Athletic Conference. His Peacocks are just the third No. 15 seed to reach the Sweet 16 and the first team from the MAAC to ever advance that far. Oh, and They are the first team from New Jersey to reach the second weekend since Seton Hall did it in 2000 with a point guard named … Shaheen Holloway.

Loser: Kentucky. Big Blue went down in white-hot flames with a first-round loss to St. Peter’s. Assessed against the backdrops of each team’s tradition and resources, the Wildcats’ overtime loss just might qualify as the biggest upset in tournament history.

Loser: SEC. Kentucky cratered, Alabama faltered against Notre Dame, LSU went down against Iowa State, Tennessee lost to Michigan and Auburn was embarrassed by Miami — and in each case, the SEC team was the significantly higher seed. Only Arkansas remains alive. At this rate, we might have to start viewing the SEC as a football league.

Winner: ACC. Criticized for most of the season, it has roared to life in the Madness with three teams in the Sweet 16 and its two standard-bearers, North Carolina and Duke, alive and well.

Loser: Big Ten. The conference received nine bids, prompting derision nationally after its poor showing last March. We don’t see that coming to an end after it flopped in the second round and will advance just two teams, Michigan and Purdue, to the Sweet 16.

Winner: CBS. The TV ratings for the opening weekend haven’t been released, but the network is undoubtedly salivating over the UCLA-North Carolina duel in the Sweet 16. That’s scheduled for Friday, with a 6:45 p.m. (approx) Pacific tip.

Loser: USC. Incredibly, the Trojans lost as a higher seed to an opponent that was 1-of-14 from 3-point range. How? Well, they committed 18 turnovers and forced only three by Miami. Bottom line: USC won 26 games because of a soft non-conference schedule, collected just one victory of note (at home against UCLA) and dropped four of its last five. The Trojans just weren’t very good.

Winner: San Francisco. A city that cares little for college basketball might stoop to show a passing interest if Duke and Gonzaga meet Saturday with the Final Four on the line. (As long as the Giants don’t have a spring training game that day.)

Loser: Mountain West. What began as a celebration ended in abject failure. The conference sent four teams to the NCAAs, the most since 2013, and all four were eliminated by the close of business Thursday. It was the fastest wipeout for any conference with four of more bids that we can remember.

Winner: No. 12 seeds. New Mexico State and Richmond continued the seed’s rich history of upsets, with the Aggies taking down Connecticut and the Spiders slaying Iowa. At least one No. 12 seed has advanced to the second round in 12 of the past 14 years.

Losers: Us. With Duke in the Sweet 16, the Mike Krzyzewski hagiography will continue for at least four days. (Psst: The Blue Devils are no different than anyone else, if you know what I mean.)

Winner: Conference diversity. Nine different leagues are represented in the Sweet 16, led by the ACC and Big 12 (with three each) and including three that don’t play FBS football: the West Coast, Big East and Metro Atlantic.

Winner: Capital One commercials. Bird and Magic together? More, please.

Loser: NCAA selection committee. Pairing USF and Murray State made for a phenomenal first-round game — and assured one would be eliminated. We won’t soon forget that decision. Also, the committee did Houston wrong with a No. 5 seed, and the Cougars are out to prove it.

Winner: Texas (the state). Five teams won their first-round games and two advanced to the Sweet 16. Pretty good for a place where Friday Night Lights definitely doesn’t refer to visibility in gymnasiums.

Loser: Iowa (the school). The Hawkeyes were one of the top offensive teams in the country with one of the most gifted scorers in Keegan Murray. But they stumbled as a No. 5 seed to Richmond and have failed to make it out of the first weekend at any point this century, despite being a No. 7 seed of higher six times.

Winner: Bad beats. It doesn’t get much worse than putting money on Duke as an 18.5 point favorite and watching the Blue Devils build a 19-point lead, only to have Cal State Fullerton convert an uncontested dunk with four seconds left to reduce the margin to 17. That’s why you should never gamble, boys and girls.

Loser: My bracket. Yeah, yeah, the Hotline picked Kentucky to win the championship and will have to live embarrassment with that for 52 weeks. On the bright side, I ignored my own advice and bet zero dollars on the Wildcats.