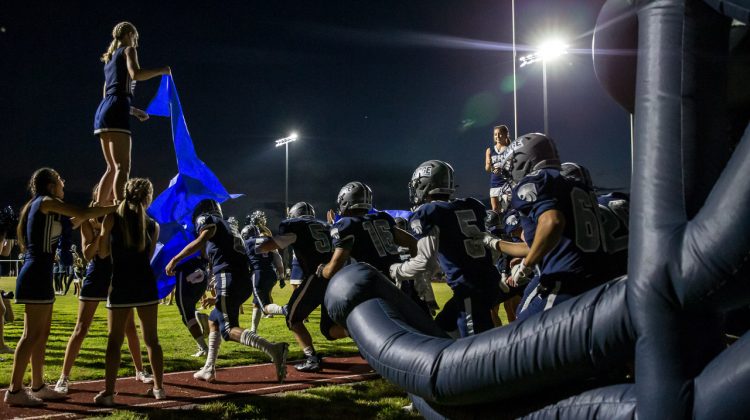 Week three of the high school football season has come and gone, fans across the state were spoiled by the amount of close, entertaining matchups that took place.

Awe-inspiring comeback wins and anxiously narrow margins of victory were the norm on this Friday night, and

No discussion of week three’s games would be complete without mentioning the highly anticipated, nationally televised bout between Hamilton and Las Vegas’ Bishop Gorman. After a tight first quarter that ended in a 7-7 deadlock, the Gaels rattled off 17 straight points and led 24-7 with less than two minutes to play in regulation.

Hamilton seemed dead and buried, but after converting on a field goal with 1:05 remaining in the fourth quarter, the Huskies found another gear. They recovered the ensuing onside kick, quickly marched down the field and scored a touchdown with 29 seconds left to pull within seven points. Nonetheless, their impressive scoring drive seemed to be too little, too late.

Then, Hamilton recovered another onside kick. Senior quarterback Nicco Marchiol once again methodically led the Huskies down the field and into the end zone, connecting with junior running back Nick Switzer on a long touchdown pass with eight seconds left in the game and cutting Bishop Gorman’s lead to a single point. Head coach Michael Zdebski opted to go for two, and Marchiol ran it in himself to give Hamilton its first lead of the game, which it would not relinquish.

FINAL: Hamilton scores 15 points in under a minute to knock off Bishop Gorman, 25-24.

Hamilton not only completed a comeback for the ages against a well-reputed out of state opponent, but did so in front of a national audience, and the Huskies’ victory could prove hugely significant not only for Hamilton’s football program, but for the reputation of Arizona high school football in general.

If not for the outright spectacle that was Hamilton-Bishop Gorman, the cross-town battle between Peoria sides Liberty and Sunrise Mountain would easily have been the game of the night. The contest ended up needing extra time to determine the victor, but at first it seemed like Sunrise Mountain might be in for a runaway win over their cross-town opponents.

The Mustangs led 13-0 at the half, but Liberty regrouped and managed to take a 14-13 lead midway through the fourth quarter before Sunrise Mountain scored on a fumble return to go back ahead by seven. Not to be outdone, Liberty fought back and tied the game at 21 with 2:15 left to force overtime.

Sunrise Mountain junior wide receiver Micah Johnson and Liberty junior running back Zach Wallace traded touchdowns in each of the first two overtime periods, but the Mustangs had to settle for a field goal in the third. With a chance to send his team to 3-0, Wallace answered the bell, putting an end to the game with an eight-yard touchdown run.

Zach Wallace you’re the big man on campus his run wins the ball game in triple overtime for the Lions!!
41-38 final.

What is it with West Valley teams and high-scoring comeback wins? While Liberty and Sunrise Mountain were scoring points back and forth in Peoria, Centennial and Mountain Ridge were treating fans in Glendale to a shootout of their own. The Coyotes jumped out to an early advantage and held a 26-7 lead early in the second quarter.

It’s another PICK 6 for the Coyotes D as Drew Lopez picks off Finch and takes it to the house from about 55 yards. Gardner PAT good.@Cehsfootball 26@MtRidgeFootball 7
7:58 – 2nd Quarter@AzNewsmedia #WestValleyPreps#AzPreps365

Facing a potential blowout loss on home turf, Mountain Ridge awoke from their slumber. After throwing a pick-six on their previous drive, the Mountain Lions countered with an interception of their own and quickly turned it into points, trimming Centennial’s lead to 26-14 at halftime.

The Coyotes rebounded at the start of the third quarter, adding a touchdown and a field goal to go up by 21 points, their largest lead of the night. Just when it seemed as though Mountain Ridge’s rally would fall short, the Mountain Lions sprang to life once again, answering with two touchdown passes before the end of the quarter to pull back within eight points.

In the fourth quarter, Mountain Ridge continued to surge. Senior quarterback Ryan Finch hit fellow senior Dane Berseth for a 37-yard strike with 5:22 left, then scored on a 19-yard run on the next drive to put the Mountain Lions ahead by a score of 39-35. Centennial failed to produce any points on the ensuing drive and Mountain Ridge ran the clock out to solidify their improbable comeback win.