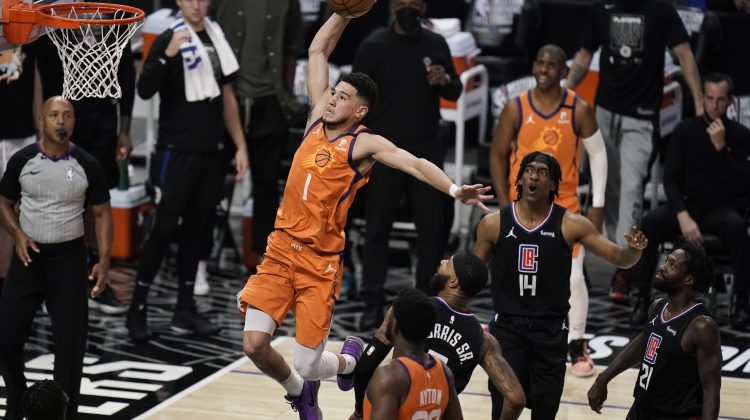 The path to an NBA Championship is going to run through Phoenix.

After disposing of the chippy Clippers 130-103 on Wednesday night, to win the Western Conference Finals 4-2,  the Suns have homecourt advantage for either the Milwaukee Bucks or Atlanta Hawks. I would think Phoenix will be favored to win their first NBA Title because of a complete team and the perfect coach for this group. The performance by Chris Paul in Game Six will go down as one of the greatest in the history of the franchise(41 points).” the most success I’ve had as a coach is with Chris”, head coach Monty Williams said on ESPN after the celebration.

Then there is 24-year old Devin Booker, “He’s not afraid of the moment, that’s what I love most about him”, Williams said.

I feel best tonight for the head coach, who lost his wife in a car accident in 2016. Monty Williams deserves any and all good things. He’s one of the classiest men I’ve seen in the coaching profession.

I do feel good for Robert Sarver. I’ve been super critical of his ownership reign because for ten long, hard years we had to watch a bad product on and off the court. We’ve barely heard a peep out of him this season. When Sarver presented James Jones with the NBA Executive of the Year award at center court earlier in the playoffs, he was given a nice round of applause. Phoenix fans can forgive the losing years when a Finals team is finally put together.

I’m pleased for Al McCoy, Julie Fie, Bob Adloch, Alvan Adams, Tom Leander, Tom Chambers, Eddie Johnson, and a few others who have been with this franchise for so many years. They remained professional throughout the ten-year drought. They kept their heads down and grinded through the dark decade.

So now, it’s eight days to rest and reflect and then go after that elusive first Title. It makes 110-degree days in July more than bearable…