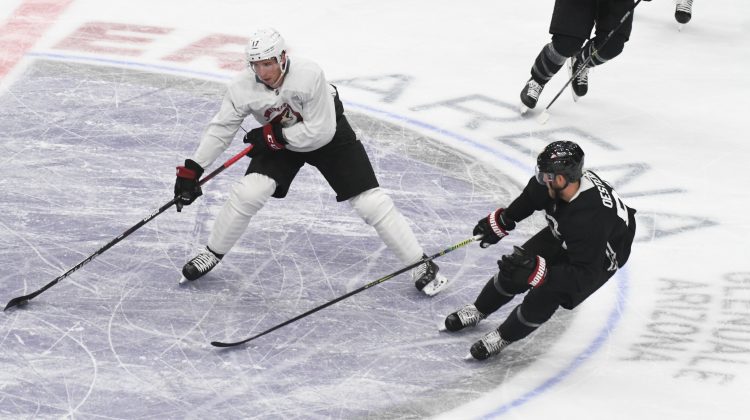 Welcome to the inaugural edition of the “Neutral Zone Notebook”, where Sports360AZ’s Andrew Bell explores and dives into local hockey storylines in Arizona.

With the NHL season underway, and so many other great things going on in the hockey world, here’s a few notes, stories, and things to ponder with hockey in State 48.

Not much should be made of how Arizona State hockey finishes this season, regardless of what their win-loss record is at the end of the year. Making a stretch run would just be a bonus or icing on the cake for any Sun Devil hockey fans.

Playing an all-road gauntlet and creating a mobile bubble with multiple freshmen in the lineup is a challenge in itself. The fact that the program continues to compete on a nightly basis is a credit to the coaching staff and where the program is heading.

In a year where several college hockey programs have opted out or did not compete, the Sun Devils have found a way to make things happen and play games in the most unique ways possible as an independent program.

In the first half of their all Big Ten schedule, the team stayed on the road for 36 DAYS, taking long bus trips in between Midwest cities and remaining couped up in hotel rooms for long hours. Remarkably, there were ZERO positive COVID-19 tests. Coaches, players, equipment managers, medical staff, and everyone involved with this challenge should be applauded.

Although, the Sun Devils did receive their first positive test this morning, and this weekend’s Friday game against Wisconsin has been moved to Sunday.

The program is making two 23-day, eight-game road trips in the second half of the season. ASU has played 11 games decided by two goals or less.

This season has been a measuring stick for the program, and so far it has passed the test. They haven’t just been blown out against legitimate opponents. They’ve held their own.

“We’re way better than our record. I don’t have any doubt about it. I think the record is at least flipped if we have half of our games at this point at home,” said head coach Greg Powers. “…But we knew what we were getting into. We can’t let that be an excuse per se, but it’s also very important that we continue to hold what we are going through in perspective. That’s part of my job is to keep everything in perspective with these kids so they continue to play hard and focus on what’s more important, and that’s the continued build of our program and our culture.”

The commitment to play a season in the first place also shows how much Ray Anderson and the athletic department are committed to making college hockey work in Arizona.

Not only have they funded the road trip during a global pandemic, they have officially begun the process of building the program’s new on-campus arena.

When that arena is completed in December 2022, many doors open. ASU’s current home at Oceanside Arena is not ideal in any way for Division I hockey players.

Powers has made the comparison before in year’s past, but imagine Bobby Hurley trying to recruit Josh Christopher and Marcus Bagley if ASU played at Central High School’s basketball gym. There are many logistical challenges at Oceanside.

It is a community ice sheet that is used by many different youth leagues and teams. Although the Sun Devils make due with what they have and make the best out of a less than ideal venue, the new arena is a whole different world. It will bring in more ticket revenue, more recruits, and is the last piece to the puzzle in ASU joining a conference.

Needless to say, players committing to college programs want the opportunity to play in the NHL. Playing at Oceanside limits that ability due to a lack of ice time at a community rink. Having their own arena allows players to get on the ice whenever they want.

Not only that, the second community sheet at the new arena allows club programs at ASU to flourish. After all, club hockey matters at Arizona State. There’s just a little bit of history there.

The second ice sheet also opens the door for many hockey tournaments at various levels to come west. The Frozen Four is already coming to Vegas in 2026, why not expand even further?

Two of the off-ice moves that the Arizona Coyotes made this week just make sense. When you think of hockey in Arizona, a few names come to mind. Two of those are Shane Doan and Lyndsey Fry. Both have done so much for the local hockey community both on and off the ice.

Thus, it only seems right that Doan is back with the franchise after being named Chief Hockey Development Officer earlier this week, while Fry was assigned to take over radio analyst duties on Fox Sports 910 alongside longtime play-by-play man Bob Heethuis. Fry is just the fourth woman to hold that radio position in the league.

I think when people argue about “Gender Politics” when you get a broadcasting job in men’s professional sports, that means you’ve made it. Excited to make a difference and continue to bring diversity to the @ArizonaCoyotes and @NHL. Can’t wait to be on your radios this year! ?

When the Coyotes needed a GM this summer, there were rumblings about Doan coming back to the organization in some capacity.

Now he’s back with the franchise he loves, and it only makes sense. His knowledge of the organization and his efforts in giving back seem like a win-win. Plus his experience in the NHL league office only adds to his resume and what he can bring to the table.

“For me, why wouldn’t you want to be apart of something like that? I love the Coyotes, I love the community, and I love the network of people that have made it what it is,” Doan said of his new role earlier this week. “…When Xavier (Gutierrez) talked to me about it, I was really excited and I look forward to being able to help out.”