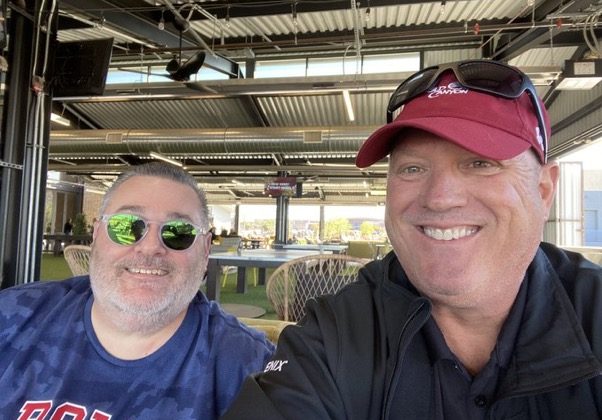 COVID-19 took the life of my friend Andy Luberda on Tuesday.

I didn’t know Andy was sick until late last week. We had gotten together earlier this month to talk about his next steps in life. Andy was about to move out of state and start a new chapter with his wife.

He was both nervous and excited about the move. He was going to leave Arizona right before Christmas. We sat outside at Rock Point Church coffee shop for almost two hours. He was in a really good place for the big events that were coming up in his life.

Andy did more than most in our profession when it came to covering high school sports. Andy didn’t need the pros or college games to take up his time. Instead, he saw the need to pay attention to those in the far southeast part of the Valley.

He opened up a website, CountyLinePreps, and developed a following. A friend relayed a story by a softball dad at Poston Butte high school.

“It was a big deal for my daughters and our team to see Andy in the stands,” he said. “He was going to write something about us and it made the team feel special. He was a bright light in youth sports.”

I remember having lunch with Andy several years back when he spoke about the idea of County Line. For him, going to schools like San Tan Foothills, Florence, Benjamin Franklin, ALA Queen Creek, would be just as important as a Friday night Queen Creek football game. I encouraged him to chase his dream.

Initially, he struggled to get sponsorship, but he persevered. He was persistent to collect the check that inevitably would be late. He stressed over his content. But he CARED. He probably cared too much at times but that happens in the content world.

He wasn’t concerned with the “click”, he just wanted the “click” to be something that wasn’t cotton candy. I appreciated his work ethic but stressed to him that life-balance needed to be a consideration. You can’t be at every game, no matter how badly you want to cover every player. Sometimes you have to put the phone down and be present with others. It’s not easy.

Andy came to me once with the story of Casa Grande football coach Jake Barro and the Barro family with their well-known pizza and restaurants.

I suggested to Andy to tell the Barro story at one of their locations and we’d put it on the Football AZ show on Fox Sports Arizona. Andy put it together with some help and was super proud of the story. He had this little chuckle and smile about being on TV.

Eric Sorenson shot some stories with Andy for County Line Preps. Eric was the first to text me with the news of Andy’s passing this morning. We both felt that Andy was just a few days away from some exciting “next steps” on his journey.

Another day, another farewell. Dinner tonight with @EricSports360AZ, who has taught me and helped me both personally & professionally throughout the past several years. I am forever grateful for your friendship, E. Oregano’s on me during my returns to AZ. #ExtraCrispy

In an industry rife with ego and pride, Andy had none of that about him. He truly was about the kids, not a “look at me” guy. What you saw, is what you got. I will miss him and his spirit.