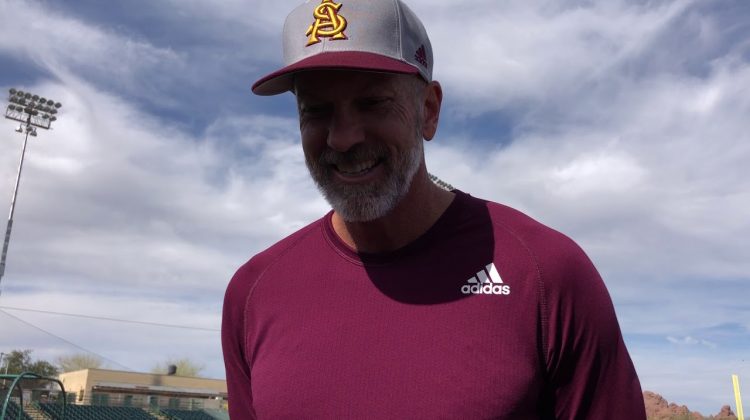 The Arizona State baseball coaching staff spoke with the media Monday morning, discussing how things have been going during Fall Ball, along with the impact COVID-19 has had on recruiting and their rosters.

Head coach Tracy Smith came to the podium first and mentioned how the Sun Devils are approaching things this season as a team, and creating a new identity.

“I think offensively, defensively where we don’t have the (Spencer)Torkelsons of the world that are going to hit 25 (home runs), we’re going to be a more balanced team top to bottom,” Smith said. “That stuff, we aren’t going to truly know until the spring time, but we like what we’ve seen. You’re never going to replace those types of guys, but I don’t feel you have to replace. You can create a different identity with a different skill set. It’s going to be a different style in how we approach our offense.”

The NCAA gave spring-sport student-athletes an extra season of eligibility due to COVID-19 this offseason. Baseball was also the only spring sport to have its roster limit increased.

“I don’t think it has a huge impact with our roster,” Smith said on the new rules. “I think some other rosters around the country, probably. The NCAA says you have an unlimited roster this year. I don’t see it being an unlimited roster next year. I see it being a 35-man again, so I think what’s going to be really interesting is when you see the roster movement at the end of the 2021 season.”

Among other topics, Smith also spoke about what his expectations are from the pitching staff in the upcoming season.

“The simple answer is I expect our pitching staff to give us a chance to win every single night,” he said. “Knowing that’s not going to happen all the time, but I think given the quality of arms that we have, given the depth, that we’re going to be in a pretty good spot to do that.”

Pitching coach Jason Kelly, who joined the program last year after spending time at the University of Washington, has noted the improvements that he’s seen from returning arms.

“I think if you go down the list from top to down, everyone has gotten better and that’s important because it’s a lot of the same pieces to the puzzle, but there’s a little more experience and trust,” Kelly said. “They have a feel for the system and they know what they need to do to get better. As I go down the list, almost every guy has added something. That’s a credit to them wanting to work.”

Kelly feels strong about the pitchers that will hit the mound for the Sun Devils in the spring. In college baseball, pitching depth is always important, and that should be a strength for the ASU pitching staff.

“It’s a good feeling going to bed at night knowing you have four guys minimum with starting experience in your group and guys that I think were just coming into themselves last year as it got canceled,” Kelly said. “I made sure that the group understood that the slate was going to be clear and we were going to have to come in and earn jobs. I think they’ve taken that to heart. We still haven’t determined roles yet, so they’re still competing.”

As for players who have impressed, Smith gave his take on which Sun Devil has been the biggest surprise right off the bat so far this year.

“The guy that has really made a jump in style of play: Sean McLain,” Smith said. “Sean McLain has come back stronger and more physical. We’ve been able to bounce him around. Where I’ve seen the most jumps, not just through average but also power, is at the plate and that’s been fun to see.”

After Smith was done speaking, the next coach to speak with media was associated head coach Ben Greenspan. One of ASU’s top recruiters in helping to find talent, he highlighted how the recruitng baseball landscape has changed with the pandemic.

“It’s been interesting,” Greenspan said. “It’s thrown the whole thing upside down. Originally, we slowed it down and now we’ve picked it back up. I think now more than ever, the relationships that you have, that you’ve developed with high school, junior college, travel coaches, scouts, everybody are as crucial as they’ve been. You have to lean on some people you trust.”

This year’s recruiting class was ranked No. 10 in the nation according to Collegiate Baseball News. With a first-year platoon of newcomers trying to step in for players recently drafted, Greenspan went into how the group has meshed in since they arrived.

“I really like the group,” Greenspan said. “It’s going to be one of those groups that over time you’re going to look back and say that’s a really good class. I could see a couple freshman this year getting limited reps and then blossoming into really good players in the future.”

When it comes to recruiting, the staff asks recruits what they are making their decision off of. The success of previous players in the Sun Devil program is helping the development of future players, according to Greenspan.

“Every player we recruit says I want to go somewhere where I can develop. The flip side for us is how do you show development,” Greenspan said. “Obviously when you have someone like (Torkelson) who goes from undrafted to the first overall pick, I don’t know how you show development better than that. As you look at the group, the draft success it’s a great thing for the program in a lot of ways.”

As for the bats and offense, hitting coach Michael Earley expressed who have been the standouts so far at the plate, looking to bolster offensive production.

“Drew Swift keeps getting better and better each day,” Early said. “He’s stronger, smarter and has a lot of reps under his belt. He’s the obvious one for me. Kai Murphy impresses me every single day. That kid is a stud. He reminds me of Hunter Jump a lot. With those two guys, I think they’re going to cause a lot of havoc.”

There are some holes to fill with the departure of five Sun Devils taken in the 2020 MLB draft. However, Earley emphasized that they aren’t trying to replace those guys, but rather try something new.

“We met early on and I was honest with the guys and I said, ‘Look I don’t think there’s anyone on this team going to hit 20 home runs.’ That’s just not who we are,” Earley said. “We’ve been known to hit home runs, and we’ve just pivoted and guys have really bought in. Our motto is we’re going to throw jabs and then those knockout punches when they come.”