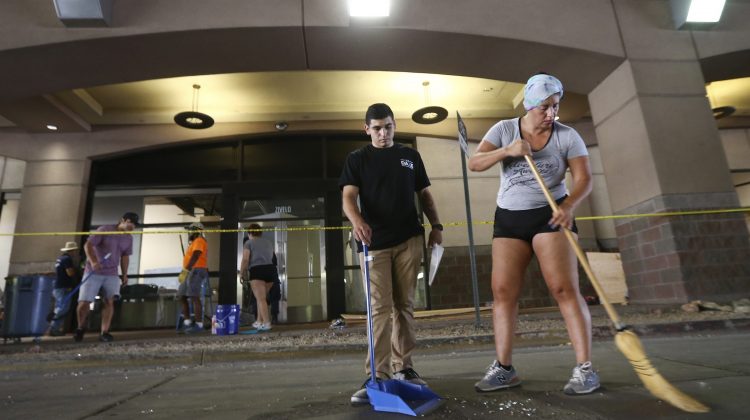 Through the years I’ve seen and heard from high school athletes about how substantial of an impact their prep coaches made on them. With this past week’s protesting, rioting and looting in the wake of George Floyd’s death, I asked several coaches for their thoughts and what they might say to their players.

“Very rarely are problems solved during the heat of the conflict. I hope and pray that people are safe as possible and I will continue to explore my role as a black leader and how I can positively impact our society.”

“Growing up in the 80’s in San Jose, California – I grew up in the projects. I loved living there because we were with so many different nationalities, races and religions. My parents made sure that we did our best to treat people how we would like to be treated. Our birthday parties were like block parties because my father didn’t want anyone to be left out. Ironically, it was everyone’s birthday party but my brother and I loved that.
“When we were 14, my mother was going through some financial issues and we went to live with my older brother. He was 21, starting a family and he just made sure we went to school and stayed involved in sports. We moved to Redding, California. It was at the top of California, almost to Oregon. It was much different from where we grew up. Slow, country and no color. Unfortunately, this is the first time I experienced racism. There were two incidents – both happened while playing sports.
“The first one was when I was playing football and I got tackled. Once i was on the ground I heard some of the players from the other team say, ‘Yeah we finally got that ni***r.’ I jumped up and started crying. I ran off to the sideline and my coach asked me while I was crying. I told him, ‘They called me a ni***r coach.’ My coach stopped the game, walked onto the field and yelled at the other coach, ‘If your players ever say that to my kids again, I will quit this game and embarrass this program! How could you allow your kids to say those stupid things?!’ Then he put me back in the game and said, ‘You better score.’ My teammates said, ‘Marcus, they won’t touch you.” I scored.
“The next time was playing basketball with a team from Red Bluff, California. It was a hub for [Ku Klux] Klan rallies. We get there and there were police escorting us into the game. I was asking my coach if we did something wrong. I didn’t understand why the police were there. Once we entered the gym, I knew why. The only people of color in that gym were on my team – two of us. I remember shooting free throws and them chanting, ‘Ni***r Ni***r, Ni***r.” It was like everything I read in the history books. But I felt safe as long as I was on the court because I was in my zone.
“I would let the players know that those experiences help mold me to the man I am today. I learned from those lessons. I learned that we have good people, as well as ignorant people, in the world. When I was discriminated against, there were people there to help me so I didn’t put all white people in the same category. I didn’t allow myself to have that “victim mentality.” It also got me prepared for the world that I was growing up in. Right, wrong, or indifferent – it was the reality. I can’t stand the phrase, “I don’t see color.” This is ignorant to me for the simple fact that our colors make up how beautiful this world is. Think of a rainbow without its colors. It wouldn’t be the same. This is why we are excited to be at DE. The school is literally like the world we live in.
“I hope this opens up the eyes of sports, in general. 11 black head coaches out of 244 schools in the state of Arizona. We literally had to get hired by a black athletic director to get an opportunity. That needs to be addressed. Coaches of color have to take bad jobs and make them [successful] to show that we are competent. It’s unfair but like I said earlier, it’s the reality and those past experiences [which] helped me to navigate through it.
“I would end with what I say to the players before we leave the locker room: “Love each other, protect each other and let the chips fall where they may.”

“[I] was excited that our Gilbert Public Schools leadership put a plan in place for our coaches to get back to work with our athletes, but now [I’m] more excited to help our athletes understand the social injustices they are experiencing with today and ways to deal with them in a positive way.”

“I want my players to know that I love and support them. Like I try and instill in all my players, character is not a bid deal, its the only deal! Character has no color, no labels, just the actions of the man. This circumstance has been angering and should be eye-opening for change. At the same time, there are still great people that care and are trustworthy. I hope that every one of my players learns that treating others as you want to be treated should be something that we all display on a daily basis. I want every single one of my young men, to turn out to be great men so that they can be positive influences to guide positive change.”

“Race isn’t biological. Race does not run in our DNA. Race is how somebody somewhere hundreds of years ago decided to categorize the human race. Human beings created racism…anything you create you can destroy. We can destroy racism, but it’s going to take a collective effort by the masses…or it won’t work. It takes want to.. as parents we tell our kids…’You can do whatever or be whatever you want just put your mind to it.’ As a society isn’t time we wake up and smell what we’re shoveling?”