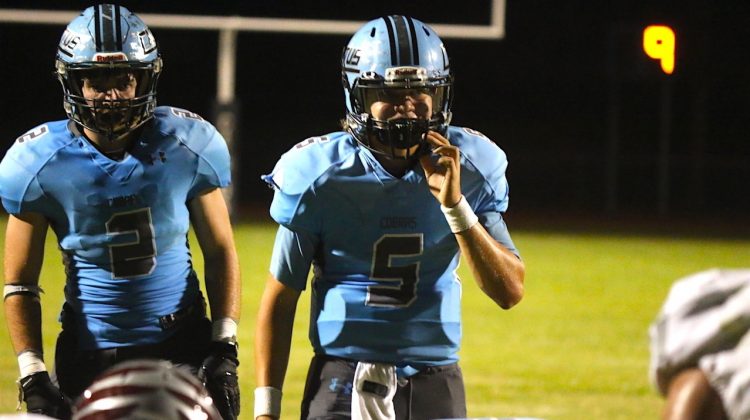 As we inch closer to the beginning of the state tournaments, the hunts for playoff spots are heating up. One of the best teams in the state comes west to battle a growing program, a great 1A matchup ensues, and a potential battle for the number one overall seed in the 4A Tournament could be decided on Friday night.

Last year, Desert Edge and Cactus were the third and fourth-ranked teams in the 4A Conference State Tournament, only behind Saguaro and Salpointe Catholic. If both Saguaro and Salpointe Catholic are moved into the Open Division Playoff, Cactus and Desert Edge could be next in line to sit atop the Conference. While West Valley Region Championship title could hang in the balance, it could be so much more. The number one overall seed in the 4A Tournament could be decided in this meeting on Friday Night.

Both teams have met and fell to Salpointe Catholic and DEHS has also lost to juggernaut, Saguaro. That experience battling two of the best teams in the state could give the Scorpions the upper hand in the experience category to defeat Cactus. But Cactus has been rolling. The offense has found a rhythm in their past two games outscoring Youngker and Deer Valley 106-7. With Desert Edge coming off a 63-14 loss to Saguaro, either Cactus needs to kick the Scorpions while their down, or Desert Edge will rise up and come off a loss with energy and a desire to tear a victory from the Cobras.

Big win last night for @DEdgeFootball it was an awesome TEAM win! It started up front with these guys, 600 yards of total offense with well over 200 on the ground and 0 QB sacks! Great job tonight bigs, couldn’t be prouder of the performance! pic.twitter.com/XXg46eZ4iA

The Cactus offense has been almost as balanced as ever, averaging 175 yards in the air and just over 190 yards pounding the ground. Step one for the Scorpion defense to contain Cactus is the defensive line to confine senior quarterback, Connor Cordts and running back Anthony Flores. That duo for Cactus has combined for over 900 rushing yards collecting 15 TDs. Desert Edge’s sophomore defensive end, Cris Contreras leads the team in sacks and is second in tackles for loss. In the secondary, five juniors lead the defense in tackles, led by Myles Hobbs.

The Cobras contained Ironwood quarterback Will Haskell in a Week Two victory, but stopping DEHS sophomore QB, Adryan Lara, will be a different challenge. The gunslinging youngster has already thrown for over 2,000 yards in 2019 posting 21 touchdowns and only eight interceptions. It will be up to guys like senior, Nicc Quinones, who has accumulated team-leading three INTs and 56 total tackles this season to step up and force Desert Edge to run.

Depending on how the defenses react to what the offense gives them, don’t be surprised to see a high scoring game, or a simpler 33-22 final like these two witnessed in last year’s meeting.

Only a Surprise to Those on the Outside

Don’t call it an upset, it’s what Mountain Ridge has been cooking up since day one. For the first time since 2010, the Mountain Lions have at least five victories to their credit. The last time MRHS racked up five more wins was also their last tournament appearance. After taking down powerhouse, Liberty, last week, they’re on track to get back to a state tournament with a current 5-2 record.

Division I college baseball commits, and twins, QB Keegan and receiver Kyler Stancato, have connected nine times this year for touchdowns and nearly 600 yards. Jay’von Thompson has also been a great asset to this team, being the key rusher for the team being another rushing threat beside Keegan Stancato.

If you haven’t heard of the Stancato twins, time to listen up. @keegan_stancato & @kstancato2 have shined in 2019 for @MtRidgeFootball. The DI baseball commits have done their part to #RestoreTheRidge & 6A better watch out because the Ridge is coming. #AZHSFB #FridayNight360AZ pic.twitter.com/ToWGtDM7zD

In their double-overtime thriller against Liberty, Tanor Loosle recovered a fumble that would lead to Ridge’s walk-off win. They now welcome in the AIA’s seventh-best team in the state of Arizona, Michigan bound QB, J.D. Johnson, and the Pinnacle Pioneers.

Johnson has thrown for a mild 1,289 yards. While it doesn’t seem like a great number of yards, Johnson has been accountable for 96 total points in 2019. Defenders such as Tommy Ellis and Deryk Leverage will have to play the game of their lives to take down the Pioneers, but don’t seem so surprised if they put up one heck of a fight.

Eight-Man Action in the West Valley

For now, the Anthem Prep Eagles are en route to a 1A State Tournament appearance. With a 3-3 record to their credit, the Eagles move into their final two games and their final home outing of the eight-man 2019 season on Friday night.

Before they battle one of the best teams in 1A, the Salome Frogs, they battle a unique opponent, the Phoenix Day School for the Deaf football team. PDSD currently sits at 2-3 entering their final two games averaging over 50 points per game. While PDSD loves the ground attack with senior, Brian Lynch averaging 240 yards per game, sophomore quarterback, Isaac Nubes has also shined with 434 passing yards and nine touchdowns.

The PDSD offense has been electric for most of the season and the defense of Anthem Prep will have to step up. In their last game against Bagdad, the Eagles racked up 225 pass yards, including an 87-yard TD.

Both teams are on the verge of being one of the 12 teams to make the 1A State Tournament and this could be a crucial game in tipping the scales in favor of themselves. The game will be at North Phoenix Preparatory with a 7:00 pm kickoff time.

DE with an early lead in this one #FridayNight360AZ https://t.co/T6dHFVhG2j