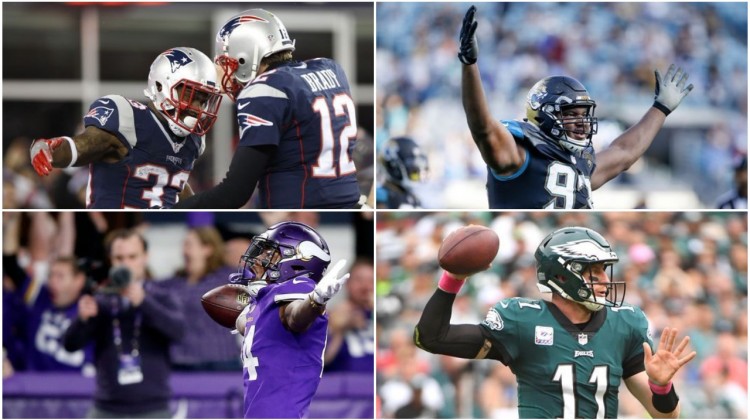 It wasn’t that long ago that the Arizona Cardinals were playing on this very NFL weekend.

It may seem like a while ago because a lot has happened, and a lot of adversity has fallen upon the Bird Gang.

Three of these four teams seemed to have plenty of issues going into this year too. Then there’s, ya know, the Patriots.

Jacksonville is a surprise team. Minnesota and Philadelphia are too given the injuries they’ve had to overcome. Could these teams playing in championship weekend provide blueprints for Arizona to take as they try to rebuild for the future? It’s fair to say that just about every team is trying to mimic “the Patriots way” but there aren’t many Tom Bradys walking around (At last count, there is one). So we’ll take a closer look at the other three championship participants.

The good news for the Cardinals? All three of these defenses were top-five in the league in yards allowed. The Cardinals? Sixth. With young playmakers on that side of the ball in Budda Baker and Markus Golden paired with premier vets Patrick Peterson, Tyrann Mathieu and Chandler Jones, they have the building blocks to have a sustained top defense over the next few years.

Now, to how they could approach the rest of the team…

The Vikings have tried to find their quarterback of the future. From drafting Teddy Bridgewater to trading for Sam Bradford and signing Case Keenum, they’ve made deals to set themselves up to have depth at the quarterback position, and man, did they need it. Do the Cardinals target a stable veteran a la Keenum like they did when they pursued Carson Palmer?

Like the Eagles, the Vikings have depth at the skill positions to keep them productive and make it easy on the quarterback, no matter who it is. Adam Thielen, Stefon Diggs, Kyle Rudolph are constantly on the radar of Keenum and can do a lot with a little bit of space. The fact the Vikings didn’t skip too much of a beat having Adrian Peterson walk and then rookie lightning bolt Dalvin Cook going down to injury speaks to the depth in the backfield. It also helps that the Vikings just don’t give up points. The Cardinal defense has those similar pieces in the secondary and trenches that can have them be on pace with the Vikings.

Could the Cardinals go the route where they don’t break the bank or use top picks to address the quarterback and beef up the roster elsewhere? Where the state of the NFC West is going, it is going to be wise trying to add to a defense as much as one can when playing Russell Wilson, Jared Goff and Jimmy Garropolo twice each year. They already have a premier corner and a ballhawk safety on the defensive side, not to mention a running back that, when healthy, can take over the offense. Where the Jaguars thrived was in the offensive line as well, giving up just 24 sacks all year. The Cardinals have talent on the line, but are aging and faced plenty of injury issues last year. To play that style, you’ll need guys up front that can beat up a defense and have the endurance to have an offense that eats a lot of game clock.

If the Cardinals fall in love with a top quarterback this draft, and there are about four to six that could go early, do they go all in to get that guy?

The Eagles did that with Carson Wentz, sending over five top-four round picks over the span of three years but, as of now, it seems like it’s worked out. The question is…is it worth it to pull the trigger and send future top picks for a Rosen, Darnold, Mayfield or Mayfield when the team won’t have a ton of salary cap space to make deals elsewhere? Do they hope to have Josh Allen, Lamar Jackson or Mason Rudolph fall to them and risk getting bit if they aren’t available? The irony of this is all those picks they sent over returned zero postseason production because of Wentz’s ACL tear this year, but that hasn’t slowed down the Eagles.

Another area where the Eagles thrived this year was spreading the ball around the field in the passing game. Zach Ertz, Nelson Agholor and Alshon Jeffery all exceeded 700 yards receiving and at least eight touchdowns. The Cardinals could pursue a few pass catchers in the draft or take a look at a Davante Adams or Allen Robinson, who is coming off an ACL injury, to help in the passing game to pair with Fitzgerald should he decide to play in 2017. Last year, the Cardinals used an early pick on Chad Williams, and he has the frame to be an option in the future.

Now, I’m not going to say Ricky Seals-Jones is on an Ertz (or Kevin Rudolph) level, but he showed flashes that he could be a big-time contributor and a matchup problem in his rookie season that could develop even more over the years.

I know, I know. I said I wasn’t going to use New England as a blueprint for success because the franchise has the greatest mastermind in the sport in Belichick and the most consistent quarterback in Tom Brady. But the Cardinals have had success doing a Patriots trick in finding players in the twilight of their careers and just making it, well, work. Karlos Dansby (twice), LaMarr Woodley, Antonio Cromartie, Larry Foote, Dwight Freeney. The list goes on and on for the one-year deals Keim was able to ink to find instant impacts. Given the state of the roster and the cap space, Keim will be sure to pull a few of those deals this offseason as well.

There’s no one way to success in the NFL. And the route the Cardinals go will largely be determined by who ends up being the head coach. From there, the quarterback decision, Larry Fitzgerald’s future and draft strategies will be the next dominoes to fall. The franchise have some examples to look to, and coaches on those staffs that could help further emulate those strategies.