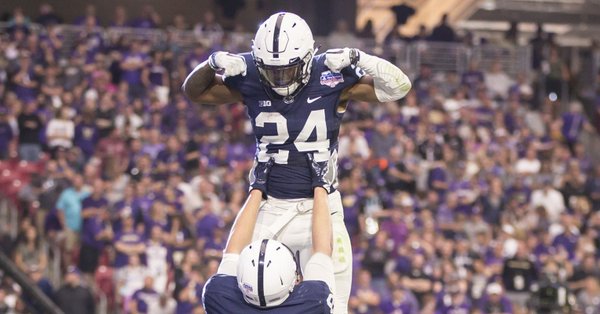 The Penn State Nittany Lions jumped out to an early 14-0 lead and never trailed, defeating the Washington Huskies 35-28 in an entertaining PlayStation Fiesta Bowl before an announced crowd of 61,842 at University of Phoenix Stadium. With the win, the Nittany Lions improve to 11-2 and 7-0 all-time in the Fiesta Bowl. The Huskies finish their season 10-3.

Here are five things we learned Saturday afternoon in Glendale.

1. Lion Roar…It became apparent early PSU would have no problem moving the ball against the Huskies’ usually stingy defense. The Nittany Lions tallied 367 first-half yards and finished with a Fiesta Bowl-record 545. Junior quarterback Trace McSorley was phenomenal completing 32-41 attempts for 342 yards and two touchdowns. He also rushed for 60 yards on 12 carries.

2. Saquon Gone…Widely considered the best running back in college football, Penn State junior Saquon Barkley didn’t disappoint finishing with 137 yards on 18 carries. He scored a pair of first half touchdowns, including a 92-yard dash down the PSU sideline, tying the longest run in school history and setting a benchmark for the longest dash in Fiesta Bowl history. “I think he’s as good as advertised,” Washington head coach Chris Petersen said. “He’s an excellent player.” Barkley also caught a game-high seven passes for 38 yards.

3. Murphy’s Law…It seemed only fitting former Saguaro Sabercat star Byron Murphy would make an impact in his Arizona homecoming. The Washington redshirt freshman defensive back thwarted a first-quarter Penn State scoring driving intercepting a McSorley pass in the back of the end zone. He also added a sack just before halftime.

4. Slow Start…The Huskies have no one to blame but themselves. UW struggled on both sides of the ball, falling behind 28-7 before climbing back in the game in the second half. Penn State converted a jaw-dropping 13 of 17 third-down conversions Saturday afternoon. “We were fantastic on third-down on offense today,” PSU head coach James Franklin said. It was Petersen’s first Fiesta Bowl setback as head coach. He led Boise State to a pair of wins over Oklahoma (2007) and TCU (2009).

5. Pathetic Pac-12…With UW’s loss, the “Conference of Champions” fell to 1-8 in the 2017 bowl season. Only Utah managed a victory, beating West Virginia 30-14 in the Heart of Dallas bowl the day after Christmas.