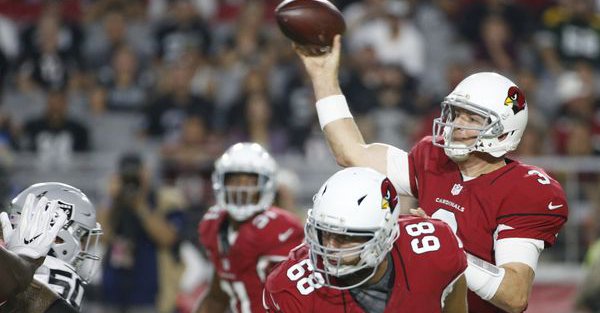 An injury to the left arms of David Johnson and Carson Palmer has not only torpedoed the Cardinals’ season, but has raised the question of “Who will be the long-term solution under center?”

Johnson, Palmer, and Larry Fitzgerald seemed like the perfect recipe for the Cardinals to make the playoffs this season. Then Johnson suffered a dislocated wrist in Week 1 and now Palmer is out with a broken arm. Not only are two playmakers are out for the season, but this might be the end of the road for Palmer in terms of being a starting quarterback.

Johnson dislocating his left wrist is the most impactful loss for the team, so Steve Keim went out and traded a conditional sixth round pick for Adrian Peterson to help fill Johnson’s void and to support Palmer and Fitzgerald. But when Palmer broke his arm last week, the Cardinals playoff chances were further stifled.

Palmer’s injury forces the Cardinals front office to think about who will be the short-term and long-term quarterback right now rather than at the end of the season.

“What I would do if I were them is I would try to convince Carson Palmer to stay one more year. Sign a one-year deal and help tutor the next guy,” Peter King of the Monday Morning Quarterback said. “If I have a young quarterback, I say to this young quarterback, ‘I want you to learn how to do things the right way,’ I want to have somebody there. I’m not saying Drew Stanton isn’t that guy… But I’d like it to come from someone who has played at the peak of his profession and I think it would be worth the money, whatever it would cost to have Carson Palmer in the house… Getting the next quarterback ready for 2019 and beyond.”

The Cardinals play the San Francisco 49ers Sunday, who just added their quarterback of the future by trading for New England back-up Jimmy Garappolo. In 2016, He threw for 690 yards, five touchdowns and zero interceptions in three games while Tom Brady was serving his suspension for “Deflate-gate.”

With Garoppolo as the new signal caller in San Francisco, Jared Goff in LA, and Russell Wilson in Seattle, the Cardinals seem to be the only question mark remaining in the NFC West when it comes to their quarterback of the future.