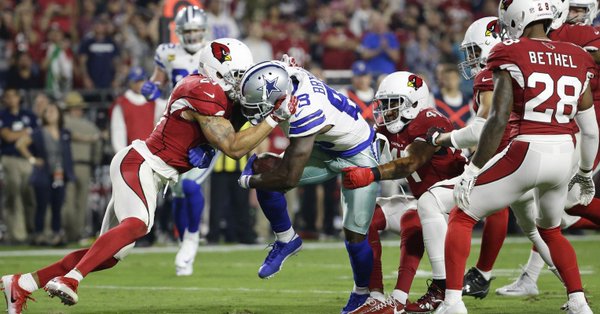 The Arizona Cardinals returned to their nest, the University of Phoenix Stadium, Monday evening opening up the regular season home schedule falling to the Dallas Cowboys 28-17 in front of a sold out crowd of 65,102 in Glendale. The Cards fall to 1-2, while the Cowboys improve to 2-1.

Mixing it Up…Credit Bruce Arians for getting creative with the offensive look early and often against the Cowboys. On the opening possessions the Cards featured one-back, two-back and even a couple empty looks. He also mixed in a number of different receivers including rookie Chad Williams. Andre Ellington was featured in both run and pass game. Carson Palmer started red-hot, completing 11-12 and a touchdown as Arizona drove the length of the field on their first two drives. A second touchdown pass to Jaron Brown was nullified by a Jared Veldheer holding penalty. Veldeer was beaten badly most of the night by the stout Dallas front who registered six sacks.

Bird Droppings…Monday resembled more of an early pre-season for the Cards who struggled with simple football fundamentals. Both Robert Nkemdiche and Markus Golden jumped offsides in the first half. Unforced errors have been a re-occurring problem for the former first-round pick Nkemdiche. Phil Dawson missed a chip-shot 32-yard field goal (his third miss, equalling his entire 2016 total with the 49ers). Starting tight end Jermaine Gresham was beat for a sack, then dropped a potential first-down throw which eventually set up the Cowboys’ second touchdown. “It’s a long season,” linebacker Chandler Jones explained. “It has to be short-lived, win or loss, and unfortunately we lost. But it has to be short-lived.”

Dominant DeMarcus…the Cowboys’ talented defensive end DeMarcus Lawrence was a regular in Arizona’s backfield all game pressuring Palmer and disrupting the Bird Gang’s once in sync first-half offense. Lawrence finished with three sacks, four total tackles and six quarterback pressures. His fourth quarter heat on third-and-one forced a Palmer incompletion near Arizona’s goal line. Dallas took over the ensuing drive at midfield after the punt and re-gained the lead six plays later. They would never trail again in the game.

Larry Legend…no one enjoys and excels on the big stage and under the bright lights more than Larry Fitzgerald and Monday night in Glendale was no different. Fitz was well, fantastic, catching a game-high 13 balls for 149 yards and a touchdown on a beautiful throw from Palmer in the corner of the end zone in the third quarter. “That’s Fitz, that’s Monday night,” Arians said afterwards. “He’s a Monday player. It was a great performance by him.” With an injury-depleted Dallas secondary, Arians began stretching the field using Fitzgerald in the second half. He was targeted almost as many times (15) than all Cowboy receivers combined (18).

Run and Gun…Dak Prescott is proving his rookie season was no fluke. The second-year Cowboy quarterback threw an array of pretty balls on the run, including one for a touchdown which enabled Dallas to fight back from a sluggish first half start. Prescott finished an efficient 13-18 for 183 yards and two touchdowns. He also added a 10-yard scoring run and helped steady the Dallas offense.

The Cardinals will stay home this week and face the 0-3 San Francisco 49ers Sunday at 1:05.