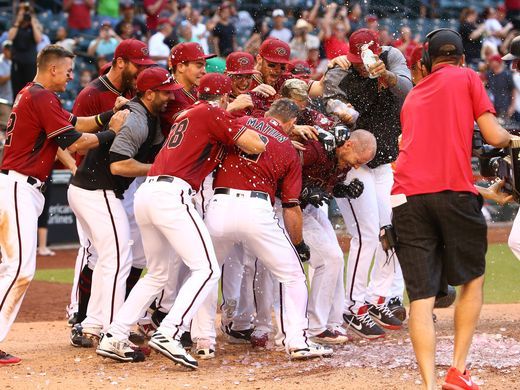 The Arizona Diamondbacks took advantage of a limping New Mets squad, sweeping the Metropolitans and now have a 24-18 record, just two games behind the first-place Colorado Rockies. The Diamondbacks are now 18-8 at home after a Chris Herrmann walk-off home run to earn the Snakes the sweep.

The Diamondbacks sweep was fueled by a strong effort by the middle of the lineup. Paul Goldschmidt, Yasmany(more like Yas-money amirite?) Tomas, Jake Lamb (two games) and Chris Owings (one game) combined for 11/30, four home runs, nine rbis, eight runs and five walks. The middle of the lineup has been the driving force for the Snakes’ 17 runs in three games.

In the case of Lamb, Tristan H. Cockcroft provided this stat:

In the past calendar year, Jake Lamb has 30 home runs and .292 isolated power against right-handers. Only four players have better in both categories: Charlie Blackmon, Jay Bruce, Khris Davis and Freddie Freeman.

Torey Lovullo stresses seven innings, 21 outs, for his starters. In this series, the Diamondback starters failed to reach that mark in all three games, but each starter threw at least six innings each. The bullpen took it from there. The group of Andrew Chafin, J.J. Hoover, Fernando Rodney, Jorge de la Rosa, Wilhemsen, Silvino Bracho and Archie Bradley threw 9.2 innings, 5 hits, 2 earned runs and striking out 13. Those two runs also came in the ninth with Bracho throwing with a 7-0 lead on Tuesday.

The strongest start of the Diamondbacks sweep came from Zack Godley, who threw 6.2 innings, gave up one hit, one run, walked five and struck out seven. Godley has been excellent filling in for Shelby Miller, accounting for 13.2 innings and giving up just two earned runs while striking out 13 in three starts.

The Diamondbacks have a quick road trip to San Diego with Taijuan Walker, Robbie Ray and Zac Godley throwing for the Snakes.