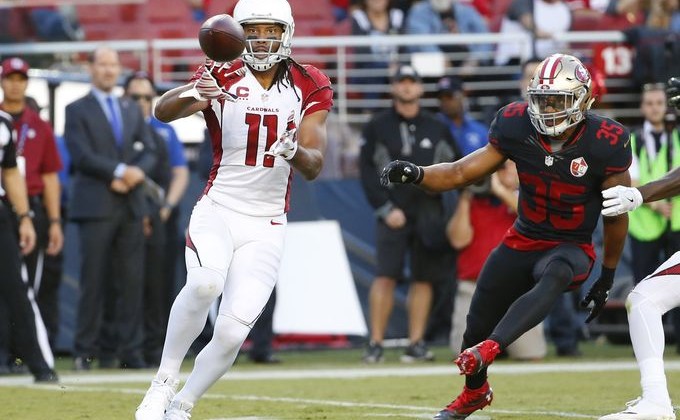 The Arizona Cardinals played their second consecutive NFC West opponent Thursday night defeating the San Francisco 49ers 33-21. With the win the Cardinals improve to 2-3. The ‘Niners fall to 1-4 after a season-opening win over the first-place Los Angeles Rams.

Here are five things we learned in Santa Clara.

1. Mission Accomplished …For most of the first half Bruce Arians’ squad didn’t play like a desperate team but they leaned on David Johnson’s legs and Larry Fitzgerald’s savvy to get a much-needed win for an entire franchise with a bruised ego after a 1-3 start. The Cards are still very much a work in progress but the roster is loaded with talent and most importantly, there’s still plenty of season left. “It’s hard to get wins in this league,” Arians said afterwards. “You better enjoy them when you can…you just have to start putting wins together…we had to win this game.”

2. Turnovers: The San Francisco Treat…The 49ers proved to be gracious hosts to a team looking for some free handouts. Arizona capitalized on three costly miscues, two sandwiched between the end of the second quarter and beginning of the third, scoring 17 points and swinging the momentum after falling behind 7-0. Let’s not kid ourselves, Chip Kelly’s team entered the game 28th in total offense, outside of Carlos Hyde and Jeremy Kerley (who combined for 216 total yards and two touchdowns) there isn’t much for Kelly to work with.

3. Balancing Act…With no Carson Palmer, Arians did what most expected: he rode Johnson over and over and over. “DJ” finished with an 2016 NFL season-high 157 yards on 27 carries and two touchdowns. No team in the league is worse than the ‘Niners in run defense and it showed. The Cardinals had 37 running plays and 28 passing.

4. Markus Is Golden …The 2016 season hasn’t followed the predicted ‘Bird Gang’ script but second-year linebacker Markus Golden continues to build off his impressive rookie year. He registered a sack for the fifth consecutive game (finished with two Thursday). He also had 10 tackles and two quarterback hits. The 2015 second-round pick from Missouri is on his way to Pro Bowl season. He currently leads the NFL in sacks. James Bettcher’s defense had seven in Santa Clara, including a safety by Calais Campbell who had easily his best game of the season (two sacks, interception). “I was very pleased with our defense,” Arians said. “It’s a very hard offense to get ready for…I thought we handled their option game pretty well.”

5. No Burst In The First…In what has turned into an ugly trend the Cards were held scoreless in the first quarter for the sixth consecutive game dating back to last year’s NFC Championship loss to the Panthers. Maybe the most frustrating part Thursday was Arizona started their first two drives at their own 43 and 38 yard-line. Good teams will make Arizona pay for things like this moving forward. The Cards have punted on all 13 of their first quarter possessions and been outscored 27-0.