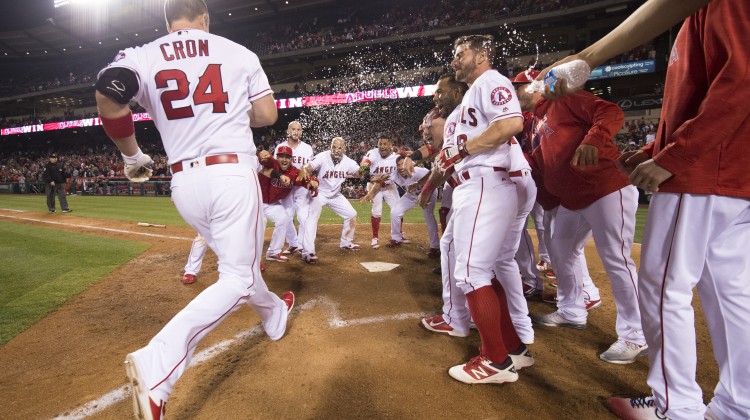 ANAHEIM, CA - MAY 31: C.J. Cron #24 of the Los Angeles Angels of Anaheim is greeted at home plate by his teammates after hitting a walk-off two-run home run to defeat Detroit Tigers 11-9 during the ninth inning of the game at Angel Stadium of Anaheim on May 31, 2016 in Anaheim, California. (Photo by Matt Brown/Angels Baseball LP/Getty Images)

Eight years ago sweet swinging C.J. Cron starred Mountain Pointe High School in Phoenix. Now, Cron holds a spot on the Los Angeles Angels of Anaheim roster. Sports360AZ.com has kept tabs on him through the years and last week we got the chance to catch up with the first baseman and designated hitter .

Cron graduated from MP in 2008 before attending the University of Utah. It was during his time in Arizona that we saw him quickly become one of the many notable rising star athletes coming from the Valley. Three years later he became the 17th overall pick in the first round by the Angels.

The 2016 season has been quite the thrill ride for Cron. At the half way mark his impressive at-bat appearances included three multiple home run games.

Unfortunately, Cron was recently hit by a pitch and fractured his left hand. Placed on the disabled list is a disappointing way to end the streak he was having, but with the extra down time, the former Pride star reminisced about his time in Arizona.

Thank you all for the well wishes! I’ll be back.

“You always look back at your time in high school and remember the friends you made and the coaches that helped you get to where you are today,” he explained to Sports360AZ.com. “Without all the help, none of this would be possible.”

“It [MLB] is everything you dream about as a kid,” says Cron. “And then being able to take part in my 2nd Opening Day was special.”

Taking a moment to think back on the people and places that have helped get Cron to the big leagues, it is clear to see that Arizona has played a major role in Cron’s story.

Cron keeps in touch with his old MP coach, Brandon Buck, who recently left the school.

“It is sad to see him leave the program, but we are all really happy for him in his new endeavors,” he said. “What he built at MP was truly remarkable and he left the program in a successful spot.”

During his senior year in Ahwatukee Cron hit .421 with 35 RBIs. He later became an All-American and Mountain West Conference Player of the Year with the Utes.

Cron’s advice to younger players is to “keep working hard,” if they thrive to one day wear a Major League uniform like he’s had the honor of donning the past couple years.

“Some people are just gifted with talent,” he adds. “Others are not. And you’ve always got to get your work in, and listen to the people who have been there before and who want to help.”

Cron encourages others to continue to learn every day that you step out on the field.

As for people who have been there before him Cron’s father, Chris Cron, was a former MLB player and also manages a minor league team.

“Without my mom and dad I definitely wouldn’t be where I am today”, Cron says. “Growing up and always being around baseball helped me so much to learn the game at such a young age. My parents are both always there for me. I call either of them at any time to seek out advice, whether on or off the field.”

It’s pretty clear baseball and family go hand in hand for the Cron family. Younger brother Kevin is also making a name for himself in pursing major league baseball in the Arizona Diamondbacks organization.

As a big brother to another rising star, C.J. Cron hopes for Kevin to live out his dream even when playing against each other.

“I remember this spring training, he got called up to play in his first big league game and it was ironically against us.”

Cron remembers it also being their mother’s birthday that same day.

“It was fun to watch him run out there and do something that he has been working hard to do for so long,” Cron said.

Nothing compares to a little camaraderie to help bring a family together. In fact Arizona serves as a meeting ground for the Cron family. They all still live in the Valley and Cron returns home during the off-season.

“Living close to them is important to me and the winter [in Arizona] is pretty perfect so it works out really well for me,” the 26-year-old added.

As for the rest of the season, Cron is expected to remain on the DL until September.

“When I get back, I want to be able to help this team win ball games and get this season back on track,” he says.