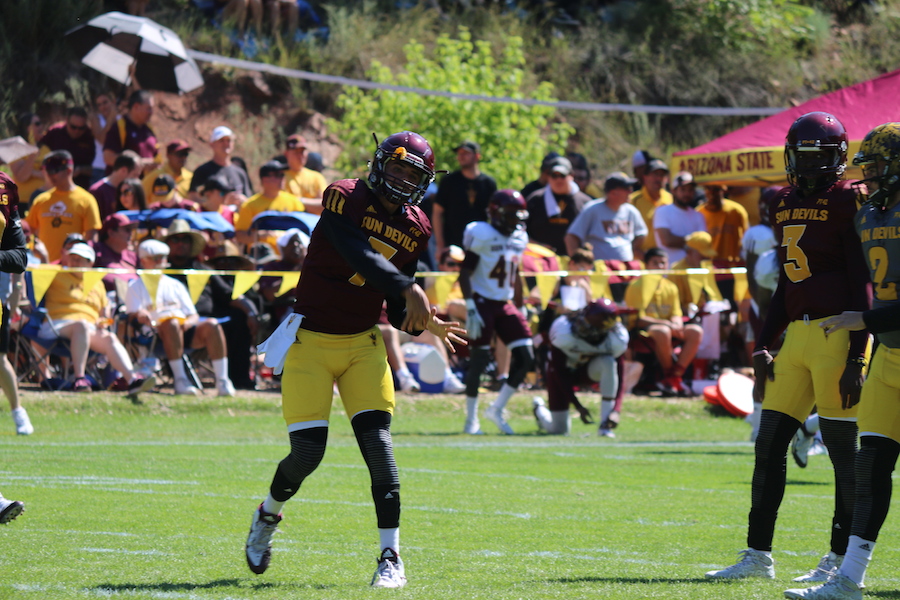 The offseason chatter has been all about coaching turnover in Tempe, as coach Todd Graham has lost numerous longtime assistants and coordinators, headlined by the departure of associate head coach Mike Norvell to Memphis.

But there’s plenty of turnover between the lines this offseason as well, and not just under center. Here’s five major questions  coach Graham will be looking to answer in Spring football and into the Summer.

The QB Battle: Obviously this is the biggest question. Will it be the Manny Wilkins or Brady White taking over for Mike Bercovici? Whoever Graham chooses will likely determine the style of offense he and new OC Chip Lindsey will be running in 2016, as Wilkins and White vary drastically in playing style. White profiles as a pro-style pocket passer with sneaky mobility, but who will make most of his plays from inside the pocket. Wilkins drew comparisons during his recruitment to Marcus Mariota for his elusiveness and speed outside of the pocket. Both are highly touted, and Graham has spoken highly of each guy, but chances are he’ll want to narrow it down to one before the Fall.

Offensive line: Christian Westerman, Vi Teofilo, Nick Kelly, William McGhee, Evan Goodman. One of these things is not like the others. Here’s a hint: the thing that’s different about him is that he still plays for Arizona State. That’s right, four fifths of ASU’s 2015 starting offensive line graduated last season, leaving only redshirt senior Evan Goodman to protect whoever wins the quarterback battle. The new offensive line will not only need time during the Spring to gel as a unit, they’ll need time for Graham and O-line coach Chris Thomsen to figure out who they even are. Incumbent Goodman has a year left, but the Devils will need to determine whether they want experience or youth on the line, as their options include anything from true freshmen to redshirt seniors.

Offensive weapons: D.J. Foster set records for receiving consistency with the Sun Devils, but he’s gone now. So are Devin Lucien and Gary Chambers. Tim White, Ellis Jefferson, Cameron Smith and Gump Hayes remain, and hot new recruit N’Keal Harry has arrived. Eric Lauderdale, once thought to be the heir apparent to Jaelen Strong, is now a redshirt senior in his final season with the team. Who will step forward and take over the snaps and targets that will be lost with the departure of Foster and Lucien, and can one of these fill the still-unfilled shoes of Strong?

Pass rush: For better or for worse, the calling card of the 2015 Sun Devils was probably the blitz. Part of that was Graham’s penchant for the aggressive, but another part of it was also the reality that the defensive front couldn’t get pressure. The Devils lived in the backfield last year, but they also gave up big plays like candy. Graham’s not likely to stop blitzing, but a better core pass rush would free him up to be a little more diverse with his approach. Unfortunately, the Devils lose nose tackle Demetrius Cherry and Devilbacker Antonio Longino, both hallmarks of the pass rush last season. Will JuCo transfer Dougladson Subtyl make the immediate impact his scouting report suggests he can? Is Marcus Ball ready to step into a role of prominence and deliver on the promise of his athleticism? Who will replace the 50 tackles and team-leading 11 sacks that depart with Longino? All questions that need answering this Spring.

Secondary: Kareem Orr and his six 2015 interceptions are still in Tempe, but Kweishi Brown, Jordan Simone and Lloyd Carrington, with their combined five picks in 2015, are gone. That’s a third of the Sun Devils’ interceptions last season, not to mention their combined 159 tackles. Who steps up in their place? The secondary was full of talent last season but also had a tendency to get burned for huge plays. T.J. Rushing joins the team as defensive backs coach, and will have his work cut out for him in replacing three long-tenured members of the secondary.