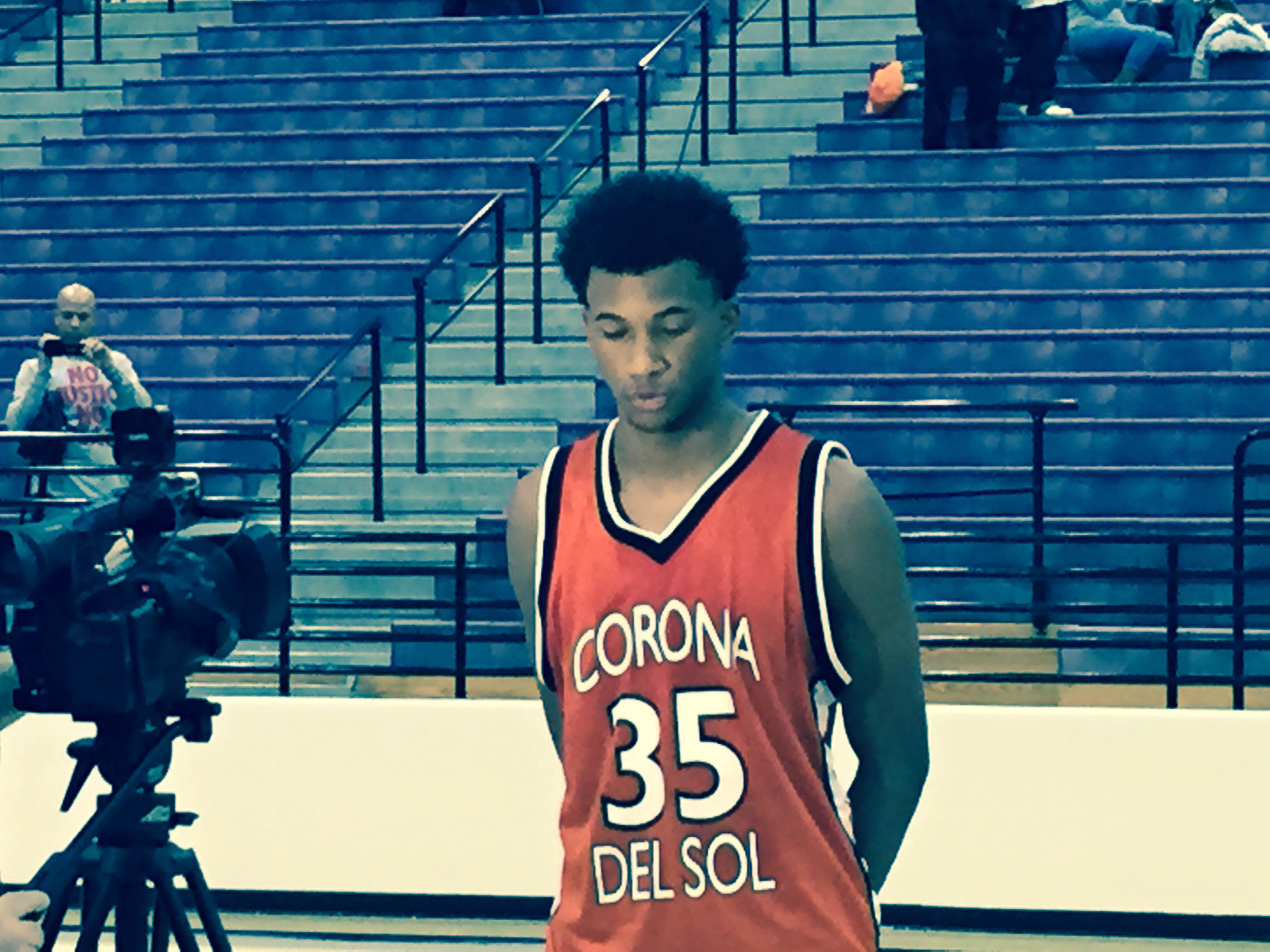 Corona basketball took the court at Hamilton High last week after coming off a rare one-point loss to nationally ranked Sierra Canyon (CA). Last time the Aztecs were in the building, nearly two years prior, Hamilton had slowly and methodically found a way to beat Corona, who at the time, was led by current Oregon freshman guard Casey Benson. Corona went on to lose their next regular season game at Dobson as well. That was January 29th, 2013. They haven’t lost to an Arizona team since.

I was at the game, nearly two years ago, when Hamilton upset Corona. This time, I grabbed a front row seat for the Aztecs’ return so that I could witness for myself the team that boasts New Mexico commit Dane Kuiper, two-sport star Cassius Peat, super-sophomore Alex Barcello, and of course, the top ranked player for the class of 2018- Marvin Bagley III.

I watched the 6’10” Bagley closely in pre-game warm-ups. He was big, sure, but didn’t look physically imposing in the layup line next to Kuiper, and he didn’t exactly dwarf Hamilton’s 6’7” James Sosinski. I was curious as to what it was about Bagley, aside from the height, and the various highlight tapes floating around, that made him so special on a team filled with special talent.

From the opening tip, Hamilton, though struggling mightily this season, seemed energized by the presence of the state’s top team in their home gym. Just after the start of the second quarter, Husky forward James Scoggin hit a turnaround jumper to close the Aztec lead to 14-12, causing Corona coach Sam Duane to call a timeout. I pulled out my phone to tweet the score, and right there on my newsfeed was a blurry picture of Marvin Bagley III with his arms pinned back, chest out, and a hollow, menacing stare on his face. The tweet was from ESPN’s official account.

The tweet read “Meet Marvin Bagley III, a 6-foot-10 high school *freshman* who does things like this:” Attached was a video from Gilbert-based “AZ Finest Mixtapes” embedded in a post authored by Patrick Dorsey, showing Bagley throwing down a left-handed dunk on some poor soul who didn’t even see it coming. The stare down afterward punctuated an already stunning show of athletic aggression. I watched the 37-second clip and looked up to see Bagley standing five feet to my right, receiving instruction in the huddle. Bagley had been catapulted onto the national stage, and he probably wouldn’t find out about it for another hour or so.

After the timeout, Bagley had back-to-back dunks that created a small cushion for the Aztecs.  Around the same time, SportsCenter’s official Twitter account also tweeted the link to the dunk video. It was 7:45pm on Tuesday in south Chandler, and while only a few hundred people occupied the Hamilton gym, Bagley’s basketball prowess was on display for upwards of 40 million social media users worldwide.

Corona went on to crush Hamilton, 69-48, and news of Bagley’s tweeted video made its way to the Hamilton student section, who call themselves the “Dog Pound.” Members of the Dog Pound, who had been heckling Bagley, as they do every opposing athlete who sets foot in their home gym, went from foe to fan as soon as the buzzer sounded, seeking out photos with the freshman (Bagley happily complied). The same kids who walk down hallways lined with framed photographs of great Husky athletes of yesteryear like Terrell Suggs, and more recently Ashlee Moore and Cole Luke, and who attend classes with athletes like SEC-bound football player Caleb Peart, were suddenly not immune to heaping reverence on the towering basketball prodigy. Marvin Bagley III, though already a well-known name in basketball circles, had arrived.

I immediately began to wonder about whether or not this type of attention was a good thing. Sure, Bagley has already received plenty of publicity locally. In fact, this isn’t even the first time he’s received recognition from national media sources. Bagley had a scholarship offer from NAU just one month after turning 14, and when several colleges soon followed suit, Bleacher Report, Yahoo and ESPN all caught wind of, and disseminated Bagley’s story.  Still, this is different. Marvin Bagley III is in high school now, and there’s a media presence at every single one of his games. ESPN and SportsCenter gave even the casual basketball fan a reason to follow a freshman’s day-in/day-out hoop journey in a way they didn’t have the ability to when prep phenoms LeBron James or Kevin Durant were entering high school. Even NBA rookie Andrew Wiggins, who was a freshman at Vaughan Secondary School in Ontario, Canada only six years ago, didn’t have this same Twitter/Facebook environment conducive to making kids superstar athletes while they also navigate puberty. Everything Bagley does from this point on is going to be dissected and scrutinized. In fact, that’s already started.

The social media blowback to Marvin Bagley’s dunk was swift and predictable. Perhaps the most discouraging display of reactionary and judgmental observations came in the form of comments on SportsCenter’s Facebook link to the video. The comment thread runs nearly 1000 deep, and these are the ones that seem to capture the dismissiveness and cynicism of the modern armchair sports critic the most:

How could a 37-second clip of a freshman in high school performing an exciting athletic feat, and reacting to the excitement that his dunk brought to the home crowd, be akin to act of criminality? The response was the same on Twitter. Of course, some of the people who made comments about a 15-year-old Marvin Bagley III being a “thug” and a “punk” needing to “act like he’s been there before” (despite it being his first ever high school game) were also tweeting links to their favorite professional hockey in-game fistfights with no mention of the word “thug” or “punk” (I suppose that type of inconsistent logic is none of my business). As frustrating as it may be, a significant portion of Marvin Bagley’s life as an athlete is going to exist in this vacuum of highlight tapes and reactions that make assumptions about his academic capabilities (by all accounts he’s had perfect grades throughout his short academic career), upbringing, coaching, and moral character.

I went to Corona’s Monday night home game against Division 2 defending state champion Shadow Mountain to speak with Aztec coach Sam Duane about his views on having a freshman who is close to becoming a household name. Marvin Bagley III was spectacular, scoring 19 points, grabbing 14 rebounds and swatting away two shots in the narrow 80-74 Corona win. He didn’t look like a thug or a punk out on the court, although I’m not really sure what that would look like to begin with. He was unselfish, played stellar defense, refused to get down on himself early on when his shots weren’t falling, and showed his versatility by bringing the ball up the court himself on several occasions. To me, he looked like a kid worthy of the attention he’s been getting- a coachable prep athlete whose elite gifts are used for the good of the team in the flow of the game. Whereas some factions on social media would have you believing Marvin Bagley III is everything wrong with the game of basketball in 2015, I saw the exact opposite- a role model for the naturally gifted to emulate.

“Every one of his teachers has personally come by to tell me how good of a kid he is,” said coach Duane after the win. “There’s always going to be people who are jealous or who want to bring people down, but if they really want to know who he is they can ask any of his teachers.” Visibly agitated by the thought of people speaking negatively of his player, Duane added, “That’s not a line. It’s the honest-to-God truth, and to those people who would try to bring him down I’d say he’s a student, he’s humble, he plays hard, he does his job, he’s competitive, and he’s a freshman. Let him be.”

Can we let him be? Can we avoid making snap judgments about who a kid is, and will end up being, based on video clips and social media mentions? Can we just sit back, be supportive, and enjoy the show? It remains to be seen. Bagley has garnered more nationwide conversation in the past week than recent newsworthy and record setting Arizona prep athletes like Ryan Hoffer, Ky Westbrook, and Christian Kirk did in their entire high school careers. This is unprecedented territory for the Arizona sports fan, and the onus falls on us to judge Bagley for what, and who he truly is-

A good kid with an incredible gift, but a kid nonetheless.