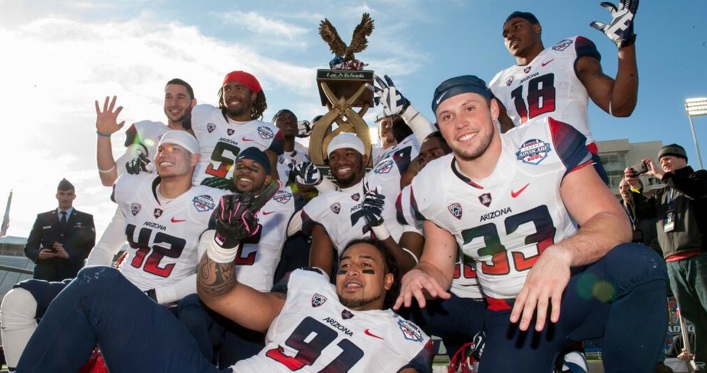 Arizona finished their 2013 campaign much like they started it. Lots and lots of offense.

The Wildcats fired on all cylinders on Tuesday morning with a dominating 42-19 win over the Boston College Eagles of the ACC to be AdvoCare V100 Bowl Champions.

“It’s exactly how I pictured it,” said running back Ka’Deem Carey to ESPN after the game. “Everything went our way. We went out there and balled. We had fun out there today.”

The only thing that Boston College dominated in the game was time of possession. After the first quarter, they had a 12 minute to two minute advantage but it did not seem to matter as the Wildcats scored in just 41 seconds on their first drive and held a 21-6 lead at the half.

It was a battle of Doak Walker Award finalists with Carey and Boston College running back and the Doak Walker Award winner, Andre Williams. Overall it was a frustrating day for Williams as he averaged under three yards per carry with 75 rushing yards on 26 carries and one touchdown. Carey on the other hand did his thing with 165 yards and two touchdowns on 28 carries.

The Wildcats got it done through the air as well. The Bowl games’ offensive MVP, quarterback B.J. Denker ended his college career with a bang throwing for 276 yards and two touchdowns and also rushed for a touchdown. It was also a big day for two young Wildcat receivers. True freshman who has been getting it done all season, Nate Phillips, set an AdvoCare V100 Bowl receiving yard record with 194 yards receiving on nine catches. Trey Griffey also got into the act catching the first two touchdowns of his collegiate career.

“Thats what we do,” Carey explained. “We go fast, we put the points up on the board and the defense gets stops.”

The Defense did get stops and as mentioned, frustrated the nations top running back in Andre Williams. They forced Boston College to have to move the ball through the air and as a result, came down with two interceptions. One of which by sophomore William Parks who returned it for a touchdown and was in the end named the Bowl games’ MVP.

The Wildcats are now 2-0 in bowl game sunder Rich Rodriguez and have won eight games for the second consecutive season.

At the podium receiving the bowl trophy, Rodriguez said “We have a great thing going at the University of Arizona.”