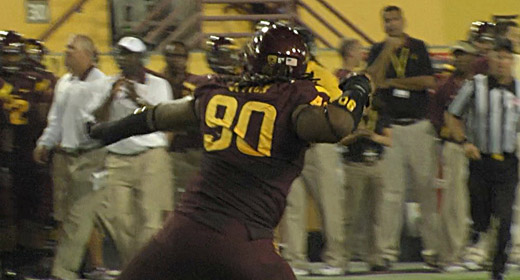 Five things to watch in this Thursdays season opener against Sacramento State. Kickoff at 7pm Thursday night at Sun Devil Stadium. THe game is on TV on the Pac-12 Network.

1) Sacramento State won at Oregon State in 2011 and beat Colorado last season. So, this is not a pushover game. Just look at what happened over the weekend to Oregon State(upset by E. Washington) or North Dakota State winning at Kansas State. Parity reigns supreme in college football. If your expecting ASU to win 55-0, those days are over. Every school has talent to compete.

2)Control Sac. State QB Garrett Safron
-Safrano threw for 2,540 yards last season and was the teams second leading rusher. Last week in a 24-0 loss to San Jose State, Safrano threw for almost 200 yards and had a couple of interceptions.

4)ASU pass rush against the Sacramento State offensive front.
Last week, Sac. State was only able to rush for 86 yards and San Jose State was able to sack the Hornets 3 times. I am guessing that All American Will Sutton and the rest of the ASU defense will be able to pin their ears back.

5)Put the plow down and let the Arizona State running backs do their thing.
Sacramento State allowed 225 yards passing and 142 rushing yards in week one. The dynamic running back group of DJ Foster, Marion Grice and Deantre Lewis should be able to break free for a big day.