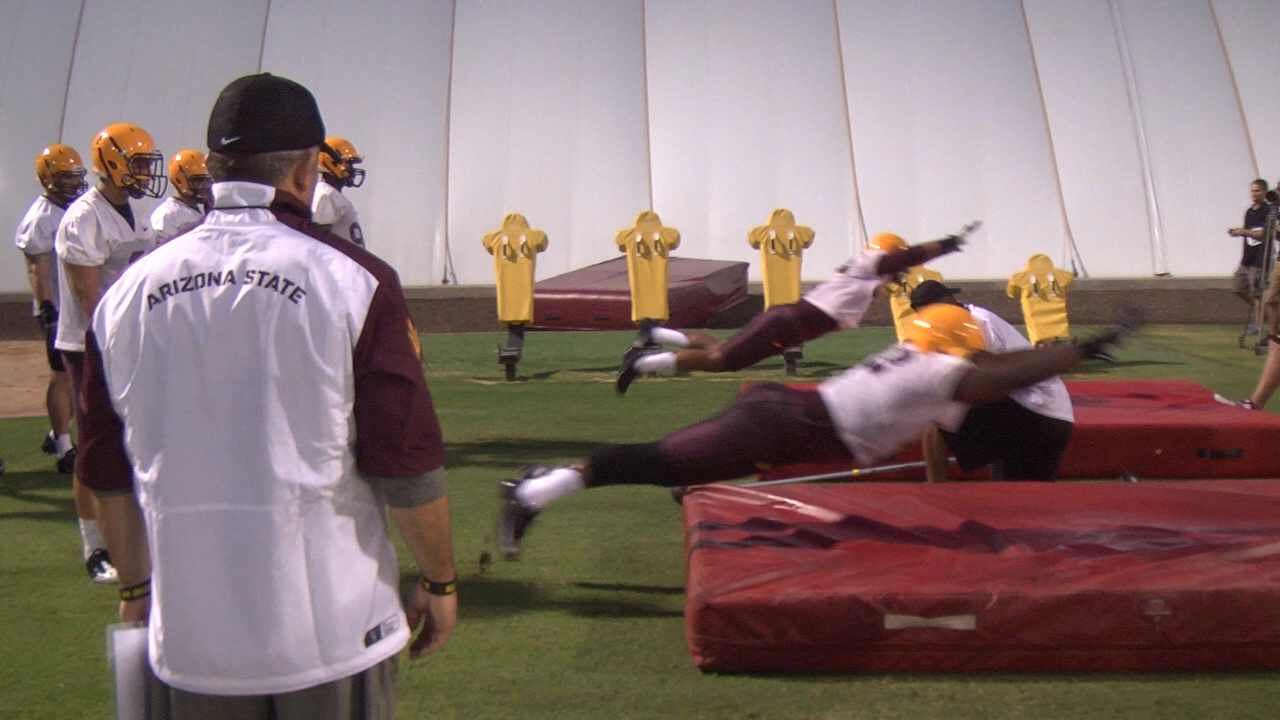 The Sun Devils are less than a month away from their season opener against Sacramento State at Sun Devil Stadium.

The team will head up to Camp Tontozona next week for a week of practices, culminating in a scrimmage next Saturday.

Before they head up the hill for that special kind of fun, the team had another kind of fun down on the Tempe, Ariz., campus, as they kicked off a “pre Camp T” set of practices on Tuesday.

The veterans did their part in the morning, while the newcomers had their own workouts in the evening.

For it to be their first set of workouts together, head coach Todd Graham was pleased with what he saw out of them. Graham could tell that things began to click with the players as the practice moved on.

“I thought it was good,” Graham said. “Obviously there’s a difference between the guys that have been doing it for a year. I was very, very impressed with how they communicated, how we lined up, very few penalties, guys competed well and got after it.”

Graham saw a change in the players as the evening wore on, but he also saw a different kind of change in them too. He could tell the players were frustrated at times with the tempo of the practice.

“They gotta get used to the strain,” Graham said. “That’s kind of the hardest thing, is the mental aspect, the mental maturity, being able to transition.”

“I take great pride in that, I think that we’ve got a very good system to be able to transition guys,” Graham said. “We’re being very, very simple right now.”

Former Notre Dame Prep tight end Grant Martinez is one of the newcomers to the Sun Devils. He was out on the practice fields putting in work.

Martinez tried not to let the controlled chaos surrounding him take him out of his game.

“As a three-back, they demand a lot out of us, so we’re running back and forth, motioning, running routes, blocking back. It’s a different world out here,” Martinez said. “I’m gonna have to get used to it, but I like what I’m doing right now.”

Martinez has taken time to get to know tight end Chris Coyle and pick his brain on what he does to make himself successful at that position.

After all, who better to learn from if you’re Martinez than Coyle?

“He’s a mentor to me,” Martinez said. “Film study, we go in the bubble, we run routes, he corrects me, he gives me little tips on running routes, how to block. Little things to help me get to where he is right now.”

Chans Cox is used to being a winner. He did it his whole four years at Blue Ridge High School, and he’s hoping to continue that career trend with the Sun Devils.

Tempo for him was the biggest thing to get used to on Day One.

“It’s just a lot faster,” Cox said. “We did a lot more sprints and conditioning, but we all incorporate that into practice here and that just makes it a lot faster.”

Cox has been taking reps so far at the DevilBacker position. He realizes just how crucial that spot is to the success of the Sun Devil defense.

“It’s a big position, that’s why we have great players like Carl Bradford playing there,” Cox said. “I just have to really get used to the tempo, it’s really fast, it’s big college football and it’s Devil football.”