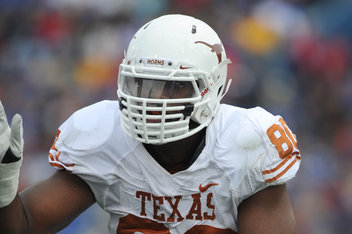 The Cardinals addressed a need at the start of day three taking a pass rushing defensive end out of Texas, Alex Okafor.

“I knew they were interested,” said Okafor. “I met with them at the Combine and the second day of the draft they called me and told me to hang on…I am glad they picked me.”

In his senior season season, the 6-4, 261 pound Okafor had 12.5 tackles for loss including seven sacks and caused interceptions on four of his 11 quarterback pressures. In addition, he has 50 tackles and two forced fumbles. He was named an All-American by the American Football Coaches Association and was an All-Big 12 conference pick as well.

It is not the first time the Cardinals have selected a Texas pass rusher 103rd overall in the fourth round. They took Sam Acho with the exact same pick in 2011. If they didn’t seem similar enough just based on the same school, position and spot taken in draft, their numbers at Texas were almost identical as well as Acho had 23.5 sacks and 148 tackles at Texas. Okafor had 23 sacks and 150 tackles.

“It’s nuts,” Okafor mentioned. “It’s crazy around the same time in the draft, same team and they come after me. It’s just a blessing.”

“Couldn’t be happier my bro @aokafor80 (Alex Okafor),” said Sam Acho on Twitter. “The @AZCardinals and the #BirdGang are gonna love this guy… Opposing Quarterbacks won’t”

“I looked at them dead in the eye and said I was confident in my athletic ability and I know I can play that position for them,” Okafor stated.

That was only the beginning for the Cardinals in the fourth round. Their second pick at 110 was originally owned by the Chargers but was dealt to Arizona in the trade that brought Manti Te’o to San Diego. The Cardinals then used that draft pick and traded it as well. Sent it to the New York Giants who drafted quarterback out of Syracuse Ryan Nassib. In return the Cardinals received the 116th overall pick in the fourth round and a sixth round pick at 187th overall.

With that 116th overall pick, the Cardinals finished their work in the fourth round by selecting offensive guard Earl Watford from James Madison.

“I am super excited,” Watford said. “It’s crazy right now; being able to go in the fourth round, from JMU, that’s a big deal here. Friends, family, teammates, they’re al here celebrating with me.”

The nay sayers out there will say that playing at James Madison, he might not have played against the top-level competition to have him ready for the next level. However, Watford is confident that it will not be a problem.

“When you first get to college you are told you’re big enough for the NFL and you’re quick enough if you keep working,” Watford explained. “I really didn’t think about it too much until my junior year.”

Experience, Confidence Helping the Game Slow Down For Alex Okafor

Defensive lineman Markus Golden (33) heads to the end zone after his interception Saturday Sept. 7, 2013 against Toledo. Golden was a running back in high school.

For the Cardinals, the Second Round is Golden