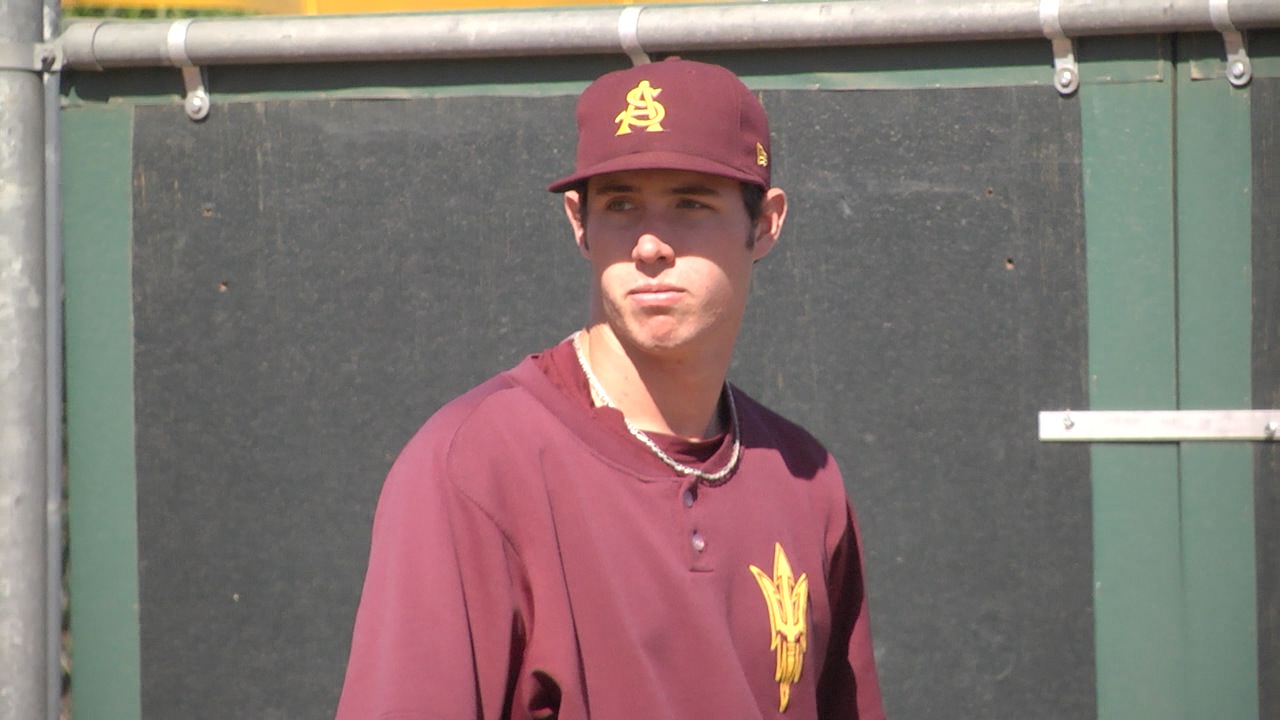 It is not very often that a Freshman joins a college baseball team and becomes the number two starter in a team’s rotation. But that is the case for Arizona State freshman Ryan Kellogg.

The native of Whitby, Ontario, Canada has bursted onto the scene with a stellar 8-0 record in eight starts, a 2.2 earned run average, 34 strikeouts to nine walks and an opponent batting average of .202. It has been a start to his Sun Devil career that he was not expecting.

“Before the season started I was convinced that I wasn’t even going to start,” said Kellogg. “People back home or people here would ask me what I thought my role would be and I said I was going to be coming out of the pen…To be able to have a start like this. To be able to start for the team and be so successful, was definitely surprising and a pleasant surprise.”

Kellogg is not your ordinary freshman. Before stepping foot on campus as a member of the ASU baseball team, Kellogg made a name for himself competing and gained invaluable experience on the Canadian Junior National team. He was the team’s MVP last year and had the opportunity to pitch all over the world. It was those experiences that had him prepared for any adversity he would face as a college player.

“Playing out of your element, playing in the Dominican, Cuba, Korea, all of those places where you know you’re out of your element and are uncomfortable,” explained Kellogg. “Just getting used to that because college is the same thing.”

Kellog’s performance pre-ASU already had him on the radar for Major League Baseball teams. He was selected in the 12th round (385th overall) of the 2012 MLB Draft by the Toronto Blue Jays. However, Kellogg decided to pass on a professional career for now and play for the Sun Devils.

“I came down for my visit and I absolutely loved it down here,” Kellogg added. “I think it will be good for my development. Hopefully in three years I can be a Blue Jay again but for now I’m just living the dream down here playing for ASU.”

While each start for Kellogg has been dominant, none might be more spectacular than his performance against the Oregon State Beavers in Corvallis back on March 23rd. Coming off a loss to the Beavers where the team had only one hit in the game, ASU held a team meeting to regain focus.

The result? Kellogg put his team on his back and threw a no hitter. He was two defensive errors from a perfect game as he didn’t walk a batter either. It was the first no hitter he has ever thrown.

“It was a fun game but it was also really stressful, especially near the end,” Kellogg explained. “Once it was finally over it was a big relief and we all got to go out and celebrate. It was really fun.”

After the game, Kellogg was told to sign his autograph on the bill of the hat he wore in the game. He wasn’t sure why at first but later learned that the hat was being sent to the NCAA hall of fame.

To think for Kellogg and the Sun Devil baseball team, this is only the beginning.