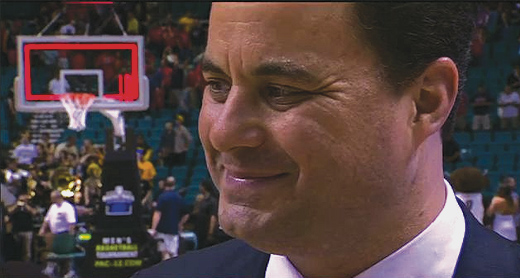 The University of Arizona’s Las Vegas luck ran out Friday night in the Pac-12 conference semifinals at MGM Grand Arena as top-seed UCLA stormed back from an 11-point second half deficit to edge the Wildcats.

So now Sean Miller’s team waits to here their post-season destination on Selection Sunday. The ‘Cats (25-6) have been more consistent the past few weeks, and Miller believes they are playing some of their best basketball at just the right time.

“I think we’ve earned a good seed,” he said after the loss to the Bruins. “We’re excited to be a part of the tournament. There’s nothing more spectacular as a college basketball player than being a part of March Madness and the NCAA tournament.”

“The sky’s the limit for us,” the steady Hill explained. “We have to stay together as a team. Keep playing as a fist and not letting outside sources dictate our play.”

UofA was hurt down the stretch against UCLA with key breakdowns defensively and the Wildcats bench receiving a technical foul after Lyons was called for a questionable double dribble late in the second half. After the game Miller took the blame for the technical which he said swung momentum to the Bruins.

Many believe the ‘Cats will be around a four-seed and could be placed in the South Region bracket.