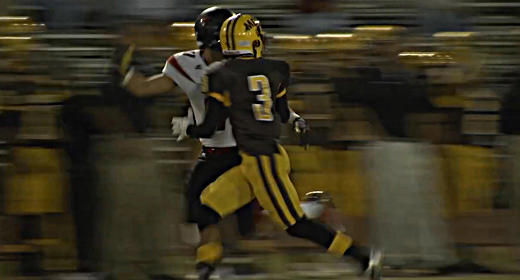 Priest Willis is one of those rare talents that’s a step above those who are considered really good talents.

That’s why he has a list of his “Top Seven” colleges he’s looking at, which are LSU, UCLA, USC, Virginia, Nebraska, Florida State and Notre Dame.

Those schools are staring back at him just as hard.

Willis, Marcos de Niza High senior, is considered to be one of the top defensive backs in the country, which is why the aforementioned schools are after him.

Willis and his stepfather Michael Walker recently took a trip to the Bayou to visit Coach Les Miles and the Tigers, and he liked what he saw from LSU.

“It was a nice visit,” Willis said. “I felt real at home there.”

Willis says he liked what he saw from the coaching staff and what they’re getting done in Baton Rouge, La.

Arizona State figures to be in the mix for Willis as well, although he says he holds all of the schools in the same regard, with no one school topping another, at least not yet.

“I like ASU a lot, I really see myself in that secondary,” Willis added. “It’d be great playing for the hometown [team].”

Willis says football isn’t the primary reason why he’ll be going to college: academics is. He says he wants to major in business, and focus on sports marketing and/or broadcasting.

“I just want to be in sports,” Willis said. “I just wake up loving sports and I just don’t want that to stop, even if I stop playing football.”

Willis says he’s glad he doesn’t have a “big head,” when it comes to the whole recruiting process. He knows he’s going to have to start from the bottom and work his way to the top when he gets to college, and he’s good with that.

“I don’t look at this recruiting process as anything, I just look at it as a blessing,” Willis said. “They’re seeing your talent on a high school level, and now you’re playing with the big boys [at] the college level and that’s a whole totally different thing.”

“Going in there, I’m just gonna work my [tail] off and try and be the best,” Willis said. “I’m looking to compete and show them a freshman’s ready to play, and that’s what I think I have the ability to do is play and be an impact.”

As good as many people think Willis is, he’s quick to admit that he’s not near as good as he knows he can be.

“There’s a whole bunch of stuff I need to work on, I don’t even know half the game,” Willis said. “That’s why I’m in a learning process, I’m a student of the game right now.”

Willis says he loves watching tape on the late Sean Taylor and current Falcons defensive back Asante Samuel, just to get tips on how the pros did it and continue to do it.

Willis says he needs to work on his lateral speed, his foot quickness, along with his hand and eye coordination, if he expects to someday reach Taylor and Samuel’s level.

“That’s why I’m happy to be in the situation I am,” Willis said. “To go to the next level and get that coaching from coaches who’ve been there, played the game and coached greats.”

Willis told me that there was a time when he thought he wouldn’t even be recruited, which caused him to question himself and his abilities.

However, he relied on his faith in God, and his mother and his stepfather Michael told him to keep believing, praying and working out and things would eventually turn around, which they did.

“God’s just been there with me through the whole process, just looking over me and He has blessed me,” Willis said. “Every time I think about it, God is great.”

“I was at a low, and I just had to being that character out of me and really show that I really want this, and I’m not gonna give it up,” Willis said.

Willis said he’ll continue to look up to the NFL greats and take things from them and apply it to his game, but in the end, he says he has to walk down his own path.

2017 Prospects on the Cusp of First Offers, Film Breakdown of 2017 Pass Rusher