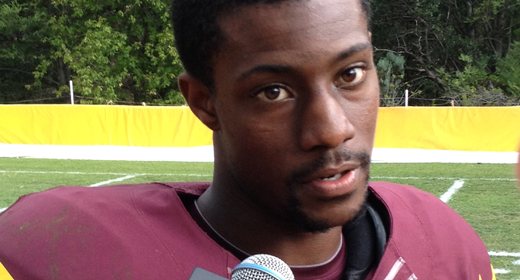 Todd Graham and his staff have not only been looking for a starting quarterback on their roster, but a go-to wide receiver for that quarterback to throw to.

Although Graham didn’t reveal who will start against NAU, he may have found his number one receiver judging from what we saw Saturday from senior Rashad Ross.

One of the few receivers with game experience for the Devils, the senior put on a show in front of nearly 5000 fans in attendance at Camp Tontozona for ASU’s scrimmage in the pines.

Ross caught five passes for 193 yards, including touchdowns from 20, 92, and 37 yards. Camp T has served as a time for redemption for the former junior college standout and Vallejo, California native following a sluggish start to pre-season camp.

“I stopped worrying about stuff,” after Ross burned a host of different Sun Devil corners with his explosion off the line and burst in the open field with the ball in his hands. “Coach told me…if you want to play, you got to show it and you got to do it now.”

As Graham and offensive coordinator Mike Norvell look to form their set of receiver packages heading into the season, the former First-Team All-American at Butte College has taken it to another level after being demoted to the second-string offense for what has been described by many as a poor attitude.

His hard work is paying off and it’s certainly caught the attention of his head coach.

“Rashad’s really had an outstanding camp,” Graham said Saturday afternoon. “I feel the wide receivers as a whole have been the most improved improved unit since we’ve arrived [at Camp Tontozona].”