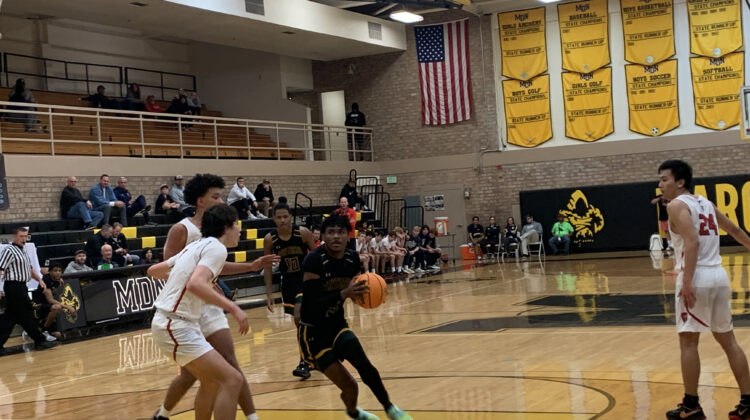 Tied up at 61 on Monday’s tournament at Marcos de Niza High School between Peoria High
School (15-3) and Scottsdale Christian Academy (10-6), Peoria senior Elijah Ward was there for
the putback fadeaway jumpshot following a missed layup before the clock expired to put the
Panthers ahead 63-61.

The Panther bench cleared the court and chased Ward around the court in excitement. In a
celebration that last no longer than seven seconds, the Panthers were back into a huddle and
ready to line up and shake hands.

When the team came out of the locker room, Ward wasn’t drenched in Gatorade or had to clean
shaving cream off his face.

It was already back to business for the Panthers.

“We still need improvements,” senior Calvin Windley said. “We need to not settle after this one
and every game look forward to getting the dub.”

Peoria High has been without its leading scorer, senior Andrew Camacho, since Dec. 23 after
injuring his hand that has him in a cast with no timetable for a return according to head coach
Patrick Battillo.

To replace the missing 29.1 points per game, Battillo is expecting every player to step up but is
leaning on Windley to lead the team.

“He has to lead us,” sophomore Caden Bass said. “He’s very important to the team. His
leadership role has to take a roll.”

Windley is a three-year varsity player who leads the team in rebounds (9.0), steals (2.6) and
blocks (0.9) while averaging 16.6 points per game. With the emergence of Bass this season,
second leading scorer for the Panthers with 17.9 points per game, Windley’s points per game has
dropped from his junior year but just like his teammates, is taking advantage of extra shot
opportunities with Camacho down.

“I’m doing okay but I need to push myself to a higher level,” Windley said. “I expect the most of
myself and I’m working everyday to accomplish that.”

Since Camacho’s injury, the Panthers have taken turns turning out career best performances.
Windley erupted with a double nickel 55 point performance in a blowout against Goldwater on
Jan. 12. Sophomore Desmone Brooks-Conley put on a 25 point shooting clinic against Scottdale
Christian on Monday while Bass tied his career high 26 in a victory over Cactus on Jan. 11.
“It’s a huge step for everyone on the team because there’s just more eyes on everybody and
everybody gets to eat on the team,” Bass said.

Peoria sat at 11-1 before Camacho went down, then immediately lost two of its next three games
but are riding a three-game winning streak following Monday’s victory.

The goal and expectations for the team hasn’t changed for Battillo. Win a state championship.
“I can’t even explain what it would mean to me,” Windley said “It would mean a lot.”

No seniors, no problem for top-ranked and unbeaten Valley Christian