One important facet of the roster-building process, the NFL Draft declaration game, has broken the Pac-12’s way this winter.

We won’t know whether it qualifies as a lopsided victory or narrow escape until later this week. While Monday is the deadline for early entrants to declare for the April draft, news will trickle out for several days. Some prospects simply aren’t interested in announcing their decisions on social media. (Imagine that!)

However, enough stay-or-go decisions have been made public for the Hotline to offer preliminary judgment …

Our verdict: winner
Comment: The Wildcats aren’t loaded with pro prospects but have retained three key players: tailback Michael Wiley, receiver Jacob Cowing and left tackle Jordan Morgan. The least-known of the trio outside of Tucson, Morgan’s decision is the most important. He might have jumped into the draft if not for a season-ending knee injury against UCLA. Assuming good health for the start of the season, Morgan will be one of the Pac-12’s best at a high-value position.

Our verdict: case dismissed
Comment: Several key players are out of eligibility, including star linebacker Kyle Soelle, while other starters have transferred. (Offensive lineman LaDarius Henderson is heading to Michigan, for example.) But the direct damage to ASU from draft decisions is minimal as new coach Kenny Dillingham works to retool the roster.

Our verdict: winner
Comment: We considered dismissing this case, as well, since the Bears weren’t exactly loaded with draft-eligible talent. However, one key stay-or-go decision went the direction they hoped: Jackson Sirmon, a first-team all-conference linebacker, will return for the 2023 season. We should mention that punter Jamieson Sheahan declared for the draft — not because of the ramifications for next season as much as because we get a kick out of punters declaring for the draft.

Our verdict: case dismissed
Comment: Much like ASU, the Buffaloes had a limited number of players whose NFL decisions would impact the trajectory of the program, for better or worse, in 2023. (It’s all about coach Deion Sanders working the transfer portal.) The departure of receiver Daniel Arias isn’t nearly significant enough for a verdict.

Our verdict: winner
Comment: The biggest news broke a week before Christmas, when quarterback Bo Nix announced his plan to return. But he’s not alone in that endeavor. Offensive lineman Steven Jones passed on the draft. So did linebacker Mase Funa. Defensive linemen Brandon Dorlus, Casey Rodgers and Popo Aumavae are returning, too. (The Ducks will be stacked up front.) However, two of the top defensive players in the conference, inside linebacker Noah Sewell and cornerback Christian Gonzalez, a potential first-round pick, are turning pro.

Our verdict: loser (by a hair)
Comment: Many of OSU’s key players have used up their eligibility — cornerback Rejzohn Wright, for example — and another anchor, linebacker Omar Speights, is transferring. The list of top talents who had the opportunity to return for the ’23 season and instead chose to enter the draft features cornerback Alex Austin and tight end Luke Musgrave. As a counterweight, the Beavers got good news on the draft front from safety Kitan Oladapo.

Our verdict: loser
Comment: This ruling shouldn’t come as much surprise — very little has gone right for Stanford over the past 18-24 months. Quarterback Tanner McKee declared for the draft in early December, perhaps a year too late. (His value plunged to such an extent during Stanford’s dismal season that the university should offer him compensatory damages.) And not for nothing: The Cardinal also lost all-conference cornerback Kyu Blue Kelly. It wasn’t long ago that Stanford possessed enough players with high-end draft value to create drama at the deadline.

Our verdict: loser
Comment: The Hotline delayed judgment on the Bruins until word from Westwood arrived at lunchtime Monday that star tailback Zach Charbonnet is headed to the NFL. (No surprise: He’s the rare tailback who warrants a high-round valuation.) Charbonnet joins a slew of teammates who have already declared, including receiver Kaz Allen and offensive lineman Jon Gaines. However, a key decision isn’t yet public: edge rusher Laiatu Latu.

Our verdict: loser
Comment: This decision carries slightly more nuance than you might expect. Yes, the Trojans took a combination punch to the gut with the losses of star receiver Jordan Addison and the top defensive player in the conference, lineman Tuli Tulipulotu. However, offensive lineman Justin Dedich and linebacker Shane Lee are returning. And a vital point: Quarterback Caleb Williams isn’t eligible for the draft until the spring of 2024, thus limiting the range of outcomes for the Trojans.

Our verdict: winner
Comment: The Utes lost a hefty amount of talent but still emerged as a winner in the declaration game, primarily because quarterback Cam Rising is coming back (although his health remains an issue following a serious leg injury in the Rose Bowl). Top receiver Devaughn Vele and all-conference tight end Brant Kuithe are returning, too. That said, the Utes lost Clark Phillips III, perhaps the top cornerback in the conference, along with tight end Dalton Kincaid and linebackers Gabe Reid and Mohamoud Diabate.

Our verdict: winner (by a landslide)
Comment: The Huskies lost their starting tailback (Wayne Taulapapa) and a key edge rusher (Jeremiah Martin) but nonetheless finished as the Pac-12’s biggest winner. Because quarterback Michael Penix is returning. So are his favorite targets, receivers Jalen McMillan and Rome Odunze. And edge rushers Bralen Trice and Zion Tupuola-Fetui. And mammoth defensive tackle Tuli Letuligasenoa. And all-conference left guard Troy Fautanu. Tally it up, and those seven form the core of what should be a preseason top-10 team.

Our verdict: winner
Comment: The Cougars were hit hard by the transfer portal but received good, if somewhat limited news on the draft front. All-conference edge rushers Ron Stone Jr. and Brennan Jackson are returning. Their presence ensures that if the Cougars’ front seven regresses — the linebacking unit was hit hard by attrition — the scope will be limited. 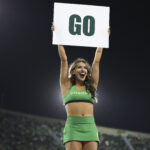