The No. 5 ranked Saguaro Sabercats knocked out the No. 1 Liberty Lions in the Open Semifinals on Friday night. It was nearly four quarters of back-and-forth scoring before the Sabercats found themselves down by two touchdowns in the fourth quarter. With a spot in the Open Division Championship on the line and one minute left on the clock, the Sabercats were trailing 42-35. On 4th and 8, Devon Dampier connected with 2025 wide receiver Mason Whitaker for a touchdown to leave them trailing the Lions by just one point.

As opposed to kicking the extra point and potentially going into overtime the Sabercats opted for a 2-point conversion and successfully completed the play that head Coach Jason Mohns said he’d been holding onto the entire game. 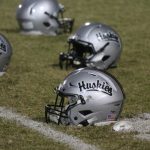