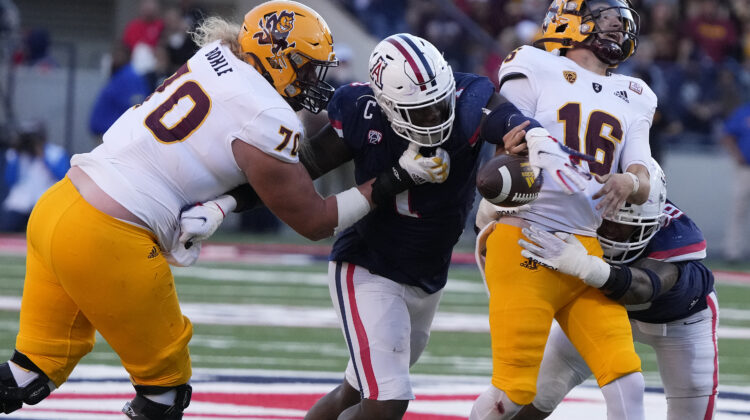 With the early signing period just weeks away, two 2023 recruits from the Valley have decided to plant their roots in the Grand Canyon State following the Territorial Cup. Sirri Kandiyeli (Mountain View) and Taye Brown (Hamilton) have committed to the Sun Devils and Wildcats respectively.

The latest in-state commitment comes from Mountain View’s Sirri Kandiyeli. The 6-foot-3, 270 offensive lineman has the ability to play both center and tackle and was a leader for the Toros in his final season.

The Sun Devils were Kandiyeli’s first-ever offer and he said the program never stopped expressing their interest. Sirri had his sights set on the Sun Devils for quite some time, even in the midst of uncertainty in the program. Now with Kenny Dillingham at head coach and Shaun Aguano staying on staff, Sirri is even more elated about his future with the Sun Devils.

“I’m excited personally about coach Dillingham, he actually made the effort on his first day in to reach out to me and talk to me about ASU and honestly it was one of those things that when I thought about it, it really hit that he was a really great guy. I think he can do great things with time but time will tell. I’m stoked about Aguano being on the coaching staff because he is just a great positive influence from what I’ve seen as well as an exceptional motivator. He is a type of person that I’d love to play under.”

Hamilton linebacker Taye Brown committed to the University of Arizona on Nov. 28, just three days after the Sun Devils fell to the Wildcats in the rivalry matchup. In his final season as a Husky, Taye recorded 47 solo tackles, 91 total tackles, 10 sacks and had two interceptions for Hamilton. The 6-foot-3, 215-pound linebacker goes to the Wildcats with a lot of speed and experience against some of the best high school football teams in Arizona.

Throughout his recruiting process, Taye reached out to his former teammates and current Wildcats Grayson Stovall and Russell “Duece” Davis.

“I’ve asked him about coach Nansen and he says he’s just a great guy. Like there’s times to joke around but he can also be serious and that’s what I like about a coach. I don’t want him to be too serious all the time, I want him to have fun too.”

Taye had offers from seven programs but ultimately found himself deciding between Arizona, Kansas State and San Diego State. The three-star linebacker made an official visit to San Diego State but his plans to visit Kansas State fell through. Brown says his time as a Husky, Hamilton’s coaching staff, his friends and family have all helped him arrive at this decision.

“My coaches have done a really good job of preparing us not just for football but for outside of football. They preach on that, they just try to prepare us for like the real world and how to be. My biggest support is my mom and my dad, I’ve had a lot of conversations with them leading up to my commitment. My whole family, my friends, they’ve always been really supportive with the decisions I’ve made and I’m really thankful to have those people behind me.”

Just one day ahead of ALA Gilbert-North’s semifinals matchup against Lake Havasu, three-star wide receiver Brandon Phelps earned an offer from Arizona State University. Kenny Dillingham hasn’t wasted any time diving into the Arizona high school football recruiting scene, keeping up with the promise he made in his introductory press conference.

“I’ve seen what Coach Dillingham did at Oregon and how he coached and I think he can really impact this reconstruction process for ASU on levels nobody can comprehend yet, I find it exciting, because he has so much experience.”

“ASU and UofA both have given me opportunities to play for them at the next level, and it excited me and I’m ready for new challenges to face and to develop in the sport I love.”

Phelps has had an incredible junior season posting 1,552 receiving yards and 22 receiving touchdowns. The dynamic duo of Adam Damante and Brandon Phelps have led the Eagles into the 4A semifinals as the undisputed top seed in the division. Right now, Phelps’ focus is on playoff football but says he’s excited about his recruitment so far.

“My recruiting process right now is great, I’m having the season of my life, and am excited for what god has in store for my life in these next coming months.”

The 6-foot-5, 230-pound defensive end/defensive tackle was a massive addition to Salpointe Catholic football in the 2022 season. Keona posted 15 solo tackles, 24 total tackles, and 4.5 sacks in his junior season for the Lancers. His offer from the University of Arizona is his very first Division I offer.

Another Local Commit to ASU, First Offers for Freshman QB 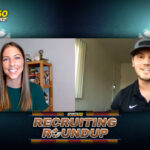