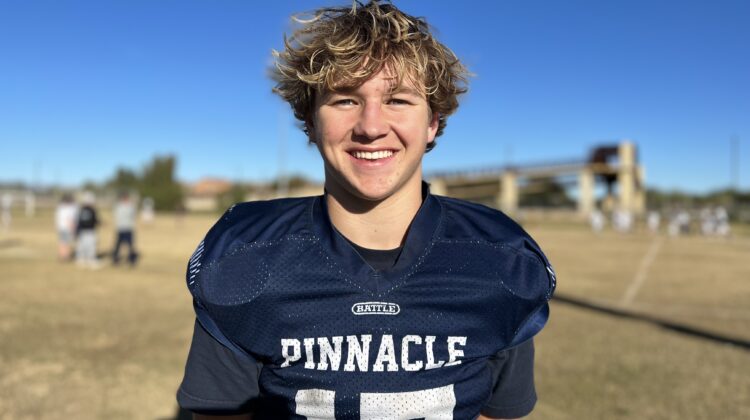 When entrusting sophomore quarterback Wyatt Horton with the keys to the Pioneer offense, Zupke was admittedly hesitant at first.

“Wyatt wasn’t on our radar early on,” Zupke said. “We thought he was gonna be a JV quarterback. We thought maybe he needed another year to develop.”

Horton’s game spoke for itself and there was a change of plans.

Not only was Horton ready for the opportunity – he thrived on it.

“They told me I was gonna be a JV quarterback and I let them know early in the season what my goals were and that I wanted to start varsity and I truly believed that I could,” Horton said. “I put my head down. I didn’t just say it, I showed it, I put in the work in, and here I am.”

After earning that coveted QB1 spot over multiple upperclassmen, he showed his teammates, and the state, what he could do.

“Being a sophomore coming in, especially when I found out I was starting, they welcomed me and got me ready for my job,” Horton said. “I hadn’t really proven anything so I had to come in and prove it to them that I could lead their team. We had a great start to the year…that showed to a lot of guys that I could be their guy.”

He’s done more than proven himself – he’s outdone himself.

Horton has thrown for over 2,500 passing yards and 27 touchdowns while notching over 198 passing yards per game this year (according to MaxPreps).

“He went from not really knowing that he was gonna have to lead this team to being thrown into that position two or three weeks before the season,” Robinson said. “He’s been everything for this team…being able to adapt and overcome all the obstacles he’s overcome has been really cool.”

As the 6A State Championship against Highland approaches this Saturday at Sun Devil Stadium, Horton’s ability to adapt and react could be the difference on gameday.

“What really separates him from a lot of guys is that moxie,” Zupke said. “It’s something that Spencer Rattler has. They manifest it a little bit different but it’s the same thing. He truly believes he’s the best kid on the field and he plays like it.”

Being in the same conversation as someone like Spencer Rattler probably feels good, especially since Horton’s sophomore campaign hasn’t even ended yet.

“Spencer, Brian Lewerke, JD, Devon, Zach, all of them – it’s been the best quarterback school in Arizona,” Horton said. “I’ve been very blessed to follow in their footsteps and I’m just tryna make a name for myself and a legacy when I leave.”

What a night for the @GoBigBlue_PHS offense in their 49-42 win over Casteel – 2025 QB @wyatthorton_2 threw for 5 TD passes, 2023 @Ducerobinson2 with 4 TD receptions and 2023 @myles_lib with a long TD catch and multiple big 3rd Down receptions to move the chains @MHanshaw7 @dzupke pic.twitter.com/dm3Ro9qfxE

Horton’s calm, cool, and collective vibe has left an impression on Pinnacle Football.

A vibe he’s picked up from simply being around the game.

“I’ve always played football,” Horton said. “I’ve always been a quarterback too. I just love that leadership part of it…My oldest brother plays college football in New Hampshire..I got to learn from him a lot. What he did good and also his mistakes. I just took all that as a learning experience and when it was my time, I could capitalize on all that.”

His belief in his coaches, teammates, and himself has helped lead the way to this point and will serve him well in the big game this weekend – and beyond.

“We have the best receiving corps in the state,” Horton said. “I’m very blessed and fortunate to get those guys to throw to.”

He also praised his fellas in the trenches for giving him the time he needs to make those throws.

“Those are my dawgs,” Horton said. “They go to war for me every week.”

And one day, he hopes to follow the footsteps of his brother, Cade, and play collegiate football.

While Horton’s future is exciting, he’s soaking in the present.

“We know they’re gonna be physical and they’re gonna give it everything they got,” Horton said. “If we just play our game and do what we’re coached, it should be a real good fight.”

Pinnacle will take on the defending 6A State Champion in Highland at 1:00 pm on Saturday in Tempe.

Whatever the result is, with Horton in the driver’s seat for the next couple seasons, the Pioneers aren’t going anywhere. 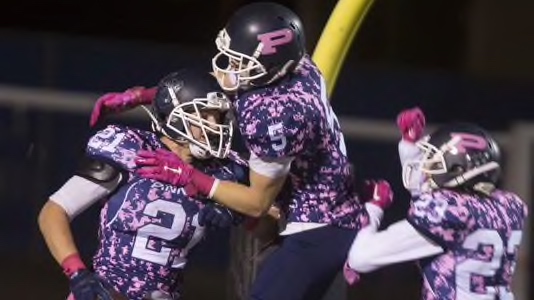 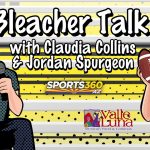