After adding a late touchdown to solidify a 35-o run, Higley knew a state title was inbound. Head Coach Eddy Zubey has been building towards this for 12 years with the Knights. As the final seconds were ticking down, Zubey stared at the field in awe as his players behind him lined up with Gatorade bottles full of ice and water.

Once the clock hit zero, Zubey was soaked in water as the Knights toppled the Cobras, 41-21. The water was cold, but the feelings that Zubey was experiencing were nothing but warm.

“The cold wears off with every hug I receive,” Zubey said after the game. “There’s no better feeling than this. I’m just so proud of how these guys handled themselves this season and tonight especially.”

The victory didn’t come easy. With five minutes remaining in the second quarter, the Knights trailed 21-6.

Higley is one of the highest scoring offenses in the state. Six points wasn’t going to cut it. The defense began making plays late in the first half, and didn’t allow a single score in the second half. That is what allowed the electrifying offense to take over.

This was in the making for sometime. The senior class had only won five total games in the previous three seasons. Once this squad was dropped down to 5A, the young talent on this team knew a state championship was possible.

“In January we knew we had something special brewing,” sophomore quarterback Jamar Malone said. “We’ve been working so hard for this moment. I’m proud we could win this for our seniors, for coach Zubey, and this school.”

Malone is the engine that makes this machine-like offense work. He rushed for two touchdowns, including a 60-yarder on the 2nd play from scrimmage, and threw for two more. Daxen Hall added two rushing touchdowns to the mix as well. 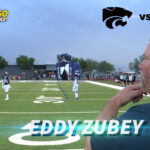