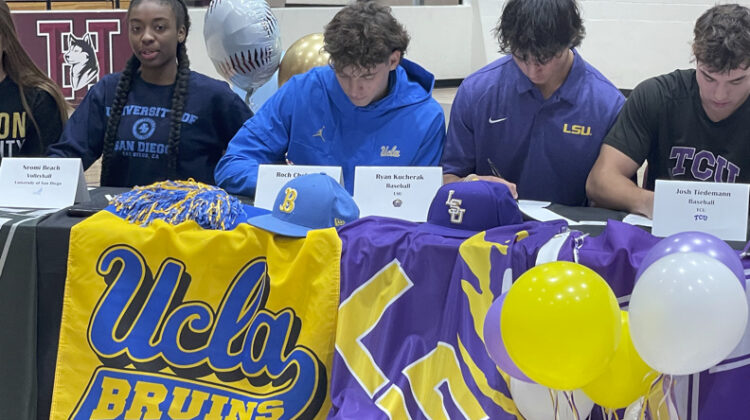 Chandler shortstop Roch Cholowsky made his commitment to play baseball at UCLA official on Nov. 9. The senior star baseball player signed his National Letter of Intent alongside seven of his teammates, all of whom are moving on to play Division I baseball. The 2023 class of signees is the largest to go on to play DI baseball in Hamilton High School history.

Very proud , but just the beginning of the journey. pic.twitter.com/r24YDq3FuE

Roch verbally committed to play baseball at UCLA nearly three years ago but he had aspirations to pursue the possibility of a two-sport college career. In addition to being a key player on the baseball team, Roch has also been the backup and starting quarterback for the football team. However, his decision to play baseball for UCLA was an easy one.

“I’m super excited to finally get it done,” Cholowsky said. “It’s been three years being committed to the Bruins and there’s nowhere else I’d rather call home.”

Extremely honored to announce that I am going to be furthering my academic and athletic career at UCLA. I would like to thank my family, friends, and coaches for everything they have done to get me to this point. GO BRUINS🐻💙💛 @UCLABaseball @UCLA @UCLAAthletics @B_Ward_23 pic.twitter.com/TPerFF486O

The senior quarterback/shortstop is the No. 22 overall baseball prospect in the country and the No. 1 prospect in the state according to Perfect Game. Roch said it was important to him to share the moment he signed his NLI with his teammates. He put pen to paper alongside seven of his teammates from the baseball team that all contributed to the 2022 State Championship win. Roch’s mother, Tika Cholowsky was emotional watching her son finally make his commitment official.

“He committed so young during his freshman year during COVID but it’s always been his dream to go to UCLA,” Tika said. “Throughout the last four years, especially the last few months, he’s had a lot of schools come after him for football as well.”

Tika says he explored every offer but never wavered from his commitment to UCLA. The Cholowsky family has ties to the Bruins, with several family members having attended UCLA and growing up in the area. Roch was born to be a Bruins fan and for as long as he could remember, he had aspirations to play football or baseball at UCLA.

“The coaches always made it feel like family and second that they threw me a good offer I knew it was the right place for me to go.”

The Huskies quarterback played in five football games this season and had a visit planned to Notre Dame with the option to potentially play both sports.

After a couple of conversations with the coaching staff I’m excited to announce I’ve received an offer from the University of Notre Dame to play both football and baseball. @NDFootball @NDBaseball pic.twitter.com/TJljR5QyLF

“It was an honor that he was offered to play both but I think for him he had to look at it and really see if he wanted to put football away,” Tika said. “The last week and a half or two weeks was just a lot of soul-searching and figuring out if he wanted to play football a little bit or baseball.”

The two-sport athlete says that participating in baseball and football helped his ability to become a leader. He emphasized how being a part of a large and hugely successful football team helped influence his ability to lead the baseball team.

Today @CholowskyRoch was among the 8️⃣ baseball players at @HuskyAthletics1 that signed his NLI.

Roch had the option to play football & baseball in college but he & his mother @Tcholowsky said his heart has always been in Los Angeles at @UCLABaseball⚾️ pic.twitter.com/5IVaQxhDcs

“I had a lot of fun in football but my future is in baseball and I think I’m set on that. I mean it was a blessing to get that football offer but I mean there’s nothing else I’d rather do than go play football in LA,” Roch said.

Roch may have another option to weigh when the MLB Draft rolls around in the summer. As the No. 1 overall prospect in the state and one of the top shortstops in the country, he may consider his options to play professionally. Cholowsky’s father played Minor League Baseball for several years and now works as a scout for the Cincinnati Reds.

“We’re not really worried about it. We want him to have a great spring and our goal for him is to go to college and anything above and beyond that if it works towards the draft then that’s fine,” Tika said. “He’s grown up in it his entire life so he knows how tough it is to be in the Minor Leagues and to be a 17-year-old in the Minor Leagues is an extremely tough thing to do.” 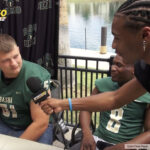