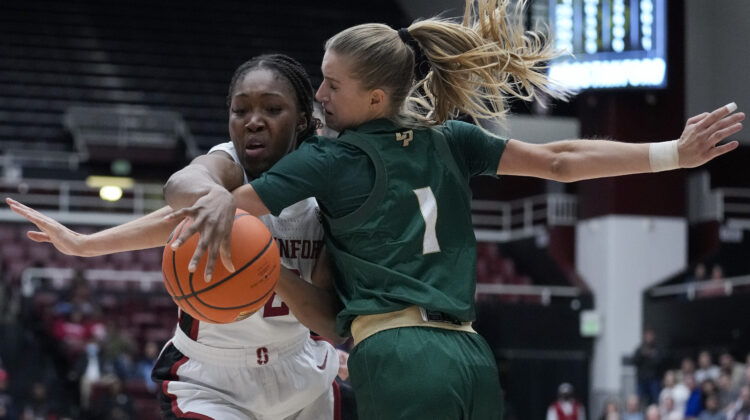 Stanford women’s basketball is a team in a hurry.

The No. 2-ranked Cardinal, which played four games in seven days to open the season, went back to work Wednesday, beating Cal Poly 80-43 Wednesday night in a lead-up to the Sunday home showdown against No. 1 South Carolina in what will be a second rematch since Stanford’s 66-65 win in the 2021 Final Four.

South Carolina rallied to beat the Cardinal 65-61 last December and won the 2022 national title, while Stanford lost to Connecticut in the Final Four.

Stanford was 4-0 last week with an average victory margin of 49 points, becoming the first team nationally to reach four wins. Most importantly, Tara VanDerveer was able to spread minutes around and perhaps settle on freshman Talana Lepolo as a starting guard in place of departed Lexie Hull.

The Cardinal led by 18 points at halftime over South Carolina a year ago, only to lose primarily because it committed 20 turnovers. So far, Lepolo has 26 assists and just seven turnovers, albeit against vastly lesser competition than she will face Sunday. Senior Haley Jones also will be on the ball at times for Stanford in the 63rd meeting between Associated Press No. 1-2 teams.

Overall, Pac-12 teams are a combined 32-1 through Tuesday.

Last week: 2
Results: beat Seattle 90-47, beat Southern 83-46
Next up: vs. Southern Utah (Monday)
NET ranking: No. 13
Comment: The Ducks dropped one spot to No. 21 in the AP poll through no fault of their own, then won in a third blowout Monday. Grace VanSlooten, a 6-foot-3 forward, is Pac-12 Freshman of the Week, averaging 18 points in her first two games and leading all scorers in both.

Last week: 3
Results: beat Northern Arizona 113-56, beat Cal State Northridge 87-47
Next up: vs. Loyola Marymount (Thursday)
NET ranking: No. 22
Comment: The Wildcats made a one-spot gain to No. 18 in the AP rankings, led by West Virginia transfer Esmery Martinez averaging a double-double (17.5 points, 10 rebounds) and a 100-point team average (No. 4 nationally through Monday). The 6-foot-2 Martinez was all-Big 12 as a sophomore (first team) and junior (second).

Last week: 4
Results: beat Utah Valley 97-27, beat Southeastern Louisiana 99-62
Next up: vs. Oklahoma (Wednesday)
NET ranking: No. 28
Comment: Utah and UCLA were positioned in the AP preseason poll for a quick jump into the top 25. The Utes made it to No. 25 with three commanding wins (44-point average), setting up the second-highest-profile Pac-12 game this week vs. No. 16 Oklahoma, which beat BYU on Tuesday. The Utes go into that one averaging 94.6 ppg (No. 8 nationally).

Last week: 5
Results: beat UC Riverside 64-43, beat Troy 95-83
Next up: vs. South Dakota State in Bahamas (Saturday)
NET ranking: No. 41
Comment: The Bruins sit first outside the AP top 25 thanks to a career-best start by Charisma Osborne, who’s averaging 20.3 points and 10.7 rebounds, and guard Gina Conti joining the starting lineup. The Bruins next play South Dakota State for the third time in two seasons, including in the 2022 WNIT semifinals.

Last week: 6
Results: beat USF 69-63, beat Prairie View A&M 89-61
Next up: vs. BYU (Friday)
NET ranking: No. 59
Comment: Charlisse Leger-Walker had a legendary game against USF, scoring 26 of her career-high 35 in the second half as the Cougars overcame a 15-point halftime deficit on the road. The junior guard was rewarded with Pac-12 Player of the Week honors after adding another 24 points against Prairie View.

Last week: 7
Results: beat Seattle 89-53
Next up: vs. Eastern Washington (Thursday)
NET ranking: No. 50
Comment: The Beavers won comfortably over Seattle in their second game after edging Hawaii by a point in their opener. They have a pair of winnable dates this week before a major challenge against No. 4 Iowa, Nov. 25 in Portland.

Last week: 10
Results: beat Grambling State 62-49, beat Montana State 79-64
Next up: at New Mexico (Sunday)
NET ranking: No. 49
Comment: ASU made an early-season statement at Big Sky favorite Montana State, leading 20-0 and not letting the Bobcats closer than 14 in the second half. Transfers Tyi Skinner (from Delaware) and Treasure Hunt (Kentucky) combined with returner Jaddan Simmons are a solid offensive trio.

Last week: 9
Results: beat Idaho State 75-42, beat San Diego 58-50
Next up: at USF (Saturday)
NET ranking: No. 74
Comment: The big news Tuesday for USC wasn’t its narrow win over San Diego but the signing of 6-foot- guard JuJu Watkins, the 2022 MaxPreps national Player of the Year as a junior at nearby Sierra Canyon High School. Short term, the Trojans drop one spot in Hotline ratings behind ASU.

Last week: 12
Results: lost to Notre Dame 90-79
Next up: vs. Idaho (Wednesday)
NET ranking: No. 90
Comment: The Bears earned a one-place bump in Hotline ratings by playing tough late into the fourth quarter against  No. 9 Notre Dame, the highest-profile Pac-12 opponent in the opening week. Jayda Curry scored 24 but didn’t have enough offensive help for Cal to pull a major upset.

Last week: 11
Results: beat UC Davis 82-60
Next up: vs. UC Irvine (Thursday)
NET ranking: No. 94
Comment: The Huskies’ non-conference schedule, like ASU’s, is properly built for growth and to create success ahead of rugged Pac-12 play starting in December. Five players are averaging double-figure scoring led by Haley Van Dyke. 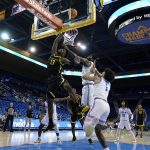 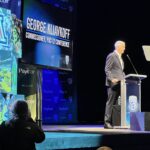