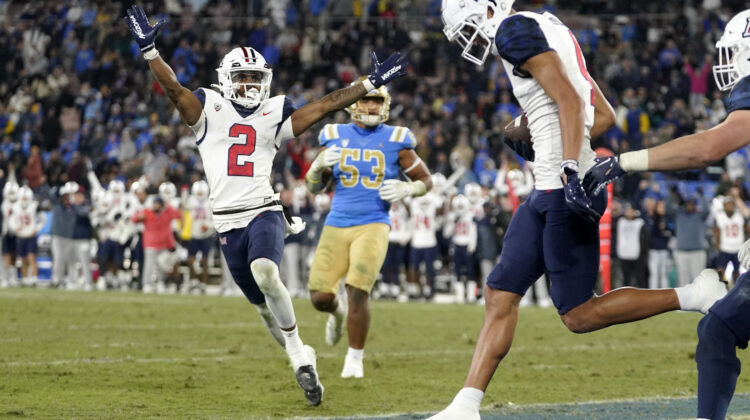 Theme of the week I: CFP derailment

Three College Football Playoff contenders entered the 11th week of the season and one survived: USC is the only team with one loss and therefore the only team capable of ending the Pac-12’s playoff drought. The upset victims, UCLA and Oregon, have been eliminated. According to the Associated Press, the twin defeats marked the first time since 2014 that two Pac-12 teams ranked in the top 10 lost at home on the same weekend. (Back then, it was also Oregon and UCLA.)

Washington’s victory at Oregon vaulted the Huskies into the conference title chase, along with USC, Oregon, Utah and USC. The Trojans will clinch a berth in the Dec. 2 championship with a victory Saturday in the Rose Bowl. In our view, the Pac-12 couldn’t have picked a better year to dump the divisions and open the title game to the teams with the highest winning percentage.

Theme of the postseason: Into the wormhole

While pondering the Pac-12 championship game tiebreaker scenarios late Saturday night, the Hotline realized that surprisingly few upsets are required for the Pac-12 race to end in a five-way tie. For your reading enjoyment, if …

… then all five contenders would finish 7-2. How would the tiebreaker unfold? At this point, we prefer lighter reading, like Ulysses.

One of the most anticipated games of the conference season easily surpassed expectations with 45 points in the second half, big plays, huge mistakes and an edge-of-the-seat finish. The TV ratings will be released in several days, and we expect the latest installment in this terrific rivalry to approach three million viewers. Also, the uniforms were fantastic. The conference should: Allow the schools to wear their colors every year (Oregon yellow and UW purple);  schedule the game on the same Saturday; and give both teams a bye the week before to let the players heal and the hype build.

Game of the year: TBA

The Hotline put a poll in the field last night — to borrow a term from election season — and asked our Twitter followers to vote for the Pac-12 game of the year (thus far): either Utah-USC or Oregon-Washington. With about 2,500 responses, the thriller in Eugene has 69.3 percent of the vote, the Salt Lake City slugfest 30.7 percent. I’m sure recency bias is at play, and both were terrific. Our vote, without a moment’s hesitation: Utah-USC was better.

Chalk, chalk, chalk — for weeks, the heavy favorites handled their business across the Pac-12. Then Arizona, playing on the road a week after getting thrashed at Utah, went into the Rose Bowl as a 20-point underdog and took down the one-loss Bruins. In our humble opinion, it was the most significant win for the Wildcats since they beat No. 15 Washington State to become bowl-eligible midway through the 2017 season.

Team of the week: Washington

In addition to toppling their rival for just the third time in the past 18 meetings … and beating a quality Pac-12 opponent on the road for the first time since the 2018 Apple Cup … and ending Oregon’s playoff hopes … and snuffing out Oregon’s 23-game home winning streak … the Huskies catapulted themselves into the Pac-12 race. If UW had just beaten Arizona State (3-7), it would be in the playoff race.

Victory of the week: Washington State

For all the focus on Washington and Arizona, let’s not forget that Washington State became bowl-eligible for the seventh consecutive season (2020 excluded) with its 28-18 victory over Arizona State. For a program that must function with tighter resources than many of its peers, that’s a stellar accomplishment. And the postseason bid will only add momentum on the recruiting trail for second-year coach Jake Dickert.

To understand the next-level nature of Arizona’s victory, consider that Fisch entered the game with a 4-17 record over his first two seasons and had beaten the following teams: Cal, Colorado, San Diego State and North Dakota State. Note, too, that Arizona’s five losses in conference play this season had come by an average of 17.6 points. And yet one week after facing the battering ram known as Utah, with his team on the brink of bowl elimination, Fisch conjured a breakthrough performance.

Sure, the lefthanded howitzer has had better games statistically, made a massive gaffe with the interception near the goal-line and was facing a less-than-granite defense. But combine the stakes, the environment and his response to the interception — a 62-yard cruise missile down the left sideline — and Penix was at his best when his best was required. In other words: competitive greatness, the top block in John Wooden’s pyramid of success.

The fifth-year senior had one sack and 1.5 tackles-for-loss — not necessarily eye-popping numbers. But Harris stands here as a proxy for the Wildcats’ entire defensive front, which was phenomenal against the powerhouse UCLA offense. Arizona pressured Dorian Thompson-Robinson just enough (sometimes without a blitz) to disrupt his rhythm at crucial moments.

We have criticized Arizona’s defensive performance frequently this season — how could you not? — but give credit to Nansen for becoming the first defensive playcaller to hold UCLA under 30 points. The fact that Nansen was on the Bruins’ staff last season, as the defensive line coach, might have given him a teeny-tiny bit of insight.

On the whole, we like Lanning’s aggressive style and the energy it brings. But he went too far in the final minutes Saturday night, and it cost the Ducks a shot at the playoff. The rookie head coach plunged into a high-risk situation on fourth-and-1 at the 34 yard-line — his own 34 yard-line — when Oregon clearly should have called timeout, assessed the situation and gotten starting quarterback Bo Nix back in the game. In that situation, you cannot rush.

Whiff of the decade: Stanford and Cal

With the transfer portal, NIL and the ever-increasing premium placed on institutional commitment to football, the Bay Area teams are losing ground as rapidly as they are losing games. Yes, sure: The coaching has left much to be desired. But neither program has any chance to attain consistent success in the current environment without systemic changes that require approval at the highest levels.

Stat of the week I: Utah

The stretch run is here, and look who has become a major contributor once again: Tavion Thomas. The first-team all-conference tailback (in 2021) had dropped down the depth chart earlier in the season but rushed for a career-high 180 yards against Stanford. Next, Thomas faces the opponent (Oregon) he scored five touchdowns against in two games last season.

Stat of the week II: USC

Friday feels like forever ago, but we should acknowledge the only one-loss team in the conference and its 55-17 victory over Colorado. However, our mention comes with faint praise given that the Trojans have not played UCLA, Washington or Oregon, lost at Utah and barely beat Oregon State. In fact, their seven Pac-12 wins are against middleweights and bottom-feeders with a combined conference record of … wait for it … 14-36.

Stat of the month: Stanford

The Cardinal has lost six consecutive November games (four last season, two this season) by an average of 33.3 points per game. Not once has it scored more than 14 points or given up fewer than 35.

Stat of the year I: Bowl math

Seven teams are eligible: Washington, Washington State, Oregon, Oregon State, USC, UCLA and Utah. Four teams are eliminated: ASU, Cal, Colorado and Stanford. One team is in limbo: Arizona. The Wildcats (4-6) must beat WSU and ASU (in Tucson) to clinch a berth.

The Beavers quietly improved to 7-3 overall and 4-3 in conference play. But from the department of oh-so-close, consider: They lost by three points to USC and Washington. Swap those six points, and the Beavers would be churning toward a berth in the conference championship.

Stat of the decade: Cal

With a 38-10 loss at Oregon State in which they scored zero offensive touchdowns, the Bears once again failed to win outside the Bay Area. Their last such success was the final game of the 2019 season (at UCLA).

Game of next week: USC at UCLA

The crosstown showdown has implications for the Heisman Trophy, the conference championship game and the playoff race — it’s like a trip through time to the era when USC and UCLA took advantage of their inherent advantages and dominated the conference. Not surprisingly, Fox grabbed the game for its primetime (5 p.m.) broadcast while Utah at Oregon, which could prove the better game, gets the 7:30 p.m. window on ESPN. 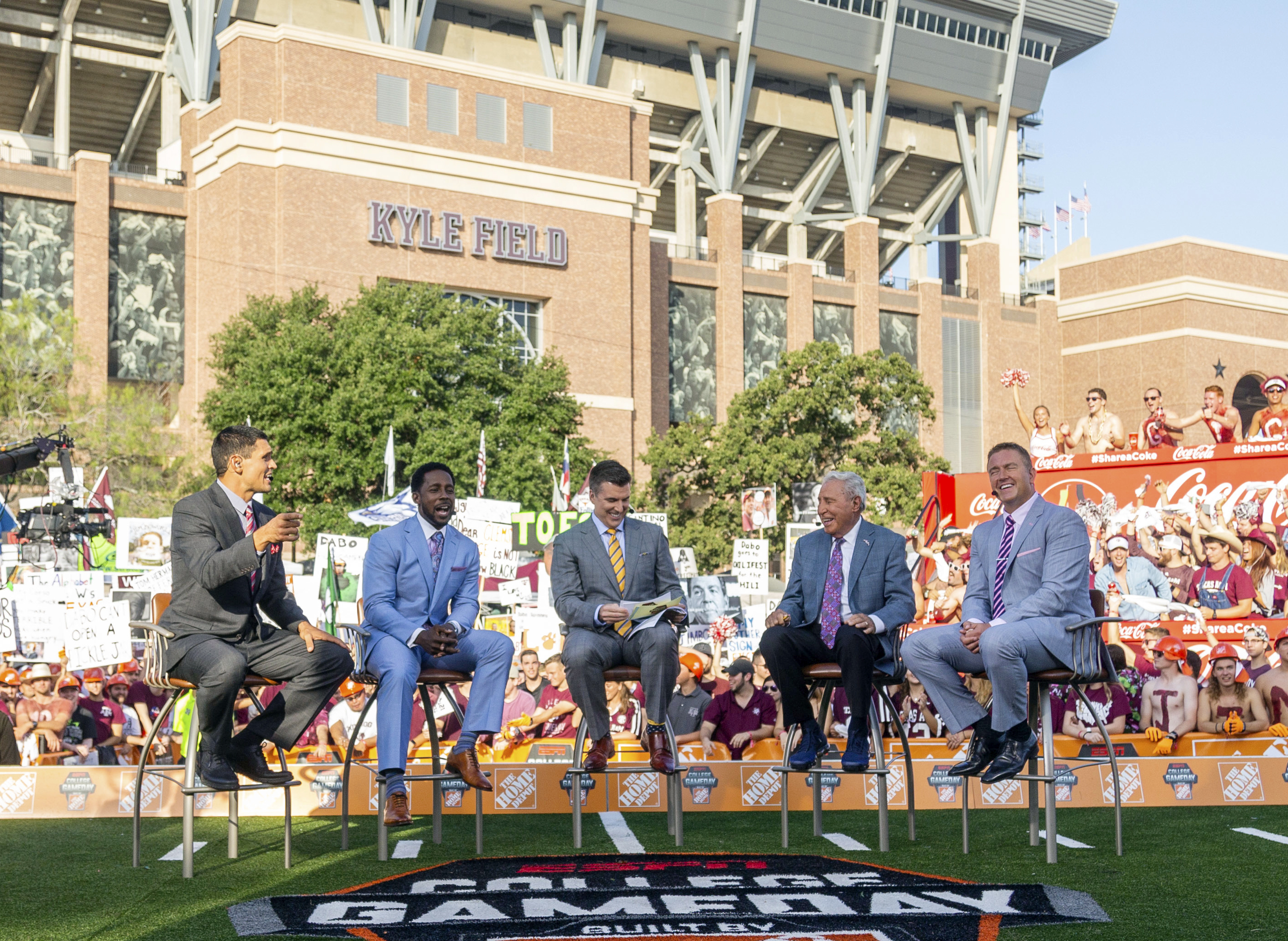