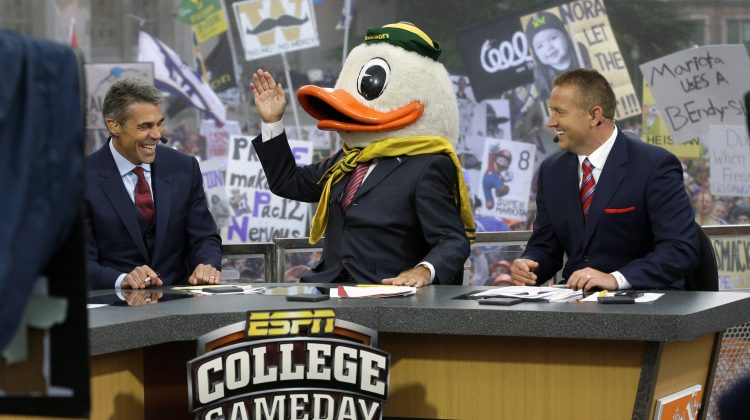 The Hotline is forever in search of context. This week, we found a pile hidden in plain sight.

The rise and fall of the Pac-12 through its expansion era tracks with the number of campus appearances by ESPN’s ‘College GameDay.’

Saturday, ‘GameDay’ will broadcast live from Eugene, where No. 10 Oregon hosts No. 9 UCLA in a showdown oozing implications — for the conference race, for the playoff chase and perhaps for the Heisman Trophy campaign.

But examine the ‘GameDay’ history within the Pac-12 footprint since the conference expanded in 2011 and you’ll notice a distinct pattern.

The show made regular appearances for six years, a stretch that coincided with a barrage of 10-win seasons and top-25 rankings for the conference, plus two playoff berths.

But in the past five years, as the Pac-12 faded from relevance, ‘GameDay’ became an infrequent visitor to the West Coast.

Appearances by year (with campus):

We’re slightly skeptical of another visit to the West Coast this season, not because of a paucity of quality matchups but because of the locations.

The Washington-Oregon and Utah-Oregon games could be candidates, but both are in Eugene and ‘GameDay’ doesn’t typically make two appearances on the same campus.

That seemingly leaves just one option: The USC-UCLA showdown, which falls on Nov. 19 — the weekend before Ohio State-Michigan.

This is the lightest weekend of the season, with just four games: USC, Arizona, Utah and Washington State are idle.

Once Week Eight comes to a close, only two teams will have byes to take down the stretch: Oregon State and Washington. They are idle on Oct. 28, then collide in Seattle on the first Friday of November.

The light lineup this weekend leaves the conference with just two games on major networks: Oregon-UCLA is on Fox at 12:30 p.m., while Washington-Cal will be on ESPN in the night window. The other two games are on the Pac-12 Networks.

Only eight teams are on the field, yet three have quarterback situations worth monitoring:

— Colorado will make a game-time decision on freshman Owen McCown, who was reportedly “dinged up” against Cal and left the game in the second half. His replacement, JT Shrout, threw the winning touchdown pass in overtime and will be available if McCown isn’t ready.

— Arizona State is expected to start Emory Jones, who has cleared concussion protocol following a hit two weeks ago in the victory over Washington. If he struggles, the Sun Devils will turn to Trenton Bourguet, who tossed three touchdowns against UW.

— Oregon State is expected to start freshman Ben Gulbranson for the third consecutive game as first-stringer Chance Nolan remains in concussion protocol. Gulbranson is 2-0 as a starter, with wins over Stanford and Washington State.

We have become accustomed to Pac-12 coaches getting fired in the middle of the season, but Cal took the opposite approach this week.

The Bears coaxed Steve Greatwood out of retirement. The longtime Pac-12 assistant will serve as an analyst and work to revive Cal’s woeful play along the offensive line.

Greatwood is quite familiar with the school and the assignment, having coached the position for decades at Oregon and Cal. Essentially, he’s answering coach Justin Wilcox’s plea for help.

The Bears have been awful on offense, with 22 points (combined) against Washington State and Colorado, and the floundering line is a chief reason.

Our suspicion is that Greatwood’s influence will be felt immediately despite the analyst role.

— Oregon, Oregon State and Washington become bowl-eligible with victories this weekend. USC and UCLA have already reached the six-win threshold.

— ASU’s last victory at Stanford was in 2007, the first year of the Jim Harbaugh era.

— Cal has won six consecutive home games, its longest streak since the heyday of the Jeff Tedford era in the 2000s.

— Oregon’s 22-game home winning streak is the third-longest in the FBS. The Ducks haven’t lost in Autzen Stadium since 2018 (Stanford).

— And finally: UCLA’s last road victory over a top-10 team in conference play was in 1990, when the Bruins beat Washington.

Wilner Hotline – Stock Up, Stock Down in Pac-12 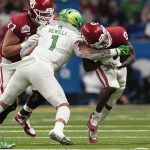