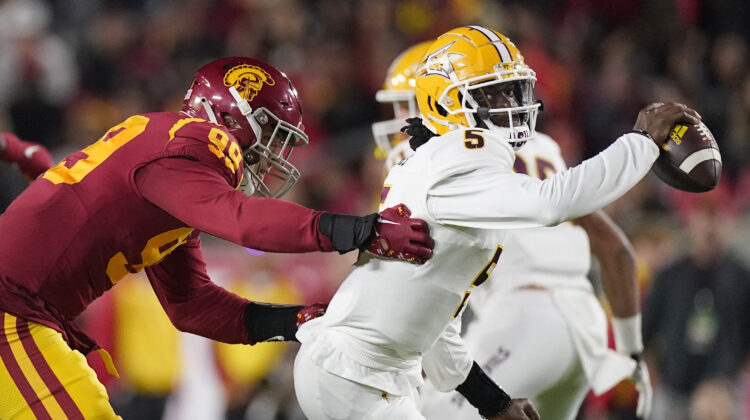 The numbers don’t lie, but do they exaggerate?

They are the only undefeated teams left in the Pac-12. The Trojans will be in the AP top-10 again next week, and the Bruins should enter the poll.

And yet, the resumes still feel flimsy. Let’s examine the opponents.

— Bowling Green, a Mid-American Conference team that lost to Eastern Kentucky.
— Alabama State, an FBS team that lost to Prairie View.
— South Alabama, a Sun Belt team that had the Bruins on the ropes
— Colorado, the worst team in the Power Five
— Washington, which is better than average but not close to elite.

— Rice, which is Rice
— Stanford, which hasn’t beaten an FBS team in 364 days
— Fresno State, one of the better teams in a weak Mountain West
— Oregon State, which just got walloped at Utah
— Arizona State, which is winless against FBS teams

That’s 10 games between them, and not much meat.

The Hotline believes the Bruins and Trojans are good enough to win nine games, especially with their favorable schedules:

The Bruins have eight home games and play just one of the Pac-12’s top teams on the road (Oregon),

The Trojans have seven home games and don’t face Oregon or Washington.

Consider us slightly skeptical about either team reaching the next level, which we’ll define as 10 or more wins, a conference championship appearance and a serious run at the College Football Playoff.

We could become convinced but need to see more from both.

Fortunately, clarity is on the way.

The Trojans host Washington State next weekend, then visit Utah.

The Bruins host Utah next weekend, then (after a bye) visit Oregon.

By the close of business on Oct. 22, we’ll know whether the L.A. teams are next-level good or just better than they have been.

And there’s absolutely nothing wrong with the latter.

Results in other leagues have added context to the Pac-12’s early-season ledger, and it’s not the prettiest of pictures.

Washington State’s win at Wisconsin doesn’t seem quite as impressive. The Badgers are 0-2 in the Big Ten after losing at home to Illinois (by 24 points).

Utah’s loss at Florida has taken a darker tint. The Gators are 0-2 in the SEC.

Washington’s win over Michigan State has lost its luster. The Spartans are 0-2 in the Big Ten after lopsided losses to Minnesota and Maryland (not to be confused with Michigan and Ohio State).

Also, what once appeared to be quality wins over the Mountain West should be reconsidered.

Fresno State just lost to Connecticut — a bad result, even without quarterback Jake Haener — and both Boise State and San Diego State are in reset seasons.

While the context cited above is important, the wins matter most. And the Pac-12 should once again have four teams in the AP poll (USC, UCLA, Utah and Oregon), plus two others with 4-1 records.

The conference remains well positioned to send at least seven and perhaps nine teams to the postseason.

It’s a zero-sum game, after all. With three teams that are headed nowhere (Colorado, Stanford and ASU), there are gobs of wins available for everyone else.

For example, Oregon State is 3-2 (halfway to bowl eligibility) after back-to-back losses to USC and Utah. But the Beavers are closer to the postseason than it appears because they play all three of the bottom feeders.

The last time the Pac-12 produced nine bowl-eligible teams was 2017, which happened to be the last time there were three bad teams: Oregon State was 0-9 in conference play, while Cal and Colorado were 2-7.

Strong tops and wide middles are only attainable if there’s a big bottom.

Another lopsided loss by Colorado (43-20, at Arizona) has the Hotline on alert for yet another in-season firing.

Will the CU administration dismiss third-year coach Karl Dorrell, whose team is 0-5 and has not been within three touchdowns of a victory?

The next 48 hours provide a time to act.

With the Buffaloes idle next weekend, an interim coach would have several days to settle in before preparations ramp up for the Oct. 15 home game against Cal.

We believe it’s also possible that Dorrell remains in place for the duration of the season but staff changes are announced next week (assistants and coordinator), especially on the defensive side.

Late Saturday night, the Hotline published (on Twitter) an insider’s assessment of the conference hierarchy.

For fun, we described the teams without using their actual names.

See if you can guess who’s who:

The teams above USC are, in order: Utah, Oregon, Washington State and UCLA.

The teams below USC are, in order: Washington, Oregon State, Arizona, Cal, ASU, Stanford and Colorado

Brock Huard Weighs In On Monster Saturday For Pac-12