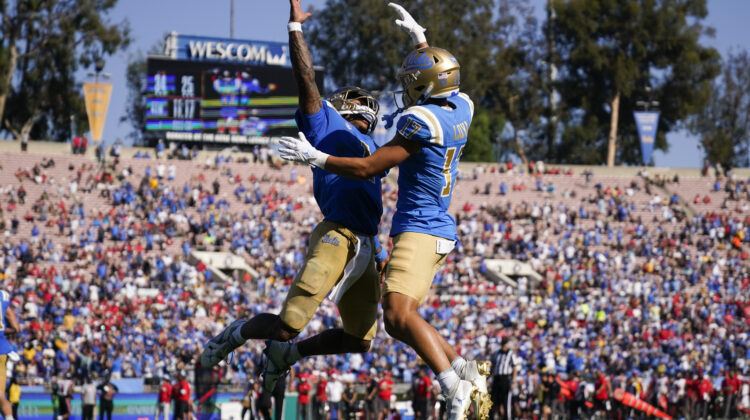 Top storyline I: Return to reLAvance

With competent coaching at USC, a veteran roster at UCLA and stellar quarterback play on both campuses, the crosstown rivals reached 6-0 in the same season for the first time since 2005. Our view: It doesn’t matter a lick that the uptick is coming months after their announced departures for the Big Ten. The move isn’t responsible for their success in any fashion, and they aren’t leaving for 21 months. What matters is the Trojans and Bruins have helped the Pac-12 regain a footing on the national stage.

Arizona State’s Herm Edwards and Colorado’s Karl Dorrell didn’t last until the midpoint of the middle month, thus bringing to five the number of Pac-12 in-season coaching dismissals since the start of 2021. Neither move came as a surprise: The Buffs were winless and lifeless under Dorrell, while Edwards’ tenure in Tempe lasted much longer than it should have given the NCAA investigation. (If we’re being honest, it shouldn’t have ever started.) We do not expect additional terminations over the next six weeks.

A surge in scoring has fueled the conference’s overall resurgence. 19 FBS teams are averaging at least 40 points per game, and five reside in the Pac-12: Washington, Oregon, USC, UCLA, and Utah. We expect production to decrease with conference play in full swing, but the Pac-12 is nonetheless on pace to generate more high-level offense than it has in eons. It’s amazing what quality coaching and quarterback play can do.

The list of impact players is stocked with newcomers. The influx of starting quarterbacks (seven) has been well-documented. Still, the transfer portal delivered playmakers across the rosters, from Washington tailback Wayne Taulapapa to Arizona receiver Jacob Cowing, from UCLA edge Latu Laiatu to Oregon cornerback Christian Gonzalez, and from USC linebacker Eric Gentry to ASU tailback X Valladay. More than a few are intra-conference transfers.

We debated whether to honor Kelly because the Bruins’ schedule has been pillowy-soft. But he deserves credit for having the Pac-12’s last remaining unbeaten team, developing quarterback Dorian Thompson-Robinson and collecting pieces through the transfer portal that fit perfectly within his system. No offense is better designed, and the defense has improved. Runners up: Oregon State’s Jonathan Smith, USC’s Lincoln Riley and Washington’s Kalen DeBoer.

We seriously considered a handful of quarterbacks, but Cowing has performed at the highest level nationally relative to his position and done so against solid competition. He’s in the top 10 in a slew of key statistical measures and has created chances for teammates because of the attention he draws. Runners up: UCLA QB Dorian Thompson-Robinson, USC QB Caleb Williams, Washington QB Michale Penix Jr., Oregon OT T.J. Bass and Utah TE Dalton Kincaid.

The sophomore has been an unstoppable force up front, leading not only the conference but the country in sacks (seven) and ranking second nationally in tackles-for-loss (12.5). USC’s defense has been both wobbly and better than expected, and the improvement starts with Tuipulotu, a worthy heir to the likes of past USC stars Shaun Cody, Mike Patterson and Leonard Williams. Runners up: Utah cornerback Clark Phillips III, Oregon cornerback Christian Gonzalez, UCLA edge Laiatu Latu, Oregon State cornerback Rejzohn Wright and Washington State linebacker Daiyan Henley

Largely because of transfers like Penix, Williams and Oregon’s Bo Nix, the level of quarterback play across the conference is higher than it has been in years. Sure, coaching plays a key role, but it’s a talented, experienced collection that has thrived where its predecessors flopped. Put another way: A potential first-round pick in the 2023 NFL Draft, Stanford’s Tanner McKee, is merely seventh in the Pac-12 in efficiency rating.

The most anticipated conference game of the first half delivered on the hype, and then some. The showdown proved plenty worthy of its prime-time TV window with big plays, huge momentum swings, more than 1,000 yards of offense and a riveting finish. Add the officiating controversy, and it checked all the boxes for gripping entertainment.

What if we told you the Pac-12 would record victories over Notre Dame (road), Wisconsin (road) and Michigan State (home) — and none of them packed a punch? Welp, check the standings: MSU and Wisconsin are each 1-3 in Big Ten play, and the Irish (3-3) lost at home to Marshall. Which leaves us with the following offering for the Pac-12’s best non-conference win: UCLA over South Alabama.

Worse than expected I: Cal’s offense

The bar is never high for the Bears, yet they have still managed to underperform under playcaller Bill Musgrave. The past two games have been particularly dreadful with nine points against Washington State and 13 against lowly Colorado.

A unit that returned only one all-conference-team selection (Ron Stone Jr.) has been consistently effective, leads the conference in tackles-for-loss and allows just 20.7 points per game. Its greatest challenge has been the erratic support from WSU’s offense.

No, it couldn’t have been any worse under the new coaching staff than it was last year (completely inept), but we didn’t expect quite as many points (42.1) or yards (513.1) per game from the Huskies. Often, the receivers are wide open, a credit to the scheme deployed by DeBoer and Co.

New coordinator Trent Bray has arguably the best secondary in the conference and is making the most of it: The Beavers held USC to 17 points and are even better than the 24.7 points-per-game allowed given that their quarterbacks have thrown 11 interceptions.

A daunting assignment for the Ducks went unimaginably wrong as they trailed the defending national champs 28-3 at halftime and never mustered a rally. The final result and lasting image could haunt the Pac-12 during the playoff selection process, especially if the Ducks end up as a one-loss conference champion.

For the first time in years, the Pac-12 is a top-heavy league — a necessity for prime-time matchups, national recognition and playoff consideration. Four teams are ranked in the top 15 of the current Associated Press poll (No. 9 UCLA, No. 10 Oregon, No. 12 USC and No. 15 Utah). That’s more than any conference except the SEC, which also has four.

USC’s Williams is the No. 3 betting favorite at 7-to-1 while UCLA’s Thompson-Robinson is 20-to-1 with a golden opportunity to gain ground this weekend (at Oregon). The success of the L.A. QBs evokes memories of 1988, when USC’s Rodney Peete finished second in the Heisman voting and UCLA’s Troy Aikman was third. (The winner? Some guy named Barry Sanders.)

Two teams are already eligible (USC and UCLA), four are within one victory of qualifying (Oregon, OSU, Washington and Utah) and one has a reasonable path to the postseason (WSU). What’s more, the conference remains alive in the playoff chase — an improvement! — and is better positioned for multiple berths in the New Year’s Six than it has been in years. The second half should be riveting. 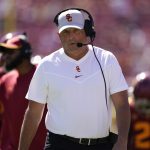 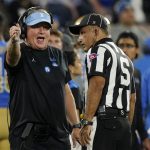