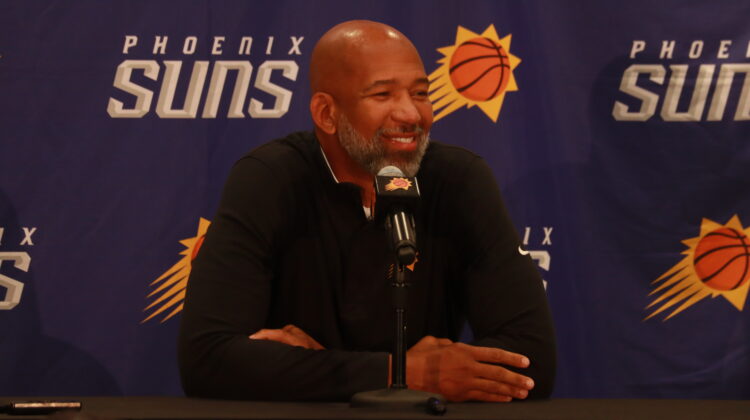 Yes, the NBA season is right around the corner. The Suns will open up on October 19 at home against the Dallas Mavericks.

That’s one storyline to follow after Dallas thwarted Phoenix in Game 7 of the Western Conference semifinals last year.

At today’s media day there were plenty of storylines for General Manager James Jones, head coach Monty Williams, and Suns players to discuss.

The first question to everyone at Suns Media Day was about Robert Sarver, and how they felt after the 40+ page report came out along with a one year suspension for Sarver.

Since then, they’ve all had time to reflect on what they were reading and hearing.

Once Sarver announced his plans to sell the team, there was some sense of relief, but also a feeling that they don’t want to just focus on basketball this season.

“I think I’m in agreement with selling the team,” Jones said. “I think that’s the best outcome for everyone involved. The players, the fans, the staffers, everyone that was impacted on so many levels. It brings some closure to a long period of discomfort and uneasiness.”

Jones also pointed out numerous times that this outcome will allow the Suns to continue raising the standards that they want to hold everybody to within the organization.

Monty Williams echoed a similar sentiment to Jones. He also said that he did a lot of listening to his players because he felt that was the best way for him to help during the emotional rollercoaster of this process.

Here's the full video & quote from this.

This is why Monty is one of the most respected coaches and people in the league. https://t.co/7k2jmW5QFc pic.twitter.com/Q7tNTxMwUi

Players like Chris Paul, Devin Booker, Deandre Anyton, and so on, all said that Sarver’s actions are unacceptable and they want to make sure that anyone effected by him is taken care of.

Yesterday, it was announced by the Suns and Jae Crowder that he would not be attending training camp while both sides look for a trade partner.

Crowder has been a key part to this organization’s success the past two seasons, but as mostly everybody said at media day, this is part of the business.

“What I do know is everyone has to do what’s best for them,” Paul said. “I’m always going to support anyone of my teammates, especially somebody like Jae who is a huge reason we were successful the past two years.”

Cam Johnson is entering his fourth year in the laegue. After big steps forward the last two seasons, he’s ready to be an everyday starter. Crowder helped him learn a lot about the league.

Despite all of the Kevin Durant trade rumors this offseason, the core of this team is still together.

Booker signed a supermax extension worth $224 million over four seasons. Ayton agreed to a 4-year, $133 million deal with the Pacers, which was immediately matched by the Suns.

Ayton spoke very shortly on Monday, saying “I was happy” when asked about the contract. He wasn’t super energized in his presser, but many are taking that as a sign that he’s just dialed in and ready to take the next step.

A Little Bit of Fun

It wasn’t all serious on media day. Paul’s kids were in attendance. Mikal Bridges and Cam Payne goofed off. Summer stories were shared. And mic issues were experienced.

Watch some of the fun moments below.

Now that media day is over, the Suns will have a team meeting tonight before the start of training camp. 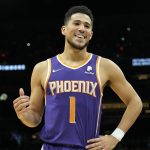 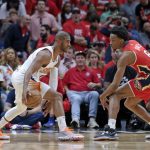