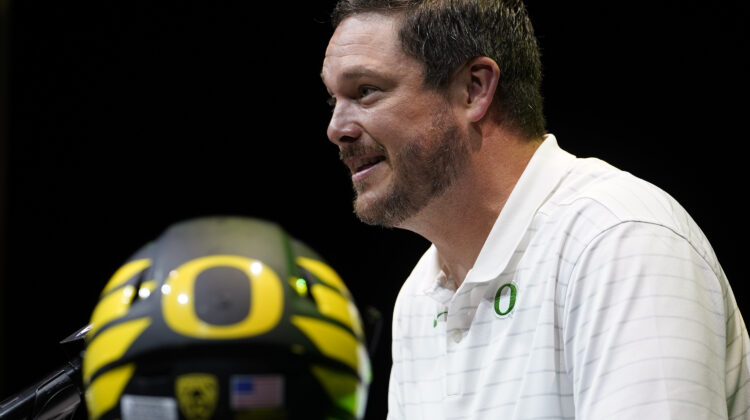 The Pac-12 couldn’t have asked for much more on the third and final weekend of the non-conference season.

We’ll get to the collective performance momentarily, but let’s start with the marquee, back-to-back victories by the bitter rivals along I-5: Oregon thumped No. 12 Brigham Young 41-20, then Washington hammered No. 11 Michigan State 39-28.

The show of force by the Pacific Northwest powers marked the first time the Pac-12 has recorded two non-conference wins over ranked teams on the same Saturday since Sept. 14, 2013, when ASU took down Wisconsin and UCLA beat Nebraska.

With first-year coaches seeking signature wins, transfer quarterbacks playing at a high level and swarming defenses, the Ducks and Huskies were equally dominant in benchmark games.

It’s far too early for grand pronouncements, but it appears both are positioned for successful years.

Care to guess the last time Washington and Oregon were good … really good … in the same season? Back in 2000, when they finished in a three-way tie (with Oregon State) for the conference title.

That’s good for the Pac-12. The conference is best when its top brands are winning, and as of this moment, it sure looks like the top three football programs (USC, Oregon and Washington) are relevant regionally and nationally.

They aren’t the only ones. We won’t ignore Utah, the defending champions, or the undefeated trio of Oregon State, Washington State and UCLA.

But just like the Big Ten is best when Ohio State, Michigan and Penn State are elite, the Pac-12’s image shines brightest when its traditional powers are good.

The conference needed Washington and Oregon to show well today, in back-to-back games against ranked opponents on network television. And both delivered.

It was a reminder, too, that if the Ducks and Huskies stick around, Pac-12 football isn’t destined for the wilderness once USC and UCLA leave for the Big Ten.

Yes, we’re going there. Why? Because for now, the math demands it.

Let’s address Washington’s situation first. Even though the Huskies were unranked to start the season, their College Football Playoff formula is no different than Utah’s formula or USC’s formula (or Washington State’s or Oregon State’s, for that matter).

Any team that wins the Pac-12 title and finishes the season with a 13-0 or 12-1 record must be considered a playoff candidate. And if that team’s resume includes a victory over a ranked non-conference opponent, its prospects are even better.

Of course, the trick is the 13-0 or 12-1 piece, and we’re hardly convinced the Huskies have what it takes to clear that bar. The same goes for WSU and OSU — neither team has the personnel to come close to 13-0 or 12-1.

From our vantage point, USC owns the best shot of ending the Pac-12’s six-year playoff drought. The Trojans possess the talent and, unlike Utah, have the necessary margin for error. The Utes cannot lose again because of the stumble at Florida, whereas USC can afford a loss in league play (but would need to beat Notre Dame).

Oregon has little hope, even with a stellar run through the Pac-12. The 49-3 loss to Georgia stained the Ducks’ resume for the remainder of the season.

Now, a few words about the collective.

Through three weeks, the Pac-12 is 24-9 in non-conference play — a substantial improvement over last year’s 16-16 mark at this point.

The conference has beaten two ranked Big Ten teams (Michigan State and Wisconsin), is undefeated against the FCS and has just two losses to Group of Five opponents. (More on those in a moment.)

At worst, the Pac-12 will finish with a 24-12 mark — an average of two wins per team, which is important: Win twice outside of league play, and you need just four conference victories to qualify for the postseason.

Notably, at least four teams will conclude non-conference play with a 3-0 record: Washington, Oregon State, Washington State and UCLA. (USC and Stanford could, as well.)

And it could have been five, given how close Cal came to victory at Notre Dame.

The Bears missed several chances but were on the wrong side of a preposterous offsides call (by ACC officials) on an errant Notre Dame field goal in the second quarter.

Given a second chance, the Irish scored a touchdown that provided the winning margin.

Everything about the Pac-12’s postseason remains muddled, but we have plenty of clarity on the regular season: The quality of play across the conference is better than it was last year by an order of magnitude.

Coaching changes have resulted in major upgrades at two of the Pac-12’s premier programs, USC and Washington.

The quarterback play is equal to, or better than it was, at most schools (USC and Washington top that list, as well).

Transfers have made a massive impact, and not just at the quarterback position.

And the COVID hangover — the lack of practice and game experience in 2020 that affected performance at the start of the 2021 season — has been completely flushed from the system.

From here, it appears the Pac-12 is headed for its best regular season since 2017, when it placed four teams in the final AP poll and had two (USC and UW) participate in the New Year’s Six.

We mentioned above that two teams have suffered losses to Group of Five opponents.

Those teams would be Colorado, which was thumped at Air Force in Week Two, and Arizona State, which lost at home to Eastern Michigan on Saturday night.

The winless Buffaloes have been outscored 128-30 in three games and are clearly the worst team in the conference, if not the entire Power Five. They are unwatchable. (We know that because we have watched.)

Meanwhile, the Sun Devils are in a fragile situation on and off the field thanks to the combination of an undisciplined team and the NCAA investigation.

The Sun Devils are 1-2 and now face Utah, USC and Washington in succession.

Because of coach Herm Edwards’ seemingly wobbly future, it’s not hard to envision the players losing interest and urgency if the losses mount.