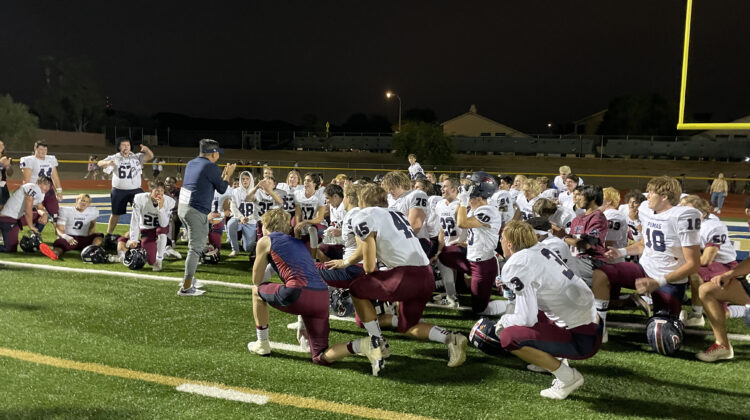 After defeating Desert Vista 28-7 on their home turf, the Perry Pumas are beginning to prove their potential for the 2022 season under new head coach Joseph Ortiz. The Pumas opened their season on the road in Las Vegas and returned to Arizona with a win. Ortiz said he preached to his players that the goal for Week 2 was to go 2-0.

Despite a delayed start and rainy monsoon conditions, the Pumas proved they may be a force to be reckoned with this season. Ortiz said he was impressed with how his defense was able to power through “sloppy” conditions and reiterated that his defense was nearly flawless in his post-game chat with the team.

The message from @JosephO24
🔹the @perrypumas can play some solid defense
🔸the goal was to go 2-0 but they wanted the shutout against the Thunder. A shutout is their next goal
🔹@jackamer_3 can adapt to any situation pic.twitter.com/BcuJY979jX

Jack Amer proved that he can adapt to any situation, including sloppy ones.

“It was a wet day and our whole game plan was to throw the ball but because of the rain we had to run and he took the game on his legs,” Ortiz said.

Senior running back Brock Ford had to sit out against Desert Vista due to a minor injury (bruised knee) but his younger brother was able to step up to the plate. Sophomore running back Maddox Ford scored the first touchdown of the game for the Pumas.

Maddox Ford Is in and @perrypumas leads desert vista 7-0 with 7:42 left in 1Q @AZHSFB pic.twitter.com/XDFAqHH8Rv

Heading into the fourth quarter the Pumas were going for a shutout with a 21-0 lead over the Thunder. Roan Martinez was the answer to the Thunder’s scoreless game finding the endzone with just over nine minutes left to play. However, the Pumas quickly answered back and ultimately won by 21 points. The defense has their sights set on a shutout after coming close against the Thunder. The next goal at hand is to extend their record to 3-0.