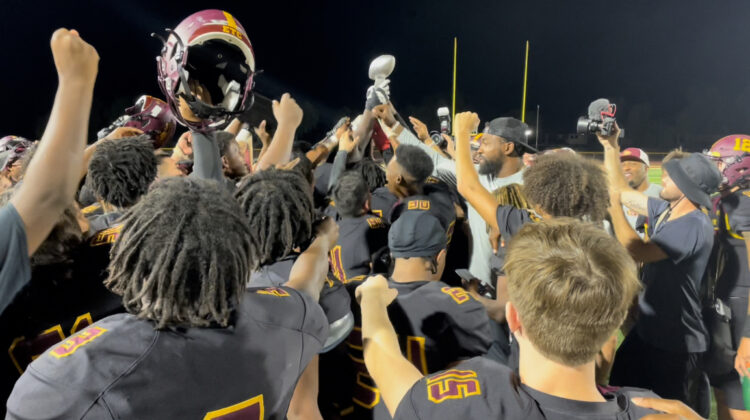 The Mountain Pointe Pride defeated the Desert Vista Thunder, 63-35. After losing to the Thunder in OT in 2021, the Pride came into the annual Tukee Bowl hungry for a win and an opportunity to tie the series.

This rematch was “personal” for Mountain Pointe wide receiver Christian Clark who transferred this season from Desert Vista. Even Pride head coach Eric Lauer said the entire team saw a new side of Clark and he has now set a new expectation for himself.

The Pride offense dominated the game. Christian Clark, Randle Parker and Jay’len Rushing all exceeded 100 rushing yards in the game and many others contributed to the Mountain Pointe win.

Mountain Pointe went into the night with a 2-2 record while Desert Vista had a 1-3 record. Clark says it was their loss to Chaparral that really united the team and motivated them to work for a win against their rival.

For @christian6clark this game was “personal” but it was the loss to @ChapfootballAZ that motivated the Pride to battle tonight🏆 pic.twitter.com/5PCGAmP7Gv

The action wasn’t just on the field. The Mountain Pointe student section was putting in work too. Students were dressed for a blackout theme, were singing and dancing in the stands and got stuck completing 63 pushups.

Initially, only a few students were participating in the push-up challenge. However, they had to recruit cheerleaders, parents, other students and even parents to help them get the job done.

The Mountain Pointe student section is ready for their American Idol audition. pic.twitter.com/QQnJSc2uIC

There’s just something about the Tukee Bowl that makes it feel like a small-town rivalry.