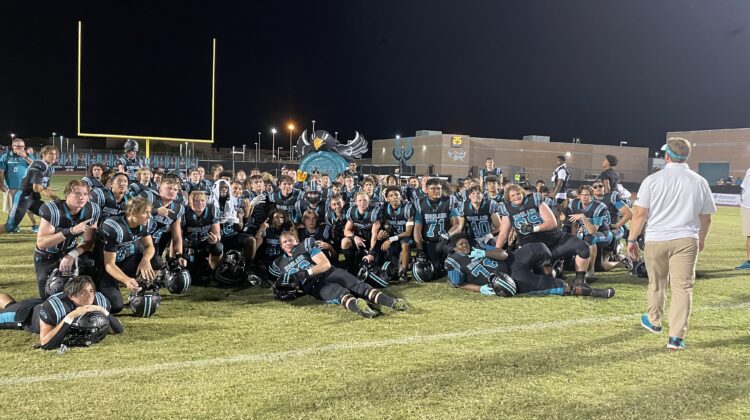 After a 13-0 loss to Utah Lone Peak the Hawks were looking for a big win against Desert Edge. It was homecoming for Highland and the stands (and parking lot) were packed for the big game against the Scorpions. The first half was a slow burner, with the Hawks only taking a 6-0 lead before heading to the locker rooms.

“The biggest thing was I just tried to speak confidence into our O-line,” head coach Brock Farrel said.

Hawks head coach @farrel_brock impressed with @HighlandHawksFB after their big win against Desert Edge.
Going into the locker room at halftime the Hawks were only up 6-0. @Sports360AZ pic.twitter.com/klgkvAr9nw

“We took some body shots in the first half that didn’t seem to be paying dividends and you saw the results in the second half,” Farrel said. “If we’re going to win we’ve got to run the ball, that’s just how we play and how we operate.

The Scorpions posed a major threat heading into the matchup with many D1 prospects sprinkles across the offense.

Desert Edge posed a major threat heading into the game. With D1 prospects sprinkled across the Scorpions offense, it was important for the Hawks to stick with who they are. pic.twitter.com/0pADm8aFww

Senior Chance Cauthen had an outstanding night on offense scoring two touchdowns for the Hawks.

Senior @cauthen_chance chatting about what he expects from his team next week. pic.twitter.com/vibdznO2cb

.@HighlandHawksFB breaks open the second half as @cauthen_chance breaks through the @DEdgeFootball defense to find the Endzone.
Hawks up 13-0 with 8:50 left in Q3. @Sports360AZ pic.twitter.com/n2S2gdeaIK

On defense, he was equally successful managing to recover a fumble and enjoyed being able to show his abilities on both sides of the ball.

Senior tackle Caleb Lomu made it clear that the Hawks went into the matchup hungry for a win after noticing many favored the opposing Scorpions for the “W” tonight. Looking ahead, he says it’s important for Highland football to continue to build their bond.

Next week Highland will hit the road to face Brophy College Prep.