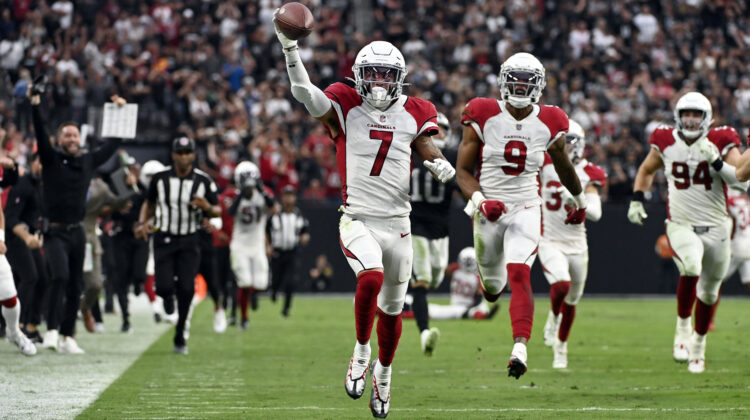 He played sparingly throughout the rest of the game as Cardinals defensive coordinator Vance
Joseph rotated linebackers. But when the Cardinals needed Simmons the most, he stepped up.
A hit-stick collision with Raiders’ wideout Hunter Renfrow jarred the ball free. Then, cornerback
Byron Murphy scooped it up and took it 59 yards to seal the Cardinals miraculous 29-23 come-
from-behind win in overtime, the largest comeback win for the team since 1999.

“Plays are going to come to us as a defense,” Murphy told CBS after the game. “I feel like we
did a good job of making those plays. All of a sudden, at the end of the game, a play came … I
made the play and got the dub for my team.”
Simmons’ and Murphy’s play in overtime was the exclamation point for the Cardinal defense
Sunday, which held the Raiders to just three second-half points after giving up 20 in the first two
quarters of play.

Las Vegas quarterback Derek Carr and running back Josh Jacobs had the Cardinals’ number in
the early going, as the Raiders’ first four possessions of the game ended with points on the board.
Carr found wideout Davante Adams for the first score of the game on a 1-yard pass. He then
connected with tight end Darren Waller for a 3-yard score in the second quarter. Kicker Daniel
Carlson connected on two field goals to give the Raiders a 20-0 advantage heading into the
locker room.

That’s when the Cardinals flipped a switch.

“At some point, enough is enough,” Cardinals quarterback Kyler Murray said postgame. “It’s not
about the toughness or how hard we play, that’s never a question. It’s about executing, playing
faster, get our tempo going. You could tell a difference first half, second half. Those guys
(Raiders) started getting tired … pass rush slowed down. They’ve got two bookend players over
there.

“But when you’re tired … for us, that’s a recipe for success.”
The Raiders had 258 yards of offense in the first half but just 66 in the second. Out of the
Raiders’ four possessions in the second half, they only managed to put three points on the board
behind the leg of Carlson. The turnaround performance by the defense also gave Murray and the
offense new life.

The first points for the Cardinals came on a 5-yard pass from Murray to wide receiver Greg
Dortch midway through the third. The Cardinals then came down the field after Carlson’s field
goal and found the end zone again behind the legs of running back Darrel Williams – who saw
extended snaps in the second half with James Conner exiting the game with an ankle injury.
Murray continued to work his magic as he moved the Cardinals down the field in the fourth
quarter, scrambling in for a touchdown to pull his team within 10 points.

Then, one of the longest – and wackiest – 2-point conversion plays in NFL history happened.
Murray scrambled, stood still, directed traffic and eventually took off toward the pylon to cross
the goal line. The conversion silenced the Raiders’ crowd and took 20.8 seconds to complete.
“I told the guys in the huddle, ‘We gotta get this,’” Murray said. “At that point we were down
16, I believe. If we don’t get the 2-point conversion the game is looking pretty tough for us.”
Momentum was in the Cardinals’ favor, and they took advantage. Another forced punt by the
defense opened the door for Murray to once again work his magic. He methodically moved the
offense down the field, picking apart the Raiders’ secondary in the process.

The drive was capped off by yet another scramble from Murray, who punched it in from 3 yards
out. He then connected with A.J. Green on the 2-point conversion, who had a dropped
touchdown reception earlier in the drive, to tie the game.

“There was no other option for me than to convert those two, 2-point conversions,” Murray said.
The win for the Cardinals, while dramatic and excitement-filled, still exposed the team’s
struggles with managing the game. They were flagged numerous times or had to burn timeouts to
avoid delay of game penalties in the waning moments of the contest.

Arguably the most controversial was one the 2-point try to tie the game. It backed the Cardinals
up from the 3-yard line to the 8 and could’ve been detrimental to their comeback.
The offensive line also struggled to contain the Raiders’ pass rush in the first half, led by
defensive ends Maxx Crosby and Chandler Jones. Murray was sacked once on the day but was
hurried five times and had to scramble several more. Dropped passes became a concern for the
Cardinals, most notably by A.J. Green before his redemption 2-point conversion and Marquise
“Hollywood” Brown, who had a pass jarred loose from his grip that gave the Raiders the ball in
overtime.

But Murray’s athleticism shined yet again for the Cardinals, as he went 31-of-49 for 277 yards
and the two total touchdowns. He also threw an interception and rushed for 28 yards.
While starting slow was yet again a concern, the Cardinals feel they have new life in the young
season. They’ll need that and more when the Los Angeles Rams come to State Farm Stadium
next Sunday.

“We haven’t played a lot of football with this group together and I think in the second half we
saw it come together a little bit,” Cardinals coach Kliff Kingsbury said. “That was a good way to
build some momentum heading into a division game next week.”