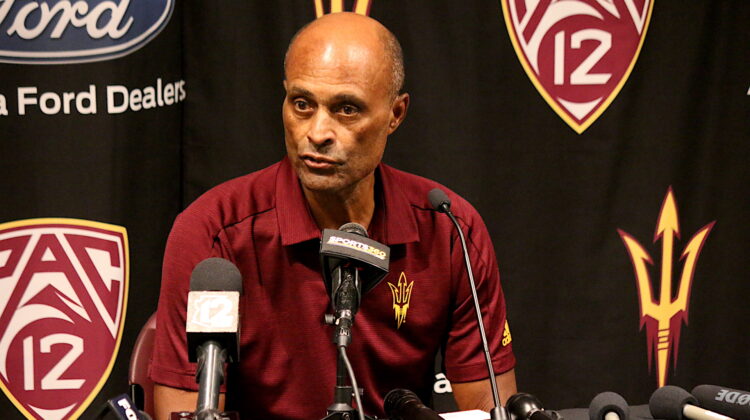 Ray Anderson’s Sunday media availability gave a glimpse of the ASU head coaching position’s past, present and future after the university and Herm Edwards agreed to mutually part ways.

The final step of the Sun Devils’ and Edwards’ split was the 30-21 loss to Eastern Michigan. The Sun Devils lacked a sense of urgency and have three straight ranked opponents staring them down to open Pac-12 play. Anderson described what went wrong so far this year and as a whole when he looks at Edwards’ tenure.

The Sun Devils announced running backs coach Shaun Aguano will serve as the interim coach and will be considered to lead the team beyond this year. The former Chandler High School coaching legend has helped oversee one of the program’s strongest position groups. Anderson described the attributes that made Aguano the choice to lead the program moving forward.

The Sun Devils went all-in on their Pro Model experiment, and there were some positives to implementing that style when it came to player development. But the ever-changing landscape of college athletics meant a new playbook week-to-week, and finding a head coach long-term that can embrace the new era of college football – from NIL to analytics – will be important for the Sun Devils’ sustained success.

There will be plenty of questions, rumors and analysis as ASU ushers in a new era. Buckle up, folks. It’s just getting started.