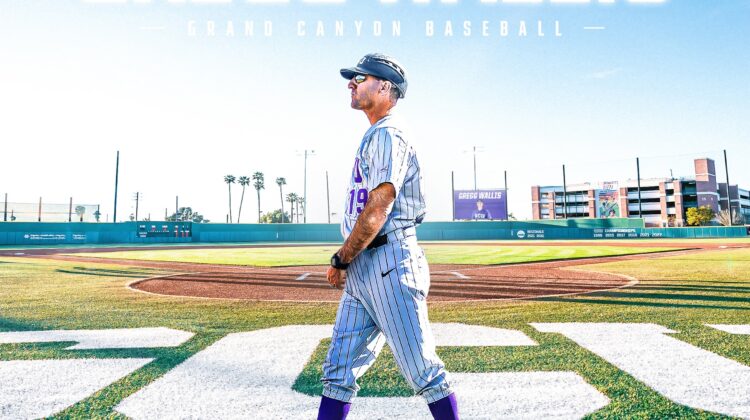 Four years of waiting and three years of falling short. Then finally, it all happened.

Grand Canyon University’s baseball team lifted its first WAC Championship. “Frankie Scalzo was on the mound,” Gregg Wallis said. “It was a one-run game, and he threw a 97mph fastball, and that was strike three.” That was in 2021. And so far, the WAC Championship has been Coach Wallis’ favorite memory with GCU.

Coming off a successful 2022 season, where GCU reached the NCAA Stillwater Regional, Andy Stankiewicz, the then head coach, moved on to the University of Southern California. That left the Lopes head coaching spot open and primed for Coach Wallis. On July 8, 2022, Wallis was named the head coach for GCU after ten years with the program.

“I’ve had so much invested in this university and its baseball program,” Wallis said. “When I got the chance to go back, my family and my wife were overjoyed, and we felt like we had been blessed.”

Earlier in the 2022 offseason, before Stankiewicz left for the Trojans, Wallis had accepted an assistant coaching role at Ohio State, but he couldn’t stay away from the Grand Canyon State for long.

Through his 17 years of coaching on the colligate level, Wallis has gotten familiar with how things work on and off the field. Over time he’s built up a reputation as an outfielders coach and top recruiter. Moving forward, he plans to continue building incoming solid classes and find players that can help to progress the program. “This school is such a tremendous attraction that we can get them to want to come to GCU,” he said. “It’s not going to change. That was one of the best things about coming back.”

Despite his familiarity with the team, Wallis has hired a new coaching staff. Joining him in the purple and black are former big leaguer Jack Wilson and development coach for the Mariners, Nathan Bannister. “Jack is a tremendous instructor,” Wallis said. “He played shortstop at the major league level, so he’s been where all our infielders and infield recruits want to go,” Wilson was easy to get to join the team, he’s always had a dream to coach D1 baseball, and his son, Jacob is a star on the team. “Words can’t explain!” Wilson said. “Thank you to my Wilson ladies for allowing Dad to pursue his dream. I can’t wait to get started! Lopes up!”

“Coach Bannister is a local guy,” Wallis said. “He’s developing pitchers in professional baseball, so I really wanted to add that experience to my staff. He also pitched in Omaha.” With Bannister already having a house in Phoenix it was an easy yes. “I’m excited to return home,” he said. “But, I’m more excited to see this program take the next steps.”

In addition to the new hires, Wallis is looking to add a volunteer coach and director of operations. He is specifically searching for an alumnus.

Building a core around experience and goals was essential for Wallis. For the season, he plans to continue following the map Stankiewicz laid out over the past couple of seasons. Winning a regional is top of mind priority, but he wants to build towards an Omaha-bound team in the future.