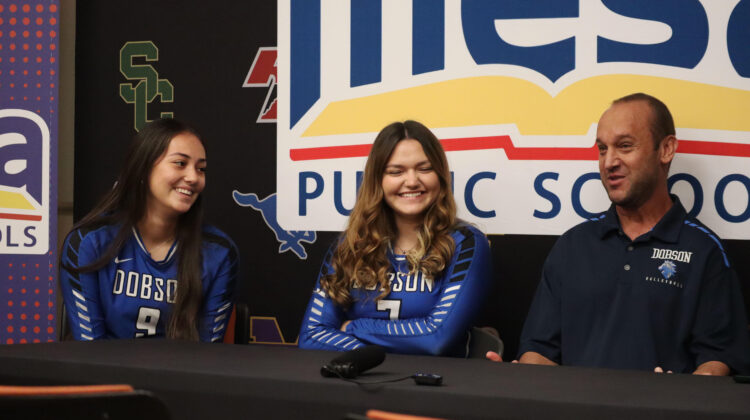 After an entire summer of uncertainty, Jim Van Wicklin was named head coach of the Dobson High School girl’s volleyball team just two weeks before the start of the fall semester. Members of the program were in shambles after they found out their head coach had no longer held his position. Senior libero Kelsi Dieu said the girls discovered this information on the last day of their spring semester“It was really unfortunate because we had all these plans to go to college camps and summer workouts,” she said. “And then we didn’t have that, so it was like, what do we do? ”The team went 3-22 last fall, and senior opposite hitter Nadia Range said the girls felt worried about the program’s future. However, she said there was an instant energy change the first day Van Wicklin walked in. “His impact has been crazy because you can already tell in the first few weeks we have changed a lot,” she said. “It was like a fresh start.”

Van Wicklin is a former Defensive Specialist for Middle Tennessee State University and began coaching for his alma mater for five years as an assistant head coach immediately after graduation. But it was not until recently, when watching his 12-year-old daughter play volleyball, that he returned to the court. “I sat on the sidelines and watched coaches that had no idea what they were doing,” Van Wicklin said. “Yelling at her for doing the wrong technique. So I looked at her and said, ‘do you want me to do this?’”

Since then, Van Wicklin has tallied up his coaching experience to 20 years and in doing so, highlighted his appreciation for the difference in coaching girls.“Boys are fun, don’t get me wrong,” he said. “But empowering women and helping build a skillset, I love everything about it”Van Wicklin said his coaching philosophy has dramatically changed since he first started as he has spent the last three years focused on anxiety in sports and how he can limit those behaviors from his players. He said he and his coaching staff incorporate anxiety into their practice by warning the girls that the next 15 minutes will be tough. “And they do the first thing that most people do, they yell at each other,” he said. “But then they find out quickly that that doesn’t work…What I get out of it is girls who love each other and love the sport.”

Dieu said that one of the five key mottos the team holds true is always to show respect to themselves and their teammates and to grow as human beings. “He’s really passionate about making sure we’re good humans,” she said. “Not just on the court but outside of volleyball.”Van Wicklin said it is essential that the girls have relationships to have someone they can turn to when all of the social pressures and uncertainty about the next steps for high school students start to hit. “Winning isn’t everything, growth is,” he said. “They’re developing skills that are going to help them be great human beings and I feel better about that than I do about a win”He added that he makes a point to instill confidence in the girls so they can prove themselves this year. More specifically, for them to believe they can accomplish their goals despite the statistics of last season.  “Obviously we’d love to make state and have some wins,,” he said. “But realistically I just want them to look at each other…and go ‘Wow, we’ve grown. We’re a lot better than we were before.’”