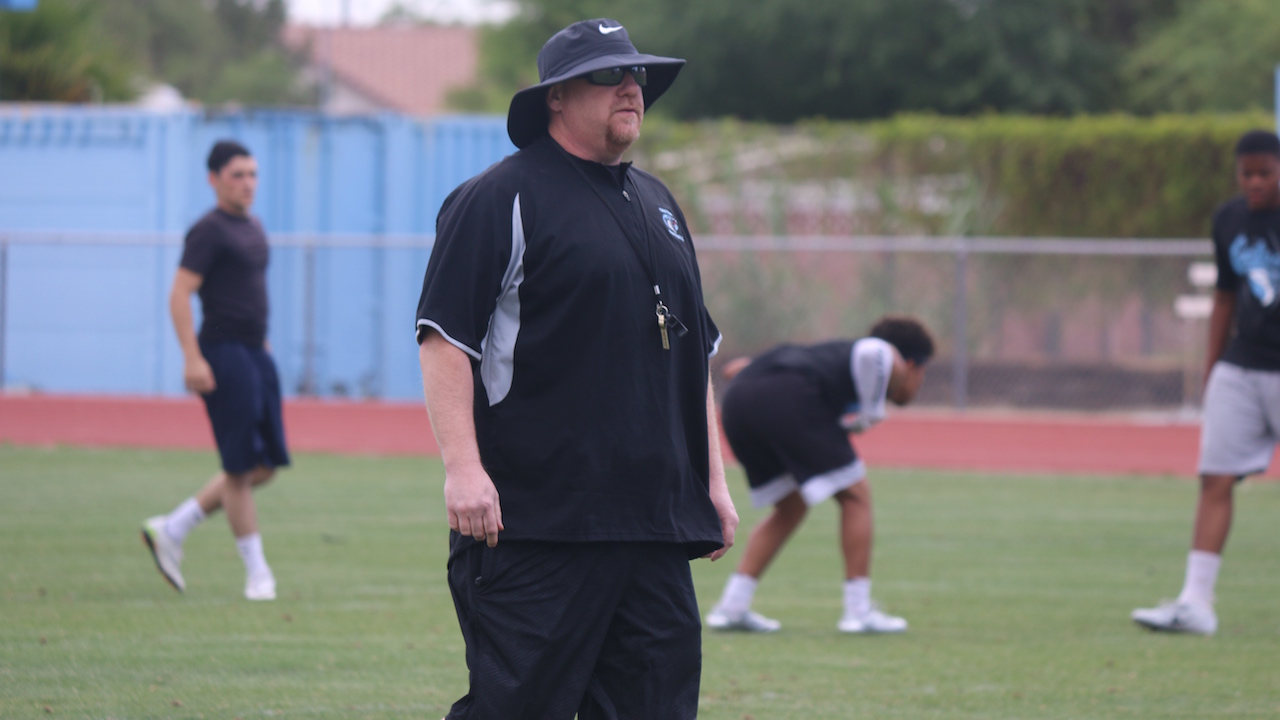 The fields are almost set and offseason preparations are on the verge of paying off. New stars emerge, new staff members join the scene, and in many places in Arizona, there are some new faces at the helm of the programs.

As the season-opening kickoff looms, let’s take a look at some of the new head coaches on the westside, including a few familiar faces.

A New Chapter of Tradition

In one of the greatest seasons in Cactus Cobra history, the AIA ranked the Cobras as the fourth best team in Arizona in 2021, earning them a spot in the Open Division Playoffs. While it was disappointing for their undefeated regular season to result in a first round out against eventual Open Division Champions, Saguaro, the Cobras have some veterans returning to cap off their high school careers.

Alongside Cactus’ new classification moving from the 4A Conference to 5A, a new head coach hops atop the helm of the program. After joining the Cobras in 1999 under Larry Fetkinheir and spending the past 3 seasons with Joseph Ortiz, Brian Belles made the decision it was time for him to pursue the head coaching reins following Ortiz’s departure to Perry.

It will be the capstone season for Will Galvan, who has made a massive imprint on the Cobra tradition in his three seasons so far, featuring an immaculate stat line. After playing defense as a freshman, Galvan’s career numbers include 2,561 passing yards, 841 rushing yards, 201 receiving yards, 72 total tackles, 2 defensive interceptions, and 469 punt yards, on top of 55 total offensive touchdowns. Galvan will undoubtably be a primary leader on and off the field in his send off season.

Last year, Galvan was thought to play more reps at WR but ultimately became the lead quarterback. The idea is the same again this season to move Galvan to a potential triple-threat athlete playing QB, WR, and potentially run the ball. Galvan, Danny Avila (JR), Braiden Lagafuaina (JR), and Rudy Gonzales (SR) are all listed at quarterbacks for the Cobras.

“It is their job to not just be a leader by example but also a vocal leader,” Belles said. “Both of them are growing in that capacity and our season will depend on getting the others guys to buy into our culture and ways of doing things both on and off the field.”

In 2021, Cactus returned nearly all 22 starters from the previous season with a bundle of chemistry and talent. While CHS retained much of last year’s talent, there will be far more holes to fill on both sides of the ball. Junior, Jordan Davis, and sophomore, Nikko Boncore will get their chance to shine with the receiving core after only playing in three games last season. Meanwhile, linebackers, Raymond Jones and Kaden Huisinga, cornerback, Ashton Wendelshafer, and defensive lineman, Matai Carter are some fresh faces to watch on defense. Coach Belles will also be watching offensive lineman, Aaron Lopez.

After three remarkable seasons in the 4A Conference the Cobras will become one of the AIA’s many test gerbils with their infant football realignment system based on a mixture of enrollment and a program’s past three years of success. Cactus will be one of the smallest schools in 5A with a listed enrollment of 1,194 students compared to their season opening opponent Desert Mountain’s 1,952 students or Sunrise Mountain’s 2,060 students. The Cobras faired well against big schools last year and look to advance on that momentum with many new faces on the field.

Another long-time west side power will have a new head coach in 2022. Jason Golden was promoted from defensive coordinator to the head coach of one of the oldest programs in the state following the retirement of Will Babb. Golden becomes just Peoria’s 7th different head coach since 1955.

After a bumpy stretch of losses to open 2021 against opponents such as 5A Ironwood and 5A Desert Mountain, the Panthers ended the year on a 3-1 roll in the 4A West Valley Region with their only loss against rival, Cactus, in the season finale. Unfortunately, the Panthers concluded the season at 4-6, two spots shy of making the 4A Tournament. It was Peoria’s first time missing the postseason since 2015.

2022 Team Camp in the books. Thank you @PrescottFB for hosting! pic.twitter.com/QzXzpOzUnt

The Panthers will be young in a multitude of positions this season but return a slew of veteran leadership on both sides of the ball. Senior, Josh Holiday, returns to the helm of the offense after averaging 149 passing yards per game on top of 12 passing TDs in 2021. Fellow leaders on both sides of the ball for Peoria includes TE/OLB Elijah Ward, SS/WR Saieed Hasan, and C/MLB Eloy Navejas.

A pair of juniors that Coach Golden will keep an eye on includes OG/DT Jose Cisneros and running back Jalen Dupree. Dupree rushed in four touchdowns and both Dupree and Cisneros took snaps on defense last year.

Peoria will open their season with a three-game homestand beginning with Arcadia on Sept. 2. The 38th edition of the Peoria vs. Cactus rivalry game will take place as a non-conference match on Oct. 7 at Cactus.

After nine years at Valley Vista and a year away from coaching, Josh Sekoch enters the deep southwest valley to become the head coach at Youngker. It has been difficult for the Roughriders to find a foothold in football with only one winning season since adding a varsity program in 2009. Youngker was only able to play four games in 2020 and went 2-8 in 2021.

Sekoch was off-campus from February until the beginning of summer workouts. A major benefit to the coaching transition has been Valley Vista alum, Creston Cooledge, a recent Weber State grad and former offensive lineman for the DI university. Cooledge was on campus daily and has pushed the team to a higher level.

“With the entire staff being new it’s been an different transition than when I took over in 2011 at Valley Vista. We spent time just laying the ground work of the culture change, increase in expectations our staff has.”

Coach Sekoch was extremely impressed this summer by the YHS receiver and quarterback rooms following perfect attendance during summer workouts. Leading the way in the receiving core will be seniors, Evan Aguirre and Caleb Stevens, alongside juniors, Landon Edwards & Julius Barber. Aguirre was the leading receiver for Youngker last year and even threw a pair of touchdowns.

Quarterback, Jacob Lira, returns as an offensive leader after passing for 1,249 yards and 19 TD in eight games during his sophomore campaign last year. Senior, Sami Agbeshie, will be a swiss army knife for the Roughriders while he takes snaps as a running back, slot receiver, and special teams returner. On the other side of the ball, eyes will be on Giancarlos Navidad, Chris Moreno, and Demias Pablo, who all impressed this offseason through their work ethic, commitment, and play.

One of the most pleasant surprises of the offseason has been sophomore offensive lineman, Hayden Williams, who showed off his athleticism and 6’ 6” height alongside his desire to be great. Coach Sekoch also has his eye on defensive back, Josh Brill, to be an up-and-comer on the roster.

Youngker will again reside in the 4A Southwest Region this year and starts the season against sister school, Buckeye Union. The Roughriders will only play four home games in 2022 and opens the year with three straight road games followed by three straight home games.

Arizona high school football begins this weekend for 1A, 2A, and 3A schools, which means it’s time to pull those belts tight and get ready for the 2022 football ride! Be sure to visit and support your local schools as they hit the field.

Join in on the conversation on Twitter using #FridayNight360AZ and follow @Sports360AZ to keep up with the action from across the state on Friday nights!