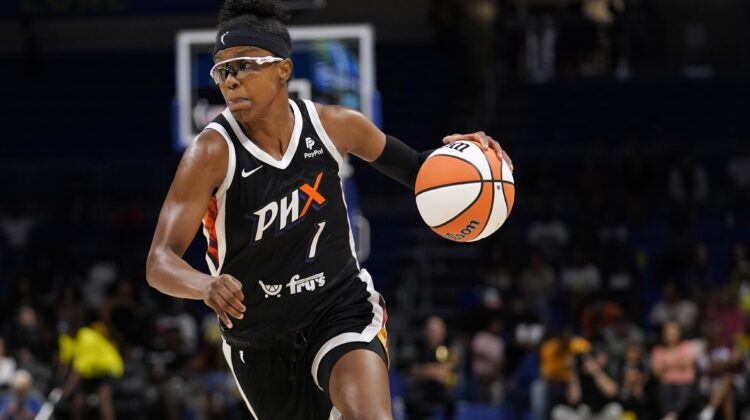 In a season of impossible circumstances, the Mercury has a chance to do the improbable.

“We are very happy to be playing the last game of the season where we are in control of our destiny to make the playoffs,” head coach Vanessa Nygaard said. “I would say there were some stretches during the season where no one would think that’s even a possibility.”

As if Brittney Griner’s wrongful detainment isn’t enough for them to deal with.

Not only did it start the season on a rough note emotionally, but on the court, it completely changed everyone’s roles.

While there were flashes of what could’ve been, the eventual contract divorce between Phoenix and Tina Charles turned out to be best for both parties.

But now we’re talking about adjusting from having two of the top bigs in the league.

Small ball became one of the keys to turning the season around, as Phoenix rattled off seven wins in the eleven games, their best run this year.

The defense was tougher, the communication was stronger, ball movement and off-ball movement were both apparent, and you could see Nygaard’s system coming together.

Then, in the thick of the playoff hunt, they lost both Diana Taurasi and Skylar Diggins-Smith for the rest of the regular season.

“We couldn’t count on anything this season to go our way at any moment,” Nygaard said. “We could only count on us.”

After winning two of their last three, it’s down to their final matchup with the Chicago Sky.

“It just shows you how much character they have,” Taurasi said. “There’s always little times in your career where you have these opportunities that you can either take advantage of or you can look away and say, ‘it’s too hard.’ I think everyone on this team has looked at it as an opportunity to play…I’ve been so proud of them.”

Players like Brianna Turner, Sophie Cunningham, Shey Peddy, and Diamond DeShields have answered the call in their increased roles.

“That’s why you play a team sport,” Taurasi said. “That always brings an opportunity for other people on the team and they’ve taken full advantage of that so that’s been pretty amazing to watch.”

DeShields has averaged nearly 18 points, five assists, and five rebounds in their last three games, but she’s always had that in her bag.

“I have the capacity to do a lot of different things as one of the more versatile players in my position and it’s just been really fun to be able to showcase that,” DeShields said. “It’s not new to me, but it’s been a while. I’ve been through a lot but I’m finally starting to feel good and feel like myself again and that’s just a blessing.”

Sophie Cunningham has continued to make her case for Most Improved Player, scoring 15+ points in six of Phoenix’s last eight contests.

And I haven’t even gotten into Shey Peddy setting multiple career-highs, Jennie Simms becoming a consistent starter, and Megan Gustafson’s growth as a vital part of the bench mob.

Point is – the odds mean nothing to this group and they’ve proven their willingness to sacrifice for success.

“We’ve been riding with each other,” guard Jennie Simms said. “We see one down, we’re able to pick the other up and we’re able to ride together and know how much energy we need to have to make it to the playoffs.”

Today, one of the toughest teams in the W will be tested once again.

Of course it’s led to this – a shot at the playoffs on the line against a top three team and the same squad that beat you in the WNBA Finals last year.

“That’s been the backbone of this team for a long time,” Taurasi said. “It’s always what can you do as a collective group to get you to a point where now we’ll hopefully have a playoff series.”

There are scenarios in which the Mercury still make the postseason with a loss.

If New York beats Atlanta, Phoenix is in.

If Connecticut beats Minnesota, Phoenix is in.

If both the Dream and the Lynx win, the Mercury is out.

Whatever the result, it’s a movie-like ending for a movie-like season to say the least, so grab your popcorn.