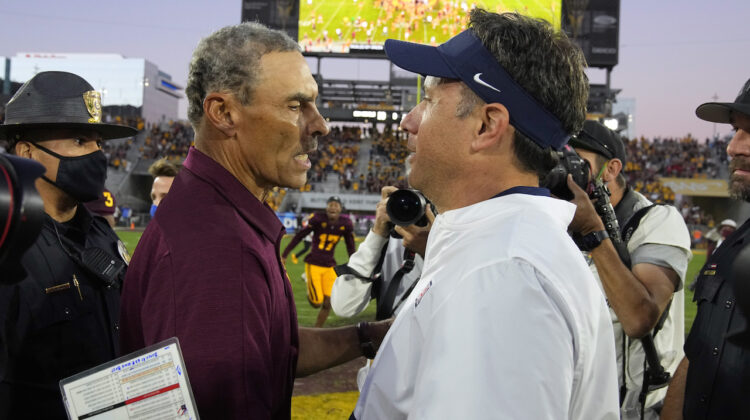 The Pac-12 is now a few short of a dozen now that USC and UCLA will be joining the Big Ten starting in 2024.

So where does that leave the rest of the conference?

If we revisit the conference restructuring about 15 years ago, changes can come quickly and a conference that is bleeding members needs to stabilize quickly – especially when two headliners like the Trojans and Bruins head elsewhere.

A year ago, the Big 12 brought in Cincinnati (a college football playoff team), BYU (a brand with far-reaching audience) as well as Houston and UCF (a consistent football programs over recent years) to help shoulder the load of the departing Texas and Oklahoma. No one is going to say the additions are a net positive when you’re losing two powerhouses, but these moved stabilized a teetering conference on the brink of implosion.

Could the Pac-12 make similar additions?

These departures – even with replacement programs like San Diego State, Boise State or Fresno State – leave the conference softened considerably compared to a few days ago. Even with the LA schools, the Pac-12 was struggling to navigate this modern era of college athletics.

A current Pac-12 without the LA teams is a souped-up version of the AAC, and that’s assuming the rest of the conference stands pat.

Which is where things get complicated for new conference commissioner George Kliavkoff. In each iteration of conference realignment, we’ve seen one or two dominoes fall and then a vacuum effect kick in. Where can the other teams in that conference find footing? Is it best to stick with their current situation? They are essentially handshake deals at this point.

Which is why the Big 12 might be enticing to the Arizona schools. Many – including Jon Wilner – have pointed to this potential move along with Colorado and Utah could make some geographical sense.

ASU can offer the fifth biggest city in population and 11th biggest TV market. The Sun Devils were a football program was one seemingly on the rise before the NCAA recruiting investigation and a men’s basketball program that hasn’t been shy about competing against quality programs. In terms of “money-making” programs, Arizona can offer a men’s basketball team under Tommy Lloyd that is seemingly set up for another run as a perrenial power and a football staff that can work the recruiting trails. We’ll see if more wins follow an impressive offseason.

Both schools offer elite Olympic programs and women’s sports. Both baseball programs can land anywhere between above-average and championship-contending on a given year. Adia Barnes in the Big 12 could really do some damage.

The Big 12 boasts three teams in the top-20 last year with Oklahoma State and Baylor finishing in the top 10. If you want to count the incoming schools as well, the conference would have had six total teams ranked to end 2021.

It may not be the top of the mountain in terms of college football competition, but it’s pretty damn good.

It's … not completely horrible?

The Texas (specifically Dallas) media markets and recruiting trails would help soften the blow of no longer playing consistently in the Los Angeles area. The men’s and women’s basketball conference would be among the nation’s best with Arizona, Arizona State, Kansas, Baylor, Houston, Texas Tech and BYU

Even better, could the two conferences not just piecemeal a new identity together, but fully combining forces? This would be like when Woody and Buzz Lightyear got together at the end of Toy Story. One conference has literal Cowboys. The other is going through an identity crisis when he realizes his laser beam and flight capabilities are gone with USC and UCLA out the door.

Yes, a it’s a bit of an odd pairing, but odd pairings are a necessity in college sports right now if you’re not in the SEC or Big Ten.

As someone who grew up on the Pac-10/12, this keeps some semblance of the previous conference and the geographical pride while also making it possible to navigate the new world of college athletics.

There are options to move forward, it’s just a matter of knowing when to stay where you are and trust the new conference leadership or to pull the rip-cord and start off in a new home.